First off, I want to say that I love Game of Thrones. I have an unhealthy obsession with the show, the books, everything. Even this episode has some good moments. Seriously, watch it.

But…. let’s face it, the episode Breaker of Chains sucked because….

Alright, we’ve seen him seducing everyone in sight now for several episodes. He’s bisexual and proud. Got it. Can we talk a little more about his whole hate-the-Lannisters-because-they-murdered-his-sister thing? Or hell, maybe even give us more information about Dorne. That’d be cool. 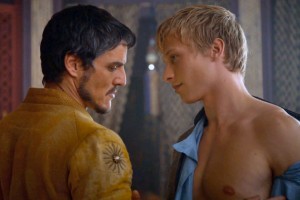 When we first met Littlefinger, he sounded like a normal dude that felt just a bit…slimy. Now, as he makes a surprise appearance as Sansa’s savior (or kidnapper, your choice), he sounds like an overly dramatic Disney villain.

Maybe he felt like he needed to use his pirate voice since he was on a ship. All aboard the S.S. Sleazeball!

It’ll be interesting to see how this scene changes Jaime’s redemption arc in the show, as well as how his popularity with viewers holds up. The scene was drastically changed from the book version in which Cersei objects at first, and then willingly participates in said twincest.

But apparently siblings having nasty sex in the Sept where their son lays dead wasn’t disturbing enough for the HBO team…. so they threw some rape in for good measure.

All I can think of is how awkward it would be to be Jack Gleeson while filming this. 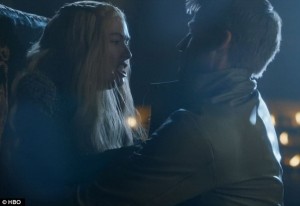 Maybe HBO made them cannibals to remind us that even though our favorite wildlings just helped slay a ton of innocent people, they are not the bad people. The bad wildlings eat people, the hot redhead Ygritte doesn’t, she just kills them. No biggie. Now I understand that the CGI is crazy expensive, but considering Daenarys has three giant dragons that follow her around all the time, it would make sense to see them in the battle scene from this last episode. What were they doing, spending the day at dragon day care?

I just wanted some cool dragon action. Is that too much to ask? 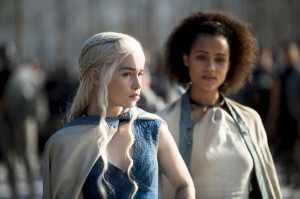