Posted On October 4, 2018 By Ascher Robbins In Featured, Politics, Rants, The Scene

When Brett Kavanaugh is (almost certainly) granted his spot on the bench of the highest court in the land this Saturday, it will represent yet another un-probed depth of the American political system – one level below the last false bottom that we assured ourselves was the floor. Whether you believe the words of Judge Kavanaugh, Dr. Blasey-Ford, both, or neither, we can all agree that the events of the last week have been an ugly reminder about the political climate in which we live in 2018.

Even leaving aside the most alarmingly conspicuous aspect of that odious climate – that men who have been accused of sexual assault by multiple women can still ascend, largely unencumbered, to the highest offices in the land – the whole Kavanaugh debacle has shone a light on the tattered husk of what was, in the not-so-distant past, a fairly functional democracy. Our country is terminally sick, and partisanship is the football-sized tumor. Indeed, it seems that our two-party system has reached – no, outlived – its breaking point, and now the two parties stagger on, in a pathetic three-legged race, that seems destined to end with both flat on their faces in the mud, joined at the hip. It’s a zero-sum game governed by Newton’s Third Law. If we go down, we go down together, and this ain’t with the glory of Bonnie and Clyde; no, it’s mutually assured destruction, sans nukes.

Over the past several decades, Americans have been heading to the poles. No, not the polls – I wish more Americans would do that. The poles, North and South, further and further from the center. Partisanship is at an all-time high, both in the halls of Congress and the streets of America at large. Whether it’s the chicken or the egg in this instance, the greater the division in Congress, the greater division amongst the people, and vice-versa. It’s easy to see that bipartisanship is all but dead and gone in 2018. For members of Congress, voting in line with colleagues across the aisle is now a great way to punt one’s chances for re-election. With rare exceptions – thanks for that last act, Mr. McCain – both Democrats and Republicans alike can be counted to vote exactly, unflinchingly in line with their party.  For the visual learners out there, there is perhaps no better representation of this phenomenon than this graphic from Business Insider. It wasn’t always this way. Sure, adherence to the party line has long been a part of American politics, but it hasn’t always been American politics. There was a time when both parties stood for something more than DEATH TO THE DEMOCRATS and DEATH TO THE REPUBLICANS. But alas, that is where we are in 2018. Winning is everything. Embarrassing the other party is everything.  If you’re in the minority: OBSTRUCT, OBSTRUCT, OBSTRUCT. If you’re in the majority: RAM EVERYTHING THROUGH NO MATTER THE COST. FIRE AND BRIMSTONE. It’s a sad reality of where we are, and there’s plenty of blame to go around. Let’s recap.

The history of partisan politics in America is a long, muddled one to be certain, but I only have so many words here, and I don’t want to bore you to death, so let’s start with a time period that feels like many eons ago – the Obama presidency. In President Obama’s second term, he was hamstrung by a GOP-controlled senate and house, which prevented him from doing, well…basically anything. Senate minority leader and famous turtle Mitch McConnell vowed that his party would obstruct everything the incumbent president put forward, and the GOP followed his vow to a tee. In November 2013, Democratic Senate Majority Leader Harry Reid had had enough of McConnell’s nonsense, and, tired of GOP obstruction, made a choice that ultimately set a dangerous precedent that has come back to bite the Democrats. After days of Republicans filibustering President Obama’s nominees for the court of appeals for little more than political gamesmanship, Reid and his Democratic peers passed legislation that did away with requiring 60 votes to override a filibuster in such instances, instead changing the Senate rules to require only a simple majority. The Democrats celebrated like they’d won the World Series, and the Republicans fumed. At the time, many politicos and journalists warned that Reid’s “nuclear option” was likely to have consequences down the line. However, the Democrats left one exception in the new senate rules, granting the Republicans the “courtesy” of still requiring 60 votes to break a filibuster to confirm a Supreme Court nominee; after all, getting some sort of bipartisan agreement on a Supreme Court nominee had historically been relatively simple.

The next three years of the Obama Administration passed by, contentiously. As the lead-up to the horrifying 2016 election (our first false bottom!) showed, partisanship ruled the day. The GOP, in particular, made no attempt to hide its true agenda – making America great again meant DESTROYING the Democrats, undoing everything President Obama did, and exacting revenge. This began with the passing of Justice Antonin Scalia in February 2016, when the Republicans, in an unprecedented move, refused to even hold a hearing for Obama’s replacement nominee, Merrick Garland. Garland was, by most accounts, the sort of perfectly reasonable, somewhat centrist nominee that has been confirmed without any difficulty time and time again in the history of this country. But McConnell had picked his hill to die on – no nominations would be heard until after the election, no matter the political fallout. Obama’s hands were tied, and Garland’s nomination was never brought before the judiciary committee for consideration. The Republicans had a tit for the Democrats’ 2013 tat.

Alas, the partisan games had only just begun. As the 2016 electron grew closer, Republicans glommed on, reluctantly at first, to a Presidential candidate who was, at best, a lukewarm conservative, hoping (correctly) that the empty space between the future Pussy-Grabber-in-Chief’s ears could be filled with enough treacle whispers to further their agenda. The GOP sold out for a chance to punish the Democrats. One by one, almost all of the GOP’s congressmen, even the Evangelicals, backed a man who had been thrice-married and consorted with porn stars (not to mention allegations of sexual assault, infidelity, and Russian “pee pee” parties). Winning, beating the Democrats, was worth it all. And so, the Republicans strapped themselves to the balls of a loose cannon. And somehow, horrifyingly, Trump won. The libs had been owned. In some ways, the vindication was likely that much sweeter for the GOP that they won with that candidate, that joke of a man, that uninformed, ranting bigot, against one of the Democratic Party’s most respected figures. McConnell and his minions got to work. Republicans controlled the White House, Senate, and House. The next target was the Supreme Court. 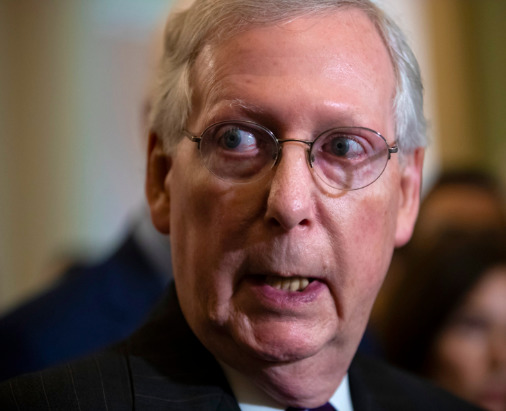 When Neil Gorsuch was nominated by President Trump in January of this year, it was the Democrats turn to be indignant and make politically imprudent, impulsive decisions. Knowing full well that Mitch McConnell was hell-bent on revenge, they nonetheless decided to filibuster Gorsuch’s Supreme Court nomination. It is certainly understandable that the Democrats felt outrage at the “stolen” seat – after all, in basically any other political climate, Merrick Garland would have had a hearing at a minimum – but, much like Garland, Gorsuch was cut from the same cloth as any number of past Supreme Court Justices; he was, and is, by most accounts, a man of integrity that is, at least by precedent, qualified to serve on the bench. Even as recently as a 2005, a Republican pick for the Supreme Court, current Chief Justice John Roberts, was confirmed by a 78-22 majority. Oh, the good ol’ days. But Senate Minority Leader Chuck Schumer and the rest of the Democrats did not relent – they insisted they would filibuster any nominee Trump put forward, and Gorsuch fit the profile of being anybody. In an unprecedented move that still surprised exactly nobody, it was McConnell’s turn to invoke the nuclear option this time. The “Supreme Court Exception” was voided, meaning that a simple majority would now break a filibuster on Supreme Court nominees as well. Eventually, in a vote that was close to exactly along party lines, Gorsuch was confirmed. The reality is that Gorsuch was always a lock to be confirmed, and the Democrats used their greatest weapon on a man who, by all realistic standards, was a perfectly reasonable Supreme Court nominee. If only they had saved that tactic to try and block a nominee who had an allegedly odious past, a surly demeanor, and credible allegations of sexual assault against him.

And so, we arrive at the present inflection point in American politics. This time around, the Democrats have a very compelling reason to try and block a Supreme Court nominee. Frankly, Republicans do as well. As recently as a decade ago, steadfastly pushing for a nominee with such baggage would have constituted political suicide – Clarence Thomas aside. But this is 2018, where a probable sexual abuser is the Commander in Chief. This is 2018, where morals and ethics mean nothing next to winning and humiliating your opponents, something which not so coincidentally echoes the grammatically incorrect words of the White House’s occupant. SO. MUCH. WINNING. That’s what it’s all about: for Trump, for Congress, for the GOP base. Make no mistake, there is nothing special about Brett Kavanaugh, unless you consider a man who’s participated in a Devil’s Triangle to be special. Leonard Leo, executive VP of The Federalist Society, and the man tasked with compiling a list of potential nominees for President Trump, literally said of his list of 30 nominees “You can throw a dart at that list and in my view you would be fine.” Brett Kavanaugh is a sliver of a dartboard made up of any rank-and-file, reliably conservative judges. If the GOP was actually concerned about appointing a conservative justice, they could easily withdraw Kavanaugh and do so. But this isn’t about conservatism, it isn’t about what’s best for the country, and it isn’t about picking the most qualified man for a lifetime appointment on the country’s highest court. It’s about Winning. It’s about embarrassing the Democrats. It’s about putting out the fire of the “liberal” #MeToo movement. It’s about killing all things deemed liberal, progressive, and tied to the HOPE of Obama’s 2008 campaign. The only thing the GOP stands for, as currently constructed, is trying to win against the Democrats. There is no policy, no platform, no soul – just a bloodthirsty need to kill its opponents. And that is horrifying.

Brett Kavanaugh might be a horrible man, and he might not – I think I’ve made my opinion clear. But whether he gets confirmed or not, this past week has unearthed some horrible truths about how truly, irreparably broken our political system is. While the Republican Party is the aggressor of late, backed by our embarrassment of a president, it’s hardly like the Democratic Party is worthy of admiration – they are also to blame for getting us into this mess. The chasm between red and blue in our country has never been greater. It’s a fallacy to suggest there’s even much we can do right now. But as we go forward, the solution to what ails our country is trying, if even for a moment, to focus on what’s best for us, all of us, and hold our politicians to the same. If both sides are only focused on winning, each victory will only become more and more Pyrhhic.

How the Pandemic Inspires Us to Focus on Our Health