Posted On April 3, 2014 By Hilary Fitzgerald In Movies

EnterViews is Hilary’s weekly series of interviews with emerging artists via various forms of digital communication.

The Slamdance Film Festival, an anarchic underdog founded in 1995 by a group of filmmakers rejected from Sundance, held its 20th Film Festival in Park City this past January, but the film fun lives on outside the Utah state lines. Slamdance continues its year with a curated travelling series, Slamdance On the Road, taking their films across the country to audiences that otherwise would not have the opportunity to see them.

Tonight, On the Road Presented by Creative Future comes to Los Angeles at the Downtown Independent with a series of shorts “filled with dark stories, psychedelic visions, and dubious observations.”

Two of these films are recipients of the Slamdance Sparky Award for Best Anarchy and Short Documentary Film, WAWD AHP and Glass Eyes of Locust Bayou, respectively. I spoke with these young filmmakers over various forms of technology. The following is the result of email, tweets, missed phone calls, texting, and Facebooking (it’s a word now, really).

Steve Girard is a 26-year old filmmaker living in New York. Girard’s film (co-directed by Josh Chertoff), a tantalizing part-music video, part-animation, part-what-the-fuck-is-that-guy’s-severed-head-being-jacked-off-into, was an undeniable favorite of the festival, not to mention a really fucking catchy tune. Jury Members Kendall & Joey Shanks described it as “Offensive and absurd…WAWD AHP optimizes what the Anarchy block is all about. Audiences won’t forget it, even though many wish they could.” 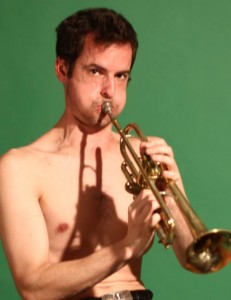 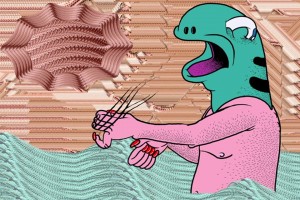 Hilary Fitzgerald (HF): Where did the idea for WAWD AHP come from?
Steve Girard (SG): The cartoon was for a music video I was doing for a British band that I eventually lost touch with. By the time it came around to finishing it, I wanted to be inside of the video. Rapping seemed more refreshing than drawing more.

HF: What made you want to become a filmmaker?
SG: You can make things that aren’t real yet pretty real.

HF: What do you consider yourself first? Filmmaker, artist, musician, human being…
SG: These things overlap a lot. I guess I’ll go with the typical human being thing.

HF: Do you rap often?
SG: No, I’m a closet rapper. I’ve literally only rapped in/in front of closets.

HF: Who do you confide in about your work?
SG: I confide different stuff in different people, so I’ve got everyone’s volumes at different levels. But the answer to this question is my roommate, John.

HF: Where were you when you found out you got into Slamdance?
SG: At an animation job.

HF: What was your favorite moment of Slamdance?
SG: We had a fat party at our cabin with the filmmakers who made “The Greggs.” We all got laid and to tell you the truth, it was just what the doctor ordered. (Shouts out to all the limo drivers who lost everything that night).

HF: What has Slamdance done for your film and your career?
SG: It obviously helped my movie get seen by hordes of different people, which is so good. And I met a handful of folks at Slamdance who I’d love to plow my “career” thru. But I don’t know, its only been like a week!

HF: What have you even up to since?
SG: I’ve been trying to write a feature-length love story about skiers. I’m also making a shorter thing called “Floaters Dot Com” with two full clowns called “Boner Wolf.”

HF: What did you do before this?
SG: I was a boom operator for a reality show about metaphysics.

HF: Do you work better alone or in a group of artists?
SG: Animation is inherently lonely but everything is more fun with other people.

HF: Who are your inspirations?
SG: This artist Marc Bell. This rapper Devin the Dude. This comedian Patrice O’Neal. This musician Herbie Hancock. This animator Allison Schulnik. Seriously, everybody else.

HF: Favorite hobby as a kid?
SG: Drawing battle scenes from Braveheart & gelling a brittle curl of hair to my forehead.

HF: Best paper your wrote in school?
SG: I received a good grade on a Jesse James paper I wrote in the 8th grade.

Simon Mercer is a 35 -year old Canadian Filmmaker living in London. Mercer’s documentary Short Subject is so mesmerizing, you don’t realize it might be weird that you’re falling in love with an old man of the South while he recollects the semi-pornos he used to make in his heyday. It’s that good. Festival-goers, Filmmakers and the Jury clearly agreed, as it was awarded the Best Documentary Short closing night of the Festival.  Jury Members found it to be “a unique and wondrous film that defies expectations veering into a dark absurdity.” 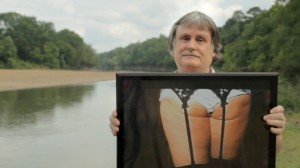 HF (Hilary Fitzgerald): How did you find your subject, Phil Chambliss?
SM (Simon Mercer): My friend Ryan wrote a magazine article about a man in rural Arkansas named Phil who’s screened his bizarro homemade movie Pink Christmas to the locals at Christmastime for the past 20 years.  I had to meet Phil.

HF: Did you ever make narrative films or have you always been drawn to documentaries?
SM: Love documentaries, the possibilities are as endless as narrative but you get away with more on a low budget.

HF: Were you satisfied during the process of filming or was it at all a guessing game?
SM: Being in Arkansas, living in my own little apartment in town, and meeting up with Phil every day to be taken around was my favorite part of the entire process! Technically I was fully prepared, but the film was almost entirely derived from what I was experiencing, seeing, reading, and encountering while out there.

HF: Did you make the whole film yourself or was a crew there with you?
SM: Myself until the post production stage when my sound genius Stan and others took over.

HF: How might you define the relationship between the documentary filmmaker and his subject?
SM: It helps being an outsider as odd things no longer noticed in the subject’s world stick right out to the filmmaker, and the coming together of two worlds and viewpoints creates this entirely new and fascinating document all its own- that neither subject nor filmmaker could have done individually.

HF: Who supported you through this film (emotionally, of course)?
SM: I was in depths of depression and despair when I was back home editing this thing, friends and fam and the desire to finish it helped loads. Also why the doc ended up being quite dark.

HF: What work had you done before Glass Eyes?
SM: King Dong.  My first labour-of-love documentary about Moron Movies impresario Len Cella.  Made with a nothing-special home camcorder and awful sound recording but I love it.  It’s online please watch!

HF: Where were you when you found out you got into Slamdance?
SM: At my mind numbing day job.  Thanks for the cheer-up.

HF: What was your favorite memory of Slamdance?
SM: It was all great but- A nice lady coming up after my screening to have a really long, meaningful, and insightful conversation about my film, the subject, and filming in Arkansas.  Her late husband Jake Eberts is Canadian like me and produced Chariots of Fire and Gandhi in the UK, where I live. Nice random connection.

HF: What has Slamdance done for your film and your career?
SM: For the first time I’m approached by festivals out of the blue, am taken a modicum more seriously by funding bodies and fellow filmmakers, and have tapped into a magically supportive network of friendly freaks who ‘get me’.

HF: What projects have you been working on since?
SM: Working on my next documentary about 1981’s nightmare and insanity inducing video game Polybius.

HF: When did you know you wanted to be a filmmaker?
SM: When I was 9 after creating my Pizza Hut ‘Personal Pan Pizza’ spoof advert ‘Personal Canned Pizza’ with friends on a crusty old VHS camcorder.  We made the props, wrote a song, edited it, and then laughed our heads off for weeks.

HF Do you work better alone or in a group of artists?
SM: I live in my head and love plotting and formulating up there but definitely rely on and looove working with and trusting the input of others.  Except for editing-  me only, ever.

HF: Who are your inspirations?
SM: Groucho+Harpo Marx, Werner Herzog, Chris Marker, SCTV, and all my arty-farty friends.

HF: What movie(s) did you watch most as a kid (if any)?
SM: Marx Brothers, Woody Allen, Twilight Zone, and trippy children’s sci-fi like Tron, D.A.R.Y.L., and the Cat from Outer Space.

HF: Best paper you wrote in school?
SM: Loved essay writing in University.  Best papers I did were on Karl Marx’s Das Kapital, Screwball comedies, Stan Brakhage, and Soren Kierkegaard’s Fear and Trembling.  Making a doc is basically just writing an essay with the addition of image and sound, so there ya go.

HF: And finally do you go to the movies often but more importantly do you buy popcorn at the movies?
SM: I do! Last thing I saw was the full unsplit 5+ hour version of VonTrier’s Nymphomaniac.  I ALWAYS buy popcorn. In the UK where I live they offer both salty/buttery AND sweet popcorn but the bestest is the sweet and savory mixed together option.  Mind bending.

These two Award Winning Slamdance Films will be playing tonight at 7PM at the Downtown Independent in Los Angeles, along with a line-up of 14 other fantastic shorts. Get your tickets here ($12 General/$6 Student) and if you don’t live in LA, be sure to check out the rest of the On the Road Tour, coming to a city near you!