Posted On December 29, 2015 By Cat Hausler In Buzzworthy, Music, Shows, The Scene

As another year comes to a close, another set of New Year’s Eve plans come into consideration. This year, Colorado’s biggest New Year’s party can once again be found at the Colorado Convention Center in downtown Denver. Celebrating its fifth anniversary, Global Dance’s Decadence will take place on December 30th and 31st and will host its biggest lineup to date. To purchase tickets, click here.

I might sound like a broken record, but I mean it when I say that the Decadence lineup this year is the best in history. Global Dance has booked a ton of big name DJs that vary in genre and could be seen on any top festival lineup. There are WAY too many good artists to talk about in one post, but below are the ones you absolutely cannot miss.

Jack Ü – Made up of superstar DJs Skrillex and Diplo, Jack Ü has attained nothing but success since bursting onto the dance music scene in 2013. The duo’s EP entitled “Jack Ü,” became an instant hit and their single “Where Are You Now” with Justin Bieber turned out to be one of the top songs of the year. Known for their crazy live sets that exude massive amounts of energy and boast a number of genres, Jack Ü is certainly not to be missed.

Track to Check out: Febreze

Galantis – Another dance music twosome, Galantis has also made waves in EDM in recent years. Debuting their live show at Coachella 2014, Galantis hit the ground running and has not slowed up since. Though Galantis is a relatively new project, the Swedish-born group is made up of veteran producers. One half of Galantis is Christian Karlsson (the brains behind Britney Spear’s hit “Toxic” and one third of Miike Snow) and the other half is Linus Elkow (co-writer and producer of Icona Pop’s smash, “I Love it”) who have both made names for themselves independently. 2015 was a huge year for Galantis as they released their first album, Pharmacy, which drew much acclaim and scored the coveted final sunrise set at the mainstage of Electric Daisy Carnival (EDC), Las Vegas. I was at that EDC set and it was nothing less than magical.

Track to Check out: Runaway (U&I)

Odesza – For those critics of EDM out there, Odesza is a prime example of a dance music group who breaks molds and challenges norms in the genre. The young duo combines live instruments with synthesized beats and unique vocals to make a sound all their own. An Odesza set takes the audience on a musical journey through a wide variety of genres, rhythms and emotions. It’s really just a “you have to see them to get it” thing.

Track to Check out: Say My Name feat. Zyra

Hardwell – Recognized as one of the current rulers of EDM, Robbert van de Corput, better known as Hardwell, is at the top of his game. Known for his high energy sets and music, the Dutch producer has played every major festival in the world and continues to put out hit after hit. If you’re looking for a mellower set, this is certainly not the one to head to, but if you’re wanting a big room, dance til you drop show laced with all of your favorite dance music tracks, be sure to give Hardwell a try.

Track to Check out: Follow Me feat. Jason Derulo

Deadmau5 – Say what you will about his antics and attitude, Deadmau5 is a dance music legend. There’s really not much else to it. You definitely need to see this guy at least once in your lifetime.

Honorable Mentions: The whole rest of the lineup is stellar, but be sure to catch at least part of Tommy Trash, What So Not, Bassnectar and Gramatik on night one and Jai Wolf, Gareth Emery, Big Gigantic and Excision on night two. See official set times below. 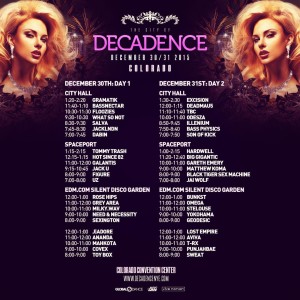