Posted On June 4, 2014 By Anthony Kozlowski In Music, Shows

Nowadays, it’s not a matter of whether or not you’ll pony up $400 to attend your local 3-day music festival, but rather which one you’ll go to. We’ve all heard of Coachella and Lollapalooza, but those behemoths have birthed a whole sea of imitators across the nation.  From Firefly and Governor’s Ball on the East Coast to Outside Lands, Bottle Rock and Sasquatch on the Pacific and all the Bonnaroos, EDCs and Austin City Limits in between, it now seems impossible to drive a hundred miles without an expensive, overstuffed showcase of artists popping up.  These festivals have become so lucrative that some run for 2 consecutive weekends and you can even buy tickets a year in advance (and 8 months before you know if the lineup is worth it) and choose a payment plan to make that blow to your bank account not hurt so much.  Our concert-going experiences are now closer to buying a car than they’ve ever been.

That’s fine and dandy for everyone who thinks the handful of bands they recognize in the 150+ artist lineup is worth a handful of Benjamins and the most crowded campout of their lives.  For everyone else, there is an alternative.  Once upon a time, radio stations kicked off the summer in style, rounding up every artist they’ve spun over the past six months and throwing an all-day event that promised a freeing diversion from the daily grind that won’t make your wallet ache in the morning.

Over the weekend, I got a chance to attend BFD, a glorious example one of these festivals.  Don’t ask me what it stands for – I’ve only been able to decipher the first two letters in the seven years I’ve known about it.  Thrown by Live 105, the San Francisco Bay Area’s Alternative music station, BFD celebrated its 20th anniversary on Sunday.  And they did so with record numbers.  As we were reminded again and again by Miles the DJ (MC of the afternoon), Mountain View’s Shoreline Amphitheater had sold out for the occasion. 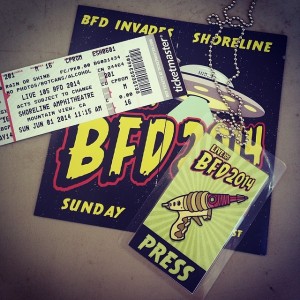 And they still managed to squeeze me in somehow.

With the killer lineup they managed to wrangle, it isn’t difficult to see why.  Headlined by indie pop superstars Foster the People, the roster included acts spanning the alternative, electronic, and hip-hop spectrums.  The Main Stage brought together an amalgam of sounds from pop punk breakouts New Politics, to chillwave duo Phantogram, throwback soul buzz group Fitz & the Tantrums, and the always eclectic rapper MIA.  And that’s just for starters.  The Subsonic Tent delivered a constant boom of EDM artists and DJs from the opening of the gates to late in the evening, while a slew of alt-rock come-ups ruled the parking lot Festival Stage and Bay Area artists took up residence on the Local Stage.

Unlike the larger festivals, the relatively small roster (36 artists in total) and number of stages allowed for little overlap.  The Main Stage only opened once festivities in the parking lot died down and while the party in the Subsonic Tent went all day, chances are that dancers out there wouldn’t be sorry to miss Fitz & the Tantrums.

And for the reasonable sum of $50 (that includes service fees), the ticket price underscored even that of the 1-day passes for larger festivals (assuming they still sell such things).  The food and drink were a little on the pricier side, but I have yet to find a venue that offers cheap bites.  At least the selection of stands and Bay Area food trucks gave plenty of options for your $18 dinner.  If you snuck in a flask of whiskey, you were golden. 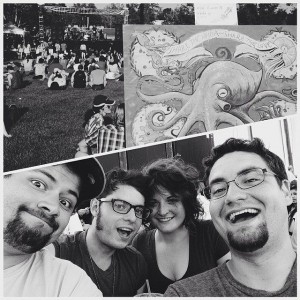 That’s probably why we look so happy.

Armed with my Writtalin press pass, I was able to peruse BFD at no cost to myself (hugs and kisses, Ascher!) and the experience surpassed many of the larger festivals I’ve attended.  Most of the artists put on amazing shows despite the blistering heat and truncated set times, but if I were to narrow down the line-up to a handful of must-sees, they would be the following:

If you’ve flipped on the radio at all in the past six months, you’ve probably heard the swampy, accordion-laden stomper “Come With Me Now” by these South African brothers.  But their performance Sunday afternoon proved that they’ve got more going for them than just that hit.  Backed by a thudding tribal rhythm, they powered through a grooving setlist that included an eclectic mash-up of Beatles favorite “Come Together” with Dr. Dre’s “Nuthin But a G Thang” and while you’re probably scratching your head at that, it was pretty damn good.  It’s safe to say that nothing on in the sphere of popular music sounds quite like KONGOS (or remotely like them for that matter), but through some freak chain of events, they’ve arrived.  And they’re the biggest and best argument for accordion music since Weird Al learned to polka.  They capped off the set with their crowd pleasing hit, but I for one left craving more and hoping that they don’t enter the pantheon of one-hit wonders.  For that to happen to such an original group would be a tragic disservice. I spent a large portion of my day dancing it up in the Subsonic Tent, but unlike my former college roommates, I’m not as discerning when it comes to EDM.  I just hear four chords and a drop and that’s good enough for me.  With that in mind, this Brookyln duo really kicked it up a notch, marrying danceable beats with a throwback disco sensibility.  They may not be as instantly recognizable as discohouse contemporaries Ducky Sauce, but the lack of a name-brand worked in favor of the Knocks.  My girlfriend and I managed to push our way to the front of a thinly-packed yet fired-up crowd and though we weren’t rolling on a cocktail of Molly, LSD or the like, it was still a hot, sweaty good time.

Most remix artists come equipped with a MacBook, a pair of Beats and a library of torrented music. André Allen Anjos of the RAC must have seen that formula and flipped the bird at it.  He employs a full band that specializes in live remixes of indie favorites as well as slew of original recordings.  Their BFD performance featured a combination of the two, whipping the crowd into a mass that bopped along to each sugary cut.  Highlights included fresh re-imaginings of Joywave, Edward Sharpe, and The Temper Trap and while their original pieces were just as upbeat, it was these pieces that really got the crowd moving. I recommend these guys highly to fans of dance music who think musicianship is also important.  I just happen to count myself among that number.

No one at BFD took the stage with the same energy and fervor as Ohio quartet Walk the Moon.  After their introduction as Festival Stage headliners, they bounded out – faces painted and grinning widely – to deliver a positive dose of their signature electropop.  Though they don’t carry the weight of contemporaries Imagine Dragons or the Neighbourhood, they love performing and enjoy the music they make ten times more than those heftier acts.  Their fans dappled their faces in solidarity and bounced along to even the more obscure cuts from their debut album, riding off a rising energy throughout the entirety of their 40-minute set.  They capped it all off with their alternative smash hit “Anna Sun,” a love song to forgotten youth that would drip with nostalgia if not for the glowing synths and guitar that buoy the whole thing.  I left the Festival Stage with a light heart and a smile spread across my face, which was a perfect preparation for my #5.

For all those surprised that Danish pop punk group New Politics got on the map this year, none are more dumfounded than the band themselves.  Their performances and Facebook page are a crash course in humility.  Right before their broke into their multi-format hit “Harlem,” lead singer David Boyd remarked that they opened the Festival Stage in the parking lot a mere year ago, but now they’ve made the jump to the amphitheater.  He described the transition as “amazing” and “humbling.”  Between rickshaw fast punk tracks and bouts of breakdancing, he added that their quick journey has made a few things clear to him.  “I think I finally understand this whole life thing,” he said.  “It’s about what we have right here.  Good music, friends and unity.”  All three were plentiful at this year’s BFD, and I didn’t have to sacrifice my weekend, my wallet or my sanity to get them.


Be sure to check out my BFD picks and more as they continue to tour this summer.