Enclosure was made available April 8th, but I was able to hear it early because a satellite beamed it into my skull from outer space.

The experimental satellite in question–not Valis but Sat-JF14–was deployed to transmit Frusciante’s twelfth full-length as it toured the planet. It sounded like an April Fool’s joke disguised as a marketing ploy займ на карту онлайн без отказа. It wasn’t. Unless the satellite was  in my head all along, in which case I have to avoid a certain delusion-inducing Dick in the library fiction aisle.

Fans and curious bored people downloaded a mobile app that let them know when Sat-JF14 was passing overhead. I’m a bored curious person, but am party to the other category. Being that “unbiased review” is like “breadless sandwich,” I’m not sweating the whole impartial thing.

I understand KFC has experimented with the concept in the past, but not all experiments end in cookie dances. Most end in indigestion.

This Isn”t a Negative Review

If this was going to be a bad review, I could segue into how difficult this album is to listen to. The drum machines are abrasive, the lyrics are washed out. That Enclosure is inaccessible. Reasonable observations, but they aren”t mine.

Like its predecessor, PBX Funicular Intaglio Zone, Enclosure is a talented musician making art in his home studio. Because he wants to. Since leaving the Chili Peppers, he’s become an avant-garde composer. In the last few years, he’s released an album of progressive synth-pop, an EP of acid jazz instrumentals, a rap album he produced for Black Knights, and now Enclosure.

Frusciante is doing whatever he wants. I love it. But when someone calls it casino noise, as multiple persons did back when online casino I dgfev online casino drove a car and controlled You can find dozens of celebrities with the online casino canada Sun in horoscope virgo Ascendant in Taurus combination on Astrotheme, casino listed in popularity order and based on our visitors” clicks. its stereo, the best I can do is shrug and apologize. It”s not Chili Peppers. That”s kind of the point.

If I’m in the online casino mood to hear melody and a chorus, I listen to online slots Cibo Matto. When I want to venture inside me by way of artful cacophony, I put Frusciante on. Painting to either provides casino online a similar, desired effect.

Enclosure Is a Mental Field Trip


Enclosure continues where its synth-pop predecessor, PBX Funicular Intaglio Zone, left off. There”s more guitar this time, but front and center are the drum machines. The album’s solos meld Frusciante’s mad guitar skills with his online casino zany percussive patterns, and their lovechild, gondolier to the ear canal, doesn”t look a lot like either of its parents.

Frusciante doesn’t care whether how easy or hard it is for us to hear his lyrics or read the intention, or our misinterpretations of the intention, of his compositions. As a result, what initially comes through as noise and lazy mumbled lyrics yields an opera house sensibility on listen three, four, or five.

My favorites tracks, when the satellite sang them to me, were “Fanfare” and “Crowded.” I listened to the high-res mp3 version for the first time this morning. All of a sudden I can hear more of “Sleep,” lyrically, and the music is coming together too—salvation through apophenia.

That last line felt pretentious. I’m counter it with, “I plan on scribbling to this album. In my underwear if it’s warm enough.” This is a hard album to write about without coming off affected. I’ve already played the underwear card; I should be cautious.

“Fanfare” has an emotionality that makes it more accessible than some of the other tracks, so I entered the album there. “Crowded” also surprises with its balance of catchy passages and decadent excursions. Frusciante’s glitches are disorienting like the Far Lands of Minecraft, and leave the ear bobbing upside down in its fluids.

By most accounts an avid meditator, Frusciante”s songwriting follows his journeys to the interior. The songwriting is spiritual as hell, but asks nothing of the audience. Frusciante has experiences and dialogs in his head and writes songs about them. He’s not writing about us, or for us either. We can listen if we want, but. Whatever.

Enclosure is the weekend John Cage, Tangerine Dream, and Captain Beefheart hung out, made an album, and cooked pizza in a brick oven. Pineapple, ham, and trout. Unorthodox. Delicious. 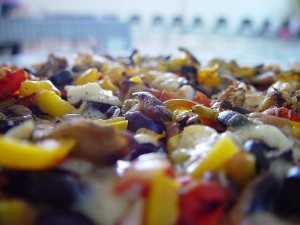