Posted On February 19, 2016 By Jackie Rodriguez In Buzzworthy, Music, Music Musings, The Scene

Upside Down & Inside Out

You’ve probably seen them on treadmills. Maybe you haven’t, but you’ve seen them dancing in a backyard. It’s probably the treadmills, though, since that’s what the Chicago-based band, OK Go, is known for– their catchy music and incredible videos and stunts that accompany them in a long, single take– starting with their backyard dance to their song A Million Ways, the video that catapulted them from sophomore artists to the band with the most downloaded music video ever, and continuing with their viral video for Here It Goes Again. That particular single had the treadmill routine that spawned hundreds of remakes and parodies– but that’s all old news. OK Go just released their new music video, and they’re determined to somehow beat themselves in an epic journey for the best video. 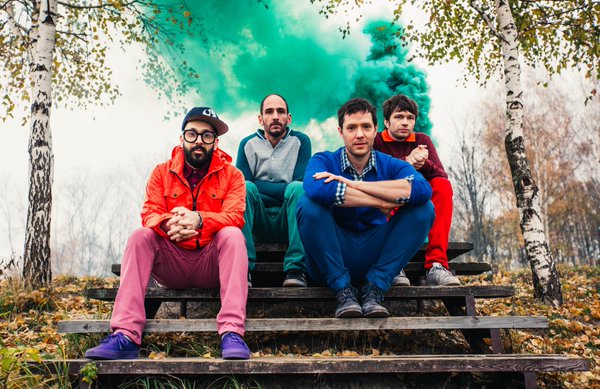 Upside Down & Inside Out, from their fourth studio album, perfectly encapsulates the band’s ongoing mission, literally taking themselves upside down and inside out, using parabolic flights to create a single take video shot entirely in zero gravity. An unnecessarily involved process: it required special medical permission, and twenty one flights of practice and filming. This sort of dedication is exactly why that video has already been viewed over 46 million times– not including the shares and retweets across other platforms– because it’s so obvious that this is what they love to do, this is what they were meant to do.

Their lead singer recently held a live video chat on Facebook discussing the ins and outs of making the video, going into detail on creating the choreography that would work in zero gravity, and how exactly they put 21 seconds of song chunks into 27 seconds of weightlessness. The secret turned out to be slowing the song down by a percentage so precise you just know someone had to be there with a calculator and a paper of scratch work to figure it out. From there, the band would perform the routine at the slowed speed, only ramping it back up when filming was finished. Despite the short notice, the video chat was a huge hit, garnering over 3500 viewers, and lasting over an hour.

It’s this particular brand of determination– from the heaviest of anti-nausea meds to the amount of preparation needed to even begin a video of this magnitude– that makes OK Go so unique. Seventeen years after formation, they’re showing no signs of slowing down, and the fans don’t want them to, many clamoring during the live chat for an underwater video to follow this one up. Hopefully the band will take the comments to heart, but somehow I just know they’ll manage to do something even more unexpected whatever they decide to do next.

Jackie is a college student trying to get rid of the french fry smell on her clothes and write stories that make people feel the things she's always felt. She hopes to become famous enough so her friend can eat the fancy bread they always have at award dinners. You can follow her daily life on Twitter @atragicthrill.