Posted On November 3, 2015 By Cat Hausler In Artist Interviews, Music

The green room at the Bluebird Theater in Denver is not so much a room as it is a little nook under the stairs that lead down from the stage. There’s a small couch wedged directly under the stairs and a few chairs, but little room to move when you add in two DJ groups, their crew and tour manager. So when I sit down on the edge of the couch to speak with Cash Cash’s JP Mahklouf and Sam Frisch, I’m maybe, at most, four feet from either of them. A fan of Cash Cash since hearing their song “Take Me Home” feat. Bebe Rexha, which sent them to insta-EDM stardom, I am beyond pumped to get a chance to speak with JP and Sam before their Denver performance.

The members of Cash Cash (Mahklouf, Frisch and Mahklouf’s brother Alexander) have been making music together since the early 2000s. Many fans may not know, but their sound was totally different back then – they used to tour with the likes of Boys Like Girls, We The Kings and Cobra Starship before settling into a dancey-er scene. But by the late 2000s, Cash Cash hit its stride, when “Take Me Home” feat. Bebe Rexha became a fan favorite and staple in many big-name EDM producer’s sets. From that release on, things have only gone up for the DJ group. With support from the likes of Tiesto, Hardwell and Zedd, Cash Cash has put out dance hit after dance hit and played to sold out crowds across the globe.

Cash Cash, touring with fellow dance music artists and friends Tritonal, has played a show almost every night for the last month, so I’m worried I’ll be met by a less-than-enthusiastic pair. But, I couldn’t have been more wrong. JP and Sam jump into conversation eagerly, offering up stories from the tour thus far and speaking passionately about their music. 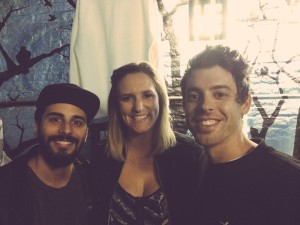 Cat sat down with JP (left) and Sam (right) of Cash Cash on October 24th.

Cat: You guys had a really different sound when you started making music in the early 2000s. Talk to me about how you came together and evolved from early Cash Cash to where you are now.

JP: Sam and I started producing really early. We were kind of just messing around, trying to find our sound. Then we started doing some remixes for other artists and that kind of effected our original music and brought us to where we are today. Working with other features also helped us to expand our horizons to different styles and genres. And we’ve been lucky to work with some really good artists.

Cat: I know a little bit of the story behind the name, but can you tell me about how the name Cash Cash came about?

JP: It’s really simple. Sam and I were a part of different bands growing up and we never trademarked the names. And the group we formed together got sued by this rapper and so eventually we had to come up with a new name, but we couldn’t agree on a name. So I was like, “Let’s just name this group Cash Cash because everyone is after all of our cash and we don’t even have any yet.” *we all laugh* And that was it. Bam!

Cat: You guys play a pretty wide variety of music in your sets. How would you describe your personal sound?

JP: That’s a good question… Well, we do a lot of different styles and tempos but everything we do is pretty melodic and thought out. It’s not that rambunctious.

Sam: Yeah, we try to keep it really musical based, pretty melodic.

JP: That’s what comes naturally to us. We when try to do other stuff, we fail. *he laughs*

Sam: That’s the great thing about playing live- we get to play the crazy stuff. But personally, we’re inclined to do more melodic stuff. But we’re always trying to change, trying to grow as producers. All of our music is going to be based around good song writing and good melodies.

Cat: A lot of people know you for a pretty fun, melodic, uplifting sound. I.e. “Take Me Home” and “Surrender.” But your latest single, “Devil” feat. B.o.B., Busta Rhymes and Neon Hitch, has a totally different flavor. Tell me the story about how that song came about. What was it like working with B.o.B and Busta?

Sam: Yeah, “Devil” is a little darker sound than what we usually do. But it all came together. We met up with Neon Hitch and got in the studio together. Basically, we wrote the song from scratch and we wanted to try some new stuff. We wrote the big hook, the piano chords and the vocals all together. Then we built the rest of the track around that.

JP: It was really good working with Busta and B.O.B. They’re really talented rappers and we look up to them.

Sam: We’ve been listening to both of them for years, they’re some of our favorite rappers. It was amazing to work with them!

Cat: I want to go back in time a little bit and talk about “Surrender.” That song came out when I was going through a hard time in my life and really resonated with me. You guys wrote a little blurb about it on your SoundCloud talking about how it’s meant to be a song of empowerment. Tell me more about that.

JP: You know, sometimes surrendering is a good thing – When you surrender yourself to someone that loves you or that you love and you’re not sure if you love them… Or sometimes you’re fighting for something and you don’t know what you’re fighting for and eventually when you let go, you’re finally set free. It’s not keeping you up at night, it’s not wearing at you.

So it’s just an interesting way to look at the word “surrender.” Because it’s usually so negative, like you’re giving up or not fighting hard enough. But sometimes, when you surrender, you can focus on other things.

We heard the singer, Julia, on another song that we thought was awesome. So we hit her team up and just hit it off really well with her. Same thing kinda like with Bebe [Rexha, who does the vocals for “Take Me Home”].

Sam: Yeah, we just got in the studio and finished the record.

Cat: You played Ultra in Miami for the first time this year. What was that experience like?

JP: Ultra was awesome! It’s overwhelming, but it sums up the whole year. It kind of brings everyone together, brings all the producers together. And we can just kind of talk about the year, meet up with old friends, laugh, all that.

Cat: Had you been to Ultra before as fans?

Sam: We’ve been going to WMC [Winter Music Conference in Miami, Fl.] week the last three years I think. One year we were there just doing artist on artist interviews with Hardwell and some other people.

JP: That was cool because it’s different when an artist interviews another artist. So we got some really good questions out of that. It was a great piece.

Sam: Yeah, it was cool. And we were at Ultra for Swedish House Mafia’s last performance. So that was awesome!

Cat: You’ve been on this “Untouchable” tour with Tritonal for a while now – it’s been all of you on a bus in a different city every night… Tell me all the dirty details. What’s it like touring with some of your closest friends?

JP: I’ll tell you what – we got a bottle of Jameson and we finished it within the first night. In one hour, that thing was finished. Then, an hour later, we smashed the bottle. *he laughs* It was pretty intense, but a good way to start the tour!

Sam: It’s been fun, but it’s been interesting. We’ve gone through some good times, some weird times. We had some ants on the bus. Chad [from Tritonal] thought that lemon juice was the move. But that actually attracted them.

JP: Chad’s holistic approach didn’t work, but my Raid seemed to kill them all. *laughter*

Sam: It’s been a lot of fun though! It’s a lot of late nights up after the shows, hanging out on the bus. Our sleep schedules are crazy now. But it’s fun!

Now, we’re at the end of a weird little sickness that has been going through the bus. The crew kind of got wiped out a little bit the last few days.

Cat: “Untouchable,” the song that the tour is named after, is a joint effort by you guys and Tritonal. What was the process in making that song?

JP: They did a remix for us of our song, “Surrender” and we thought that was so good that we knew we had to do something together. We have similar sounds, very melodic, very in the same vein. So we played a couple shows together, hit it off really well and then made it happen.

Sam: It was super collaborative. We were emailing back and forth for like four months working on the record.

JP: Then after the song came out, it did so well, we were like, “hey, let’s just go tour together.” It made sense.

Cat: 2015 has been a busy year for you guys with touring and new releases and all that. What do the next few months hold in store?

JP: We’re finishing up an album. It’s really close. We’re just fine-tuning and hopefully, a few months from now, it will be released.

Sam: You’ll be hearing a lot of new music from us. We have some really cool features, some cool collaborations coming up.

Cash Cash’s set was fire from start to finish. JP and Sam effortlessly mixed their music with songs of a variety of genres while keeping the crowd engaged. If the “Untouchable” tour is coming to a city near you, be sure to get to it!