Posted On November 6, 2015 By Cat Hausler In Artist Interviews, Music

JP and Sam of Cash Cash stand up and immediately Dave of Tritonal sits down. Let me refresh your memory- I’m in the “green room” (nook under the stairs) of the Bluebird Theater in Denver just before seeing Tritonal and Cash Cash play back to back on the Colorado leg of their “Untouchable” tour. Having finished up chatting with Cash Cash, it’s time for me to talk to Tritonal. It’s my first attempt at consecutive interviews and I’m hoping I can keep my composure as well as my questions interesting.

Made up of Chad Cisneros and Dave Reed, Tritonal has seen a meteoric rise to EDM fame in the last few years. Known not only for their original tracks, but also for their high energy live shows, Chad and Dave have become fixtures in the current dance music scene. With a hit radio show, Tritonia, multiple new releases and having played some of the biggest festivals and venues in the world over the last year, Tritonal has hit its stride and does not appear to be slowing down.

Much like JP and Sam of Cash Cash, Dave shows no visible signs of exhaustion, despite the grueling tour schedule he and Chad have been on. In fact, Dave is enthusiastic about answering my questions, giving me plenty of detail about the tour, their radio show and the music Tritonal is/has been working on. 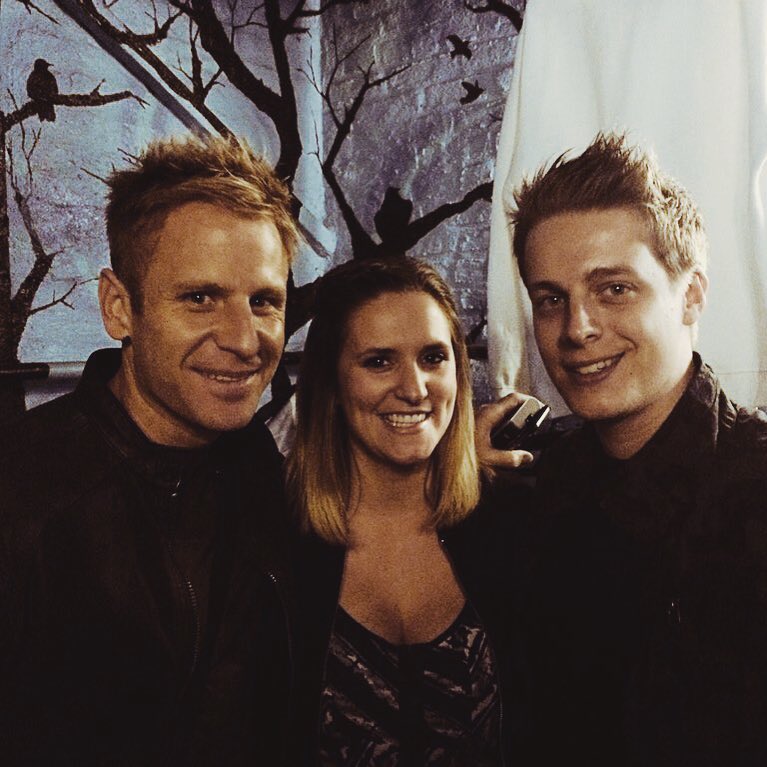 Cat sat down with Tritonal’s Chad (left) and Dave (right) on October 24th.

Cat: You guys are from Austin, TX, a place that I’m sure many would not associate with EDM. Tell me how you came together and started making music.

Dave: We came together over an online forum. Chad and I had the exact same synthesizer and it had all kinds of bugs and glitches. Funny enough, we met in the days of MySpace. But we didn’t really share music until that synthesizer had its issues. We were trading each other songs, showing each other sounds and we were like, “what do we do to fix this?” Kinda long story short, we met on an online forum.

But us working together didn’t really blossom until a year after that. We love the same kind of music, we’re into the same kind of beats and it kicked off from there. We like to joke a lot about meeting on an online dating site. *he laughs* I’m originally from Washington, DC and I moved to Austin to continue my college education as well as to meet up with Chad and be closer to family. And I’m so happy it all worked out the way it did.

Cat: Where did the name Tritonal come from?

Dave: That came from two weeks of thinking of what exactly we represented. It was like, “Who are we? Who’s Chad? Who’s Dave? Who are we musically?” We’d gone through so many bad names. And I think once we hit it, we were like, “that’s it, that’s the one.” We came upon “Tritonal” and we looked it up and realized that “Tritonal” was not only an explosive, but it was also an augmented fourth or diminished fifth. So it’s like music explosivity, Chad’s personality, my personality, it just all works together. That name really hit home for the both of us. Mind you, it wasn’t anything that happened overnight, it was a long process.

Cat: Where do you pull your inspiration from? Are there any particular artists who have really shaped your sound?

Dave: Chad loves Sasha and John Digweed and I love Pink Floyd and those kinds of sounds. Our tastes are really all over the map, to be honest. Coming up with Armin [van Buuren] and listening to the likes of the other dance artists that were out there, we have a lot of different tastes. One big one that was common between Chad and I was Above and Beyond. We love the classiness that the guys give off. Above and Beyond is huge for us.

Cat: Playing as a group must be really different than DJing solo. What do you guys like about DJing together?

Dave: That’s a great question. And you know what? I actually prefer playing together. We’ve had to play solo on occasion once or twice basically because of passport problems or something like that, but we’re not in favor of doing that. Really, that’s not who Tritonal is. We balance off each other’s personalities. I’m a little more reserved, Chad’s a bit more outgoing in terms of stage presence. It’s just a good dynamic. And that’s what I feel is so important for a duo. If you have a bad dynamic, your duo won’t last. That’s something Chad and I learned we could use. We got each other’s musical tastes out of the way, we learned a middle ground where our musical tastes lie and we agree to disagree. We’ll have our arguments and our disagreements, but we know, no matter what, we’re always going to come to the middle of the road on something. I think that’s really great for a duo.

Cat: Tritonia, your radio show, has become a big part of who you guys are as artists. What’s the goal of that show? How do you keep it from getting stagnant episode after episode?

Dave: I think it’s natural for any radio show to have a kind of stagnant period, but with ours, we’re really excited to say that we’ve had a lot of hype around it. And I think that’s because of the growth we’ve had in the show. Not only that, but we use it as a filter for what we actually play live. So we’re showing fans things that we think are cool. And not only that, but we’re telling them what we’re doing. We even have a hotline that they can call in and give us or their family and friends a shoutout. We just love interacting with our fans and our radio show is a big part of that. To have a big listener base now, we can’t be thankful enough. Tritonia is a big deal for us.

Cat: You recently released “Until You Were Gone” with another major dance music duo, The Chainsmokers. I LOVE the song and it’s already getting a lot of attention. Tell me the story of how it came about.

Dave: We met The Chainsmokers and they were super cool. Then they reached out to us and the vocal that they shot over, we just fell in love with it. We thought it was so cool. The guys were super cool, the chemistry between us matched, the dynamic between all of us was awesome. So we just went for it and we developed a great friendship through it.

Cat: You guys have already done some really cool collaborations but is there any artist/group/producer that you’re dying to work with?

Cat: You’ve been on the Untouchable tour for a while now. How do you keep things fresh night after night? What’s it like touring with some of your closest friends in the business?

Dave: With collaborations in the EDM scene, because it’s so digitized where you can meet each other online and you can get the job done online, you don’t often see a lot of each other face to face. So to get on the bus and actually be able to meet everyone, it’s kind of like going to school. It’s like, “Hey, how are you? Nice to see your face, nice to actually see you in person.” *laughter* We have a really good, healthy dynamic on the bus between all of us. The guys in Cash Cash are amazing guys, super funny and they keep the energy consistent. And not only that, we also have a great crew.

I feel like we’ve learned a lot. We’ve learned how to deal with each other’s needs on the bus. For example, the bus shower didn’t work at one point, so we had to figure that out. It’s all just balance. It’s a new experience for me and Chad, getting on a bus. It’s our first major bus tour.

Cat: What can you tell me about the set you’ll play tonight?

Dave: The set tonight is obviously going to have “Until You Were Gone,” gotta have it. We have a couple singles that we’re working on too. Some of which we’re deciding if they’re going to be on our album or not. One of them, we’d love to end the set with. We always like to switch it up from set to set to see what we like to play and we like to floor test some material that we’re still working on. There’s gonna be some exclusive material tonight, there’s gonna be some energetic fun stuff, you know we love to jump around.

Cat: You guys seem to have a really strong bond with your fans who you call Tritonians. Talk to me about that relationship.

Dave: Our Tritonians are everything to us. It’s just a passionate group of people and wonderfully humble human beings that we’ve met. Some of them have been amazing, some of them have tattoos on them, it’s great! Having a fan base like our Tritonians is just incredible.

Cat: 2015 has been a good year for you. What else can the world be looking forward to from you guys in the future?

Dave: Obviously, this tour is going to finish up. We’re looking into our artist album which is going to be a big deal for us. We’re not sure when or what time it’s gonna come out, no dates, we haven’t discussed anything, but that’s a big thing for us. We’re going to have a big 2016, I can tell you that!

Tritonal’s set was pure energy the whole way through. Dave and Chad thoroughly displayed the “good dynamic” that Dave spoke to me about as they played music, jumped around the stage and interacted with the crowd. There is no doubt in my mind that these guys love what they do and it was a pleasure finally getting to see them live.

Check out my vote for best dance track out there right now, Tritonal’s collaboration with The Chainsmokers, “Until You Were Gone” feat. Emily Warren: