Posted On April 4, 2017 By Cat Hausler In Artist Interviews, Music

Writtalin Artist Insider: A Chat with Indie Electronic Group A R I Z O N A

It’s the middle of winter in Colorado, but you’d never know it with the 60 degree weather in Denver tonight. I’m at Larimer Lounge, an intimate venue in the River North neighborhood, that I’ve walked by a million times but have never been to before. Larimer Lounge is close to full already, even though it’s still before 8 PM. To be honest, I’m not even sure who the headliner is – my friends and I are here to see the opener – A R I Z O N A.

With a song called “Cross My Mind” that (due mostly to heavy Spotify play) helped to put the band on the map, A R I Z O N A has gone from unknown to new group you need to know within the last year. Personally, I’ve been hooked since hearing “Cross My Mind” for the first time and am thrilled to get to see A R I Z O N A up close and personal.

Admittedly, I’m a little apprehensive – it’s always a gamble going to see a group live for the first time and I hope that A R I Z O N A  is as good in person as their recordings. From the first chord, I know I’m in for something special. The set is light and upbeat, but filled with emotion and honest, raw talent. The members of A R I Z O N A have clear musical chemistry and a positive energy. The sound is clear and vibrant and there’s something about seeing the group live that adds another dimension, an edge that I wasn’t necessarily expecting. Despite the fairly short length of the set, I love every moment and dance enthusiastically with my friends to the unique and lively sounds of a group who is arguably THE up and coming act of 2017.

I’m not expecting an interview, but I catch some luck – the band members are standing outside as I’m exiting Larimer Lounge. I chat briefly with A R I Z O N A’s manager before sitting down with Nate Esquite (guitar), David Labugen (keyboard) and Zach Hannah (lead vocals) for a quick but enthusiastic chat about the band’s sound, the current tour and what is coming next. 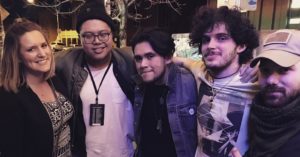 Cat: How did you guys feel playing at the Larimer Lounge tonight?

Nate: It was awesome!


David: Yeah, this was our first time in Denver, so we didn’t really know what to expect. But we showed up to a room of people who knew all of our songs and were singing along. It just felt awesome to be here tonight.

Cat: You are doing a pretty extensive tour right now – what does it look like?

Cat: Nice. Are there any big shows coming up that you’re particularly looking forward to?

David: My parents are watching me for the first time in San Diego. LA is gonna be a big one. We’re excited about all the festivals as well.

Cat:  Is there any venue that you haven’t hit yet that you’re super stoked on?

Nate: I’m really stoked on the Troubador and Williamsburg Hall of Music – I’ve heard a lot of good things about that place.

Zach: You know, what’s also been surprising – some of the cities that are kind of a question mark, for guys like us from New Jersey, like Omaha, NE, places like that, we’re not really sure what’s there. But then we get there, we meet the people, we see a little bit of the city and play the show at the venue and we’re always so pleasantly surprised. We always walk away thinking, “that was awesome!” And it’s almost a shame we have to leave a few hours later.

David: The pseudo real answer – it just so happens that our music comes from a very dry place. It all goes back to the story – we named it A R I  Z O N A as a joke because we legit thought no one would care. We had quit our jobs. I’d saved up two months worth of money… But it kind of works out because we had no Twitter, we had no Facebook, we were so incognito, because we were like, ‘this is just for us.’ It panned out very differently, but it definitely came out of a place for us where we were just broken and we had to just drop everything and have a creative outlet for ourselves.

Cat: How would you guys describe your sound?

David: I think for us, the songwriting is pop. Zach and I grew up learning how to produce pop and write pop. But the sonics are kind of a mix of all of our favorite things. It ends up feeling kind of eclectic. But we say kind of indie electronic.

Cat: Who are some of your biggest influences?

David: Right now, for me, Phantogram is huge. They kind of do electronic pop in a totally different way which is so cool. I’ve been into this indie Swedish artist named Frida Sundemo for a while. I’m just really attracted to interesting voices so her and Chvrches and really iconic female voices…

Nate: For me it’s been a lot of like Sufjan Stevens, Jeff Buckley, St. Vincent and Ben Howard. Those guys always influence a lot of what I like to do on guitar.

Cat: To me, there’s a part in “Cross my Mind” that has a very Toto “Africa” sound – were you guys going for that?

David: Zach has a very strong affinity for that 80s vibe.

Nate: I think we all secretly super love that 80s synth vibe. So that’s definitely right on the money!

Cat: “Oceans Away” is really taking off right now – can you tell me that story behind that song?

Zach: The band is seemingly four guys on stage, but it’s seven, eight, nine, 10 guys in reality. We always have a team of dudes that we write and produce with and tour with. One of the guys, actually a guy we’ve learned a lot from, his name is PJ and he started writing that. He brought it to us one day, unfinished, and we loved it. So we finished the record – just kind of vibed one night back at our place in Jersey. We finished it, sat on it, called it a ‘slow jam’ for a long time, didn’t really expect it to be anything. We just wanted it to be an album record. Then by the time it got done, everybody received it really well. And we just kind of trusted that.

Cat: I’ve heard you guys talking about an album tonight – what’s the status of the album? What’s the sound?

David: We literally, a half hour before leaving for tour, submitted the last of the record.

Zach: It’s funny because Nate always says, “If you only know us from our first couple singles, the album will seem kind of eclectic.” It’s going to be kind of a surprise to hear some of the sounds on the record. Because it all comes from the same place in us, it’s copacetic. But, the sounds are different, we had a lot of fun on the album!

Cat: What else should the world know about A R  I Z O N A?

David: I think a lot of people don’t know that we’re pretty involved with our content, so we’re excited for the stories that we’re going to be telling with our YouTube channel. And I think we’re just excited to play our music live because I feel like, for a while we’ve been more of a studio act. We grew up in the studio. So to go out there and play it live is so different for us and I hope it’s something that’s refreshing and we bring something different for the fans to hear in person.

A R I Z O N A did not disappoint and I urge you all to see them ASAP! Check out the hit single Oceans Away: