Posted On August 3, 2015 By Cat Hausler In Artist Interviews, Music

Benny Benassi is a dance music pioneer. A key part of the electronic music scene since the 1980s, the Italian producer shows no signs of letting up as he continues to do massive world tours and put out hot new music.

Known best perhaps for his 2002 EDM anthem “Satisfaction,” Benassi has experienced all aspects of the dance music industry and has seen how it has grown and changed over the years. Today, having worked with pop superstars like Madonna and Chris Brown as well as having headlined almost every big name EDM festival in the world, Benassi is one of the most experienced producers out there.

In the middle of a world tour and with a recently released single, Benassi took some time to answer my questions after his day two set at Global Dance festival.

Cat:  It’s been a while since you performed in Colorado. What does it feel like to not only be playing in Colorado again, but also at one of the most iconic venues in the country?

Benny Benassi: It’s one of my favorite venues ever.

Cat:  You’ve been touring pretty extensively recently. Tell me about that.

Benny Benassi: The last tour was beautiful, I had my extended family with me and I have a crew of amazing people working with me.

Cat: You released a brand new single with Marc Benjamin feat. Christian Burns, “Who I Am,” on July 17, and the track is already getting tons of praise. How did the song come about?

Benny Benassi:  Marc sent me the idea. It was great. Alle [Benassi’s cousin] and I worked on it and sent it to our friend Jenson Vaughan who wrote the lyrics and melody. It was great that Christian Burns wanted to sing on it.

Cat: You played the Kinetic Field at Electric Daisy Carnival Las Vegas just a month ago. Tell me about that performance.

Benny Benassi: It’s always a thrill to play EDC. It’s one of the best festivals in the world really. Such an amazing energy.

Cat: Having been in the dance music scene for so long, how would you say it’s changed most? Where do you think it’s heading?

Benny Benassi:  It has changed in a lot of ways, from the way people consume music i.e. vinyls, CDs, mp3s or streaming to what they listen to – music comes in cycles. But I feel this evolution is only natural, it happens in everything. It’s definitely been a good change.

Cat: Your sound has evolved a lot since you initially got into dance music. How would you describe your current sound?

Benny Benassi: Right now Alle and I are influenced by so-called future house and some current techno records but we try to make records that sound like Benny Benassi.

Cat: Where would you say you primarily draw inspiration for your music from?

Benny Benassi: It changes all the time really, I gather inspiration from all types of music.

Cat: Your hit “Satisfaction” is over a decade old, and yet, people continue to remix it and play it in sets. What is it about that song that keeps it in heavy rotation all these years after its creation?

Benny Benassi: I don’t know but I’m happy it did!

Cat: After playing Global Dance Festival, you head back to Europe for a bit. What performances are you looking forward to most in the upcoming months?

Benny Benassi: I’ll be back in Ibiza at Ushuaia with Avicii later this year and Pacha with Steve Aoki and TomorrowWorld in September back in the US should be fun.

Cat: As mentioned previously, you recently released “Who I Am.” Will you be putting out any other new music in the near future?

Cat: You’ve been in the dance music industry for 20-plus years. What do you think you’d be doing if you weren’t a producer or a DJ?

Benny Benassi: I would have been a professional cyclist (cycling is a big sport in Italy), which isn’t a proper job really… 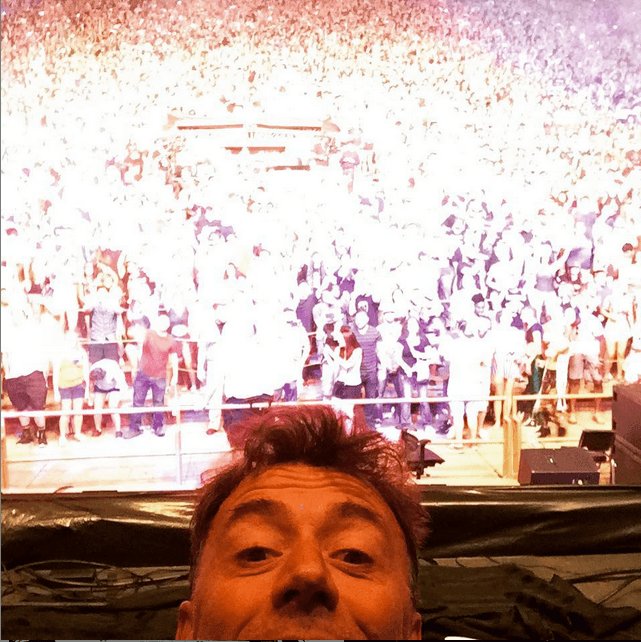 Benassi during his Global Dance Festival set at Red Rocks

Benassi’s Global set was fun and high energy and stayed true to the signature sound that his fans have come to know and love. Despite having been in the dance music scene for over two decades, Benassi still clearly loves what he does and hopefully he will do so for many years to come.

Check out his latest release with Marc Benjamin feat. Christian Burns, “Who I Am”: