Posted On November 13, 2015 By Cat Hausler In Artist Interviews, Music

It’s 10:30 p.m. on a Saturday and I’m standing backstage at the National Western Complex in Denver. I look down at my tennis shoes then readjust the horn on my head, wondering how the LED will look when I turn it on later. Let me explain… I’m about to interview one of the biggest names in EDM and I’m dressed as, you guessed it, a unicorn. Did I forget to mention it’s Halloween? No matter the holiday, I look a little ridiculous, but I’m trying not to let that distract me from the fact that I’m about to sit down with one of my favorite producers, Borgeous.

Best known for his 2013 megahit, “Tsunami,” with dance music duo DVBBS,  Borgeous (real name John Borger) has not slowed down since entering the scene. With solo hits like “Invincible,” “Wildfire” and “They Don’t Know Us”, to name a few, Borgeous has very much made a name for himself in EDM. Apart from his music, Borgeous has also come to be known for his high energy live shows that span a variety of genres and tastes. Another point in favor of the producer? Borgeous has developed a huge following and interacts regularly with fans through via social media accounts, on his radio show (House of Borgeous on Sirius XM) and at meet and greets that he schedules in just about every city he tours in.

Unashamed of my costume when I left the house, I’m suddenly feeling bashful about my unicorn get up when I enter Borgeous’ dressing room. But he instantly puts me at ease as he chuckles and says, “It’s Halloween, you’re supposed to dress up!” So, costumed and ready to talk, I sit down with one of EDM’s freshest talents, Borgeous. 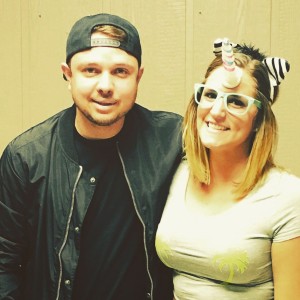 Cat sat down with Borgeous on Halloween.

Cat: Since “Tsunami” with DVBBS blew up two years ago, you’ve seen huge success – you’re touring all over, all of your new music is doing well, etc. Tell me about how you originally got into djing and producing and how you’ve grown into the artist you are today.

Borgeous: It really started with me just falling in love with the scene. I was going to shows a lot and I was in the industry, promoting and things like that. I’ve always worked on music, just not electronic music. I went to EDC one year- this is when EDC was in LA and you’d go to EDC and buy your ticket that night. *he laughs* You didn’t have to worry about buying your ticket a year in advance.

Then I just started working on music and putting out free downloads and just hustling blogs and trying to get my name out there and getting out all my free songs. Then “Tsunami” [with DVBBS] happened. So it was really just a hustle for like a year and then “Tsunami.”

Cat: You recently played a few shows in Columbia. What was that like? Where will you head to next?

Borgeous: Bogota was amazing. It was a beautiful, beautiful city. It was my first time in Columbia.

I’m heading to Asia tomorrow – Jakarta, Kuala Lampur, Bangkok and Manilla. So I go there and then I come back and I have my first show at Omnia in Las Vegas. So I’ll start my Omnia residency.

Cat: What would you say is your favorite thing about touring?

Borgeous: Just seeing new places and meeting new people. But touring is draining, I come home and I don’t really want to do anything. It’s nice to be able to relax after all of that.

Cat: Let’s talk about your music. A lot of your songs are very melody driven (“Invincible”, “Wildfire”, etc.), but then you have songs like “Tsunami” and “Toast” and your trap remix of “My Sweet Summer” which have a totally different feel. How would you describe your personal sound?

Cat: I want to talk about “They Don’t Know Us.” That song really struck a chord with me and of course it became the “ravers anthem” of the spring and summer. How did that song come about?

Borgeous: I worked with Julia who I did “Invincible” and “Wildfire” with. Basically, she was working on some stuff and I kind of gave her an idea of what I wanted to do and she sent me these vocals that she worked on and I was like, “These are perfect, I don’t need to do anything else.” And we kind of went back and forth a little bit, then it kind of just came. That song was actually a quick process, it didn’t take much time at all.

Cat: You’ve released a lot of new music this year and still, you have “Sins” and “Souls” coming out on November 6th. Tell me the story behind those songs.

Borgeous: “Souls” comes out first and then “Sins” right after that the same day. Both music videos play off of each other in a way. “Souls” is with Michael S. who is now M.Bronx, he did that song with Audien, “Leaving You.” His voice is amazing, he’s an amazing writer. We were talking about working on some stuff and I just fell in love with these vocals. Then, next thing I know, it’s my next single. We shot the videos in LA for both songs in two days. It was awesome!

Cat: You have a radio show, House of Borgeous, which is clearly something you love doing. What goes into putting that show on and what do you like most about doing it?

Borgeous: As far as putting it on, I go to New York and work on the show and take phone calls from fans. Every show I want to have some kind of interaction with fans. I like doing that, I like doing the phone calls. It’s funny and entertaining and exciting to hear their enthusiasm. That’s awesome! Whoo Kid comes on sometimes and my boy Dre that works at Sirius XM helps too, so we all kind of get together and work on the show. I like working on it because I’m able to let people hear new music, whether that’s displaying my new music or other people’s music that hasn’t been discovered. So that’s pretty cool.

Cat: You’re playing Denver where you have a huge following, on Halloween to top it off. What does is feel like to be back in Colorado? Can you tell me a little about tonight’s set?

Borgeous: I love being in Colorado. Denver is awesome. I always play Denver like three or more times a year. I have a bunch of new stuff I’m playing, some new edits. And of course all of my music and some new stuff. In an hour it’s tough to play as much as I’d like. But I’ll try to squeeze in as much as I can.

Cat: You are so loved by your fans. You interact with them on social media, you make a point of meeting up with fans in each city you play in, you chat with them on your radio show… Talk to me about that.

Borgeous: I always thought it was pretty cool when I’d meet DJs or celebrities when I was on the other side of the fence. That’s a feeling that always stuck with me, so I think it’s cool to give my fans that experience. I just love meeting my fans. It’s pretty awesome. I did it today actually, in the hotel lobby.

Cat: You’ve released so much new music in the last year and essentially haven’t stopped touring. What does the future hold in store for you? Big new releases? Collabs? Shows?

Borgeous: I have a hard ticket tour in January and February. “Souls” and “Sins” are about to come out and I’m working on an album. I have a song that I’m working on with Neon Hitch and a few other collabs that are coming together. I’m really just trying to work on a small EP for next year.

Borgeous’ HallowFreaknWeen set was fun, fresh and full of energy. The American producer played all of his fan favorites while also sampling other dance hits and a plethora of other genres. It was my third time seeing Borgeous and he continues to be one of my favorite DJs to see live.