Posted On April 11, 2014 By Renée Rapin In Buzzworthy, The Scene

Earlier this week in San Francisco. four Smart cars were turned on their sides in an act of vandalism. Police are investigating suspects and so far the only lead they have are reports of seven hooded figures. Someone call Snow White! Just kidding, there were no reports on their height. Authorities are also trying to decide whether these are just random crime acts or a protest/hate-crime against Smart cars. But you know what I think? I think those hipster city-folk want to have their own version of cow tipping. So they found the next abundant cow-sized item in their city to tip. Oh Japan. You would. And you did. Every year the Japanese people celebrate Kanamara Matsuri, translated to “Festival of the Steel Phallus.” This festival is a celebration of fertility and penises. Yep. The event includeds a phallic float parade, penis-shaped candy and other tchotchkes.  This festival is believed to have started in the 17th century to protect prostitutes from STDs. Today the festival raises awareness for safe sex and HIV prevention. She’s way to happy to be riding that.

Early this week, firefighters and hazmat crews in Colorado responded to an outbreak of skin irritations which caused a local school to be evacuated. Students were hosed down and “decontaminated” outside in a cordoned-off tent. 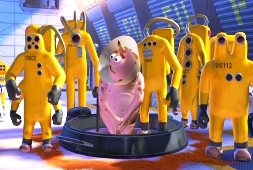 I totally thought of this guy when reading this. 2319!!

Many students were taken to the hospital to be treated for what looked like a serious allergic reaction. The school was closed for authorities to examine exactly what caused the outbreak. Apparently 6 habanero peppers were the cause. Officials found remains of the peppers scattered in the wood chips of the children’s playground. No one is really sure how they got there but the school is taking all precautions to make sure every piece of equipment is washed down. 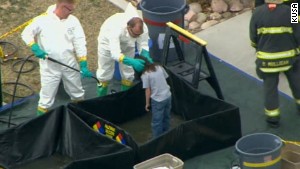 So much freaking out for just PEPPERS.

As the CNN Eatocracy editor says, “It’s all fun and games until you get some pepper juice in your eye, and then it’s as if the sun is exploding.”

Can you guess where this happened? Yes you’re correct! It was Florida. A woman wearing nothing but a thong barged into a McDonalds this week and went absolutely nuts. That is until she relaxed and french kissed the soft serve ice cream machine. The woman in the video can be seen banging her head on the counter and basically going bat-shit crazy in the kitchen. I really love how the workers and possibly cops just kinda sit back and let her do her thing. So…drugs? She claims this was just an outbreak of her bipolar issues. Or maybe it’s just that healthy Florida air. I’ll let you decide, see the video here. WARNING: Not attractive nudity.