Posted On June 26, 2014 By Ryan Daugherty In Sports, Sports Takes

The 2014 NBA Draft is only two days away and there is already a shake up at the top. Kansas center Joel Embiid was pretty much the unanimous pick to get drafted first overall to the Cleveland Cavaliers, but a recent foot injury during workouts, tacked on to the season ending back injury he suffered this past season supposedly has scared many teams away.

It’s rare to find a center with Embiid’s talent both offensively and defensively, and some team will be ecstatic with the risk they take of drafting him, but is it worth taking potentially another Greg Oden?

Aside from Embiid, this year’s draft is pretty deep, and there are still a few potential franchise players to be taken instead of Embiid. Here is a complete first round mock of what I think should go down Thursday night.

1. Cleveland Cavaliers – Andrew Wiggins, SF Kansas: The Cavaliers haven’t been the best drafters ever since landing LeBron James in 2003, but there is no way they can miss with this pick. Wiggins is the best player in the draft, and even with a healthy Embiid, he probably still takes the cake. A starting lineup of Irving, Waiters, Wiggins, Thompson and Varejao/Hawes certainly makes you cringe on the defensive side, but the potential for that lineup with Bennett off the bench is sky high. 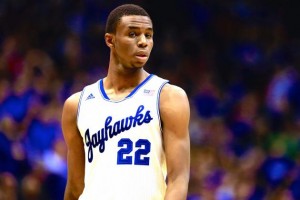 2. Milwaukee Bucks – Jabari Parker, SF Duke: The Bucks drafted a small forward last year in Giannis Antetokounmpo, but he can play shooting guard for them if he has to. Regardless, Parker is simply too talented to pass up. The Bucks were 28th in offense last season at 95.5 points per game and Parker is certainly the best pure scorer in this draft. He could potentially average 20 points per game playing both forward positions his first season in Milwaukee.

3. Philadelphia 76ers – Julius Randle, PF Kentucky: Randle has been slipping to as late as 6th and 7th in many mocks, but Philadelphia needs a power forward next to Nerlens Noel and Randle is the best power forward in this draft in my opinion. He may be a bit undersized, but he is a monster rebounder. He does need to work on his post-up game as he shot only 39.3% on post-up plays while at Kentucky. Still, he is only 18 and having a power forward/center duo consisting of two lottery Kentucky players is a very good thing.

4. Orlando Magic – Dante Exum, PG Australia: Orlando has a pretty bright future with Victor Oladipo, Moe Harkless, Tobias Harris and Nikola Vucevic. Jameer Nelson is 32 years old and Exum has star potential. An Exum/Oladipo back court would be one of the most explosive backcourts in all of basketball.

5. Utah Jazz – Joel Embiid, C Kansas: Joel Embiid’s slide finally ends at the fifth pick. Enes Kanter has been solid for Utah but hasn’t been the starter they quite wanted. An Embiid/Favors front court would be golden if Embiid returns to full form after the three to four months he is out. If it doesn’t work, then a Kanter/Favors front court is still something solid to build on. 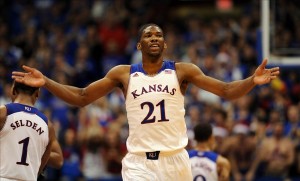 6. Boston Celtics – Noah Vonleh, PF Indiana: Part of me thinks that Boston will trade this pick for Kevin Love on draft day, but sticking to the mock, they will take the best player available. That player is Noah Vonleh. Vonleh is extremely versatile and is arguably the best power forward in this draft class. He would battle Sullinger and Bass for minutes at the 4 and could even play some 5 with the lack of depth for Boston.

7. Los Angeles Lakers – Marcus Smart, PG Oklahoma State: Just like the Celtics, the Lakers will take the best player available and that player at this point is Marcus Smart. Los Angeles’s point guards are Jordan Farmar, Kent Bazemore and Kendall Marshall — which is not good. Smart is the last player remaining with any star potential in my opinion and the Lakers have no choice but to take him.

8. Sacramento Kings – Aaron Gordon, PF Arizona: Sacramento has every position but the power forward position on lock currently. Gordon may be the most athletic player in the draft, but he is undersized and his offensive game is very limited. Still, he has plenty of time to work on his jump shot and post game. He should fit in nicely next to DeMarcus Cousins.

9. Charlotte Hornets – Rodney Hood, SG Duke: The Hornets (formerly Bobcats) really like to make head scratching picks so this year they take a name that most have being taken around the 15-20 range. The name may be uncommon, but Rodney Hood has potential to be a pretty good player in this league. Charlotte needs scoring, and Hood does just that. In my opinion, Hood is the sleeper of the draft and could turn out to be one of the best players taken.

10. Philadelphia 76ers – Doug McDermott, SF Creighton: McDermott was the best player in college basketball, and if it weren’t for his size and lack of athleticism, he may be a top 5 pick. The 76ers need any offense they can get, and they get McDermott after selecting Randle. Thaddeus Young may not be around much longer so McDermott fills a scoring role the 76ers desperately need.

11. Denver Nuggets – Zach LaVine, SG UCLA: The Nuggets have plenty of offensive talent so why not add more? LaVine is a big unknown at this point and is extremely raw. His athleticism is insane and he can shoot. Whether or not he pans out, this is a risk that Denver must take.

12. Orlando Magic – Kyle Anderson, SF UCLA: Anderson is a point forward and Orlando needs all the talent they can get. Anderson has one of the highest potentials in all of the draft and pairing him with Exum would be one of the top drafts in the NBA.  Harkless/Anderson duo at small forward would be something great to look forward to for the next ten years.

13. Minnesota Timberwolves – Gary Harris, SG Michigan State: The Timberwolves will need some scoring if Kevin Love gets traded. Harris is primarily a jump shooter, but he is also a pretty good defender. He could have a solid season set up for him coming off of Minnesota’s bench.

14. Phoenix Suns – Dario Saric, PF Croatia: The Suns have three first round picks so they can afford to take Saric here. Saric just signed a deal that will keep him in Croatia for three more years, but the Suns can take that chance. Saric is one of the more talented players in this draft and the reward for Phoenix could be golden in a few years. 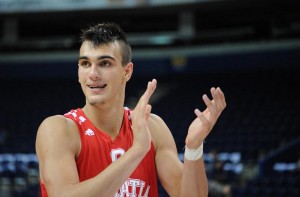 15. Atlanta Hawks – TJ Warren, SF North Carolina State: Warren was one of the best scorers in college basketball and that is exactly what Atlanta needs. DeMarre Carroll and Kyle Korver are great for Atlanta, but after that they lack a scorer off the bench. Warren can fill that role nicely backing up Carroll.

16. Chicago Bulls – Nik Stauskas, SG Michigan: The Bulls are one of the best defensive teams in the league so they need to add some offense this offseason. This is why they take the best shooter in the draft. Stauskas would be a great option off of the bench behind Jimmy Butler. It wouldn’t surprise me if Chicago took a point guard with this pick or the 19th however.

17. Boston Celtics – Elfrid Payton, PG LA Lafayette: Payton has been climbing up draft boards for quite some time now. It still isn’t clear if Rajon Rondo has any future with the Celtics so Elfrid Payton is their option. Payton could be the steal of the draft, but he does need to work on his jump shot.

18. Phoenix Suns – James Young, SG Kentucky: The Suns need depth and James Young provides just that. Young could be pretty inconsistent in the NBA but he can score the ball. The Suns might not have room for Gerald Green or even potentially Goran Dragic if they have plans to land a big player in the near future so James Young is a great pick for them right here. 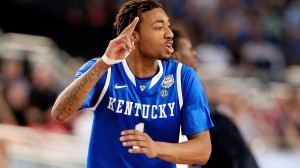 19. Chicago Bulls – Adreian Payne, PF Michigan State: The Bulls could amnesty Carlos Boozer this offseason so Payne could fill in his role as the backup power forward to Taj Gibson. The knock on Payne at Michigan State was his motor, but he is a very talented player. He will have to earn his minutes on the defensive side on Thibodeau’s team.

21. Oklahoma City Thunder – Glenn Robinson III, SF Michigan: Anyone who watched the playoffs knows the Thunder desperately need scoring off the bench. Enter GRIII. Robinson already offers way more offensively than Thabo Sefolosha who may be nearing an end with the Thunder. Robinson would be a perfect backup to Jeremy Lamb and could already be the second best scorer off of the bench after Reggie Jackson.

22. Memphis Grizzlies – Cleanthony Early, SF Wichita State: The Grizzlies are a great team, but they really need anyone who can shoot the ball. Early can not only shoot, but he can play multiple positions. Tayshaun Prince is getting near the end of his career so Early would have a chance to start in the future for Memphis.

24. Charlotte Hornets – Mitch McGary, C Michigan: McGary’s suspension hurt his draft stock, but the Hornets need some big man depth. McGary isn’t exactly the best offensive center, but he can rebound and he puts forth effort sort of like a Nick Collison player. The Hornets would have a frontcourt of Jefferson, Zeller, Biyombo and McGary. Not the best, but certainly much improved from a few years ago.

25. Houston Rockets – Clint Capela, PF Switzerland: Houston has plenty of scoring, but they lack size at the power forward position. Terence Jones is a beast, but he is a bit undersized. Capela would be perfect coming off of the bench for the Rockets. Having Capela and Montiejunas gives Houston two different players at the backup power forward position.

26. Miami Heat – Shabazz Napier, PG Connecticut: Miami is fortunate to have a pick in this loaded draft. There are already rumors of Miami trading up to solidify getting Shabazz. Napier may not be the best point guard in the draft, but he will be a very solid player in the NBA and has that “it” factor in the big moments. 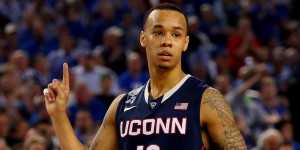 27. Phoenix Suns – Tyler Ennis, PG Syracuse: The upside for Tyler Ennis at this pick is crazy. The Suns current backup point guard is Ish Smith. Ennis would bring an explosive option off the bench for Phoenix’s up tempo offense.

28. Los Angeles Clippers – Jarnell Stokes, PF Tennessee: The Clippers need a backup for Blake Griffin and Stokes fits that role. He is a banger down low and rebounds with the best of them. Plus, Chris Paul will get him easy shots when he’s in.

29. Oklahoma City Thunder – Jordan Adams, SG UCLA: Just like last pick, OKC needs offense off of the bench. Adams was one of the best scoring 2 guards in the nation last season. Having Adams and Robinson off the bench would mean the Thunder did a fantastic job with their first round picks.

30. San Antonio Spurs – Jerami Grant, SF Syracuse: Grant would be a perfect fit for San Antonio, but then again who isn’t? Grant is a great athlete who could make an impact from day one behind Kawhi Leonard.