Posted On September 15, 2014 By Ryan Daugherty In Sports, Sports Takes

The best offense in college football has opened up the season with a light non-conference schedule, but they have shown that they are just as good as last year’s team in almost every measure of the game.

The Bears opened up the first week of the season hosting SMU for the first annual game in McLane Stadium. The Bears opening performance was just as beautiful as the stadium on the Brazos as they dominated the Mustangs, winning 45-0. While the offense wasn’t as explosive as it wanted to be, the defense had their first shutout against a BCS team in 19 years.

The victory came with many negatives however. Heisman candidate Bryce Petty was limping in the first quarter and although he finished the first half, it was revealed he had broken two bones in his lower back. The Bears also had a few injuries to their wide receiving corps. Antwan Goodley played 2 series before he was ruled out of the game. Levi Norwood also broke his hand which required surgery and up to a month of recovery. Corey Coleman and Clay Fuller were already out for the game and will remain out until Baylor’s first conference game against Iowa State in 14 days.

Through the injuries, Baylor still managed to find stars in their fifth and sixth receivers on the depth chart. KD Cannon and Davion Hall, both freshman, proved that they are the real deal, particularly Cannon. Cannon finished with only 2 catches for 59 yards, but one of those was a 46 yard TD, his first ever collegiate reception. Davion Hall finished with 7 catches for 86 yards including many impressive short catches.

The Bears next played Northwestern State without Petty, Goodley, Norwood, Coleman, Fuller, and backup runningback Devin Chafin. It didn’t matter. Baylor dominated, winning 70-6 and racking up 720 total yards of offense. Backup quarterback Seth Russell looked like a Heisman candidate as he threw for 438 yards and 5 touchdowns IN THE FIRST HALF. The majority of those yards went to KD Cannon, as the freshman reeled in 6 catches for 223 yards and 3 touchdowns. The scary thing is all of those scores came in the first quarter as Cannon scored on plays of 50, 81, and 42 yards.

Defensively through two games, the Bears had not given up a single touchdown, and also led the nation in rushing defense and sacks per game. Granted the competition was pretty easy, but not too many teams can shut down teams like the Bears did through the first two weeks.

The final non-conference game for Baylor was on the road against the Buffalo Bulls, a team which Baylor destroyed 63-21 last year. The Bears only returned one of their injured players, but it was Bryce Petty who didn’t miss a beat throwing for 416 yards and 4 touchdowns in 3 quarters of play. The Bears scored on their first drive with a Shock Linwood touchdown, but it was yet again KD Cannon who stole the show. On their second drive, the Bears were on their own 11 when Petty launched the ball for an 89 yard TD to Cannon.

Through three games, KD Cannon leads the nation in receiving with 471 yards. He has gained that yardage on 14 catches with 5 touchdowns (tied for the league lead) on a 33.6 YPC average. Simply put, KD Cannon is the real deal. 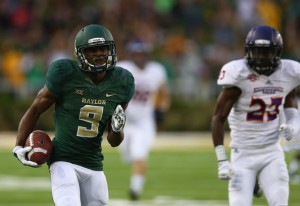 Baylor played an almost perfect first half on both sides of the ball, leading 35-0 at halftime. The 3rd quarter was a a different story. It was the first time all year that Baylor looked vulnerable defensively. The Bulls gashed the Bears defense and scored on a 41 yard rushing TD that should have been stopped for a loss.

The offense had no problems as they continued to march down the field with ease, but the defense continued to give up big plays, especially on the ground. The defense gave up another 41 yard rushing TD that should have been a loss of yards, and a passing TD where cornerback Terrence Singleton simply just fell down. The Bears ended up winning 63-21, and while that is an accomplishment that many teams would celebrate, Art Briles and defensive coordinator Phil Bennett didn’t look happy at all throughout the game.

The Bears sit at 3-0 and are currently #7 in the nation. They have outscored their opponents 178-27. It has been a relatively easy schedule so far, but the Bears have shown us exactly what they showed us through their first 3 games last season: they are arguably the best offense in the nation and their defense can potentially be SCARY GOOD. The defensive line is as good as ever as 6’9 280 lb Shawn Oakman leads the way. The rest of the starting defensive line (Jamal Palmer, Andrew Billings, and Beau Blackshear) have been just as impressive as they  have allowed virtually no rushing yards through these three games.

The concern for the Bears defense is their extremely young secondary. Xavien Howard has looked like a superstar cornerback through these games and Orion Stewart looks poised to have a great year, but the rest of the secondary still has much to prove. Overall, the defense looks like it can be elite, but of course they will have to prove it in conference play.

The Bears have a bye week next week, so their next game will be in Ames, Iowa as they face Iowa State on September 27th. The extra time will prove to be highly beneficial as they look to return the majority if not all of their injured players for the Iowa State game.

The Bears are clearly one of the two best teams in the Big 12, but they will have some road challenges in the upcoming schedule. Away games at Texas, West Virginia, and of course Oklahoma could be more challenging than they expect. Of course the Big 12 title runs through Oklahoma. The Bears have never beaten Oklahoma in Norman, and no matter how good they are this season, it is a very good possibility that that streak stays alive. I will not be surprised if Baylor runs through Oklahoma and picks up a double digit victory, most likely securing the Big 12 title AND a trip to the playoff. On the other hand, I would not be surprised to see Oklahoma absolutely trample them.

Nonetheless, if the Bears want to be Big 12 champions in back to back years including a legit shot at the playoff, they know that they will have to play their greatest game in program history on November 8th in Norman,

Congratulations Baylor on the fast start. Now go out there and show America you are here to stay at the top.

1. Bryce Petty is one of the three best quarterbacks in the nation, hands down.

4. Baylor is in trouble with their kicking game (kicker is 1-5 so far).

5. The running game has not been all that impressive so far and could be a cause for concern later in the season.