Posted On June 20, 2014 By Ryan Daugherty In Sports, Sports Takes

Baylor Bears Football 2014 Preview: Can They Win The Big 12 Again?

Art Briles is running something pretty special in Waco, Texas.

Baylor football has been the laughing stock of the Big 12 pretty much since it’s inclusion in 1996. From 1996 to 2009, Baylor did not record a single winning record. In these 13 years, the Bears total record was 43-101 including an abysmal 14-85 in Big 12 play. Something changed after that.

Since 2010, the Bears have been on a magical run with their four best seasons in school history. They have gone 36-16 over these four years including 22-13 in Big 12 play.

What has all of this been good for? Well for starters, the Bears have made a bowl in each of these seasons including their first BCS bowl appearance in school history in the Fiesta Bowl in 2013. The Bears have led the nation in total offense for the past two seasons, and were only some hundred yards away from leading the nation the year prior to those. Perhaps the year that started this potential college dynasty, Robert Griffin III won the first Heisman Trophy in school history in 2011. And of course, the Bears won the Big 12 in 2013 for the first time in school history with a record of 11-2 (8-1 in Big 12 play).

Baylor’s 2014 season starts in 73 days and they are confident in a repeat, but do they have what it takes to pull it off? The Bears still have the majority of their nation leading offense including 2013 Heisman candidate junior QB Bryce Petty, senior WR Antwan Goodley, and sophomore RB Shock Linwood. Baylor lost star receiver Tevin Reese, but they signed two of the top receivers in the nation in K.D. Cannon and Davion Hall. Returning receivers junior Clay Fuller, sophomore Corey Coleman, and senior Levi Norwood will have bigger roles in the offense as well. 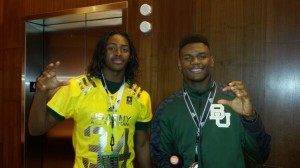 The big question mark for this Baylor team is their defense. The Bears will enter the 2014 season with eight new defensive starters. Key losses from last year’s team include safety/linebacker and defensive leader Ahmad Dixon and linebacker Eddie Lackey. Last season, the Bears ranked 36th in the nation allowing 23.5 points per game including holding Big 12 powerhouses Oklahoma and Texas to 12 and 10 points respectively.

Any reservations on an elite 2014 defense should be held until we know more about the Bear’s secondary. The entire starting secondary is brand new aside from sophomore safety Orion Stewart who started a few games last season. The starting cornerbacks include sophomores Terrence Singleton and Xavien Howard, and  junior Georgia transfer Chris Sanders. The starting safeties are the aforementioned Stewart and junior Terrell Burt.

The one constant for Baylor’s defense will be its defensive line which is one of the best in the nation. The Bears lost starters Terrance Lloyd and Chris McCallister, but will be starting junior DE Jamal Palmer and 6’9 junior DE Shawn Oakman who are arguably even better. Also starting on the line will be sophomore sensation NT Andrew Billings and junior DT Beau Blackshear. It doesn’t hurt that five-star DT JaVonte Magee will be rotating in with Blackshear. 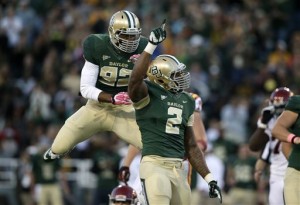 Of course it can’t be ignored that Baylor’s out of conference schedule last season was painfully weak, and Big 12 teams such as West Virginia, Kansas, and Iowa State aren’t exactly good teams either, so the statistics they put up can be a little skewed in the big picture.

2014 is going to be more of the same with the first three games against SMU, Northwestern State, and Buffalo. Their first conference game will be at Iowa State the week after playing at Buffalo. The Bear’s first real test will be October 4th in Austin, Texas against the Texas Longhorns. Baylor is clearly the better team as Texas is currently in a “rebuild” phase under Charlie Strong. Regardless, the game will still be a big test for the Bears as the road hasn’t been kind to them against bigger teams.

The biggest game of the season for the Bears comes in Norman, Oklahoma against the Sooners who many are picking to win the Big 12. Baylor throttled the Sooners last season 41-12, but this year is different. Last season, the Bears had multiple promising home victories heading into the biggest game of the season, a road game against Oklahoma State. The Cowboys thrashed the Bears 49-17, virtually ending any hopes for a shot at a national title. This year, the Sooners can be that same road block for the Bears who are 2-21 all time against them, and have never won a game in Oklahoma.

Smart money says that Baylor should lose this game, and even as a current Baylor student, it’s hard to be optimistic. Still, it’s hard to doubt Art Briles and this Baylor football squad. It could go either way, but heading into the game, the Sooners remain the favorite.

The Bears finish their season with a home game against Oklahoma State, a game in AT&T Stadium against Texas Tech, and then a home game against Kansas State. The Bears should win the Kansas State game pretty easily, but the other two games present some challenges for them. It’s hard to bet against anyone playing Baylor in Waco, but Oklahoma State has the athletes to pull off an upset win.

Baylor will look to beat the Red Raiders in a shootout in AT&T Stadium, and while odds are they will out-shoot them, it could be interesting for a while. Last season, the Red Raiders trailed the Bears 21-20 after the first quarter, but Baylor’s offense woke up and outscored them 42-14 the last three quarters.

Ultimately the Bears will remain one of the two best teams in the Big 12 alongside Oklahoma, but the game in Norman will likely decide who the Big 12 champion will be. So the answer is yes, the Bears can repeat and win their second Big 12 title, but the road to that title runs through the Oklahoma Sooners.