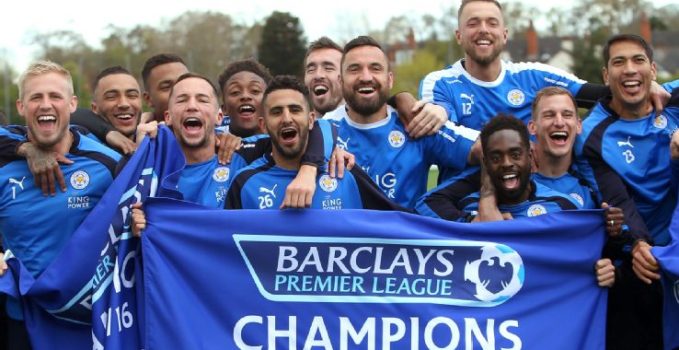 Moneyball 2016: How Leicester City is the Oakland A’s of Soccer

A team with no money just won the English Premier League. Vegas had them at 5,000-1 odds. Nobody, including their mothers, picked them to win the title. But it’s clear to me how this happened. To hijack a line from the film Moneyball, “We are card counters at the blackjack table and we’re going to turn the odds on the casino.” Here’s what transpired…

Leicester City flipped the script on the excruciatingly top heavy Premier League. A league in which 3 powerhouse clubs have dominated title wins for over 100 years (Manchester United, Arsenal, Liverpool). And they did it by taking calculated risks and selecting players who could execute a defined plan. In other words, patterning their team like the “Moneyball” Oakland A’s.

A season ago Leicester City finished in 14th place, narrowly missing relegation into the lower divisions of English soccer. Going into this season, fans were merely hoping to escape relegation yet again. What would transpire over the past 9 months are nothing short of fairy tale, to many. But to a proponent of statistical analysis, their results actually make a whole lot of sense. Let’s break it down:

Most Premier League analysts will tell you NOT to play the 4-4-2. It’s antiquated, puts teams too much on the back foot, and prevents strong forward play. Much like the manner that baseball prognosticators railed on Oakland’s use of on-base percentage + slugging (OPS) as a reliable stat, the British elite thought Leicester were utterly retarded for using an old formation. But the club responded with a figurative, “you all suck, we’re going to give this idea a fighting chance” mantra. And it worked. But it didn’t fall out of thin air. A series of intelligent roster moves set the pieces in motion.

Leicester signed veteran defensive player Wes Morgan, who was previously a mainstay in the lower levels of English soccer. Playing in the lower levels makes a player mighty cheap, and LCFC jumped on him. They also got 2006 World Cup star Robert Huth (who is so old he’s from EAST Germany). You think any other Premier League club wanted these guys? Nope. But Leicester knew they’d fit aptly within their defensive system.

Their back 4 defenders not only stopped any attacking team in their midst, but they could innately propel an aggressive counter attack to land easy scoring chances.

From here, it was the job of glossed over midfielders like Danny Drinkwater (most teams feel he’s undersized at 5’9) to continue the momentum of the advancing play. He would keep the ball rolling all the way up to goal scoring machine Jamie Vardy, who will likely finish 2016 as an astounding 3rd in the league in goals scored. Why is it astounding?

The 29 year old Englishman competed in low level soccer until he was 25, having to juggle day jobs at factories in order to pay his bills. Despite posting high goal totals at every level, Premier League elitists scoffed at his lack of size and agility.

It wasn’t until May 2012 when Leicester City recognized Vardy’s potential and signed him to a tawdry 1 million pound contract. Quite a bargain in hindsight. The two men ahead of him in goal scoring this season earn about 30 times that money (Harry Kane, Sergio Aguero).

What Vardy lacks in quickness, he more than compensates for in shooting accuracy and sprint speed. His implementation into a counter attacking strategy would offensively invigorate Leicester to their improbable title run.

This is where moneyball kicks into high gear. Leicester realized they couldn’t beat teams mano a mano, so they openly conceited the time of possession stat. Instead, they dropped way back into defense and waited for their opponents to screw up. More often than not, they did.

Leicester then utilized their cohesive roster to rapidly accelerate the ball up field where they had a numbers advantage. From there, goals were profitable. Not a lot, but enough to beat their bewildered opponents who failed to grasp simple math.

A’s General Manager Billy Beane eluded to the inconvenient reality that if his team tried to play like the Yankees, they would lose to the Yankees. Similarly, Leicester City knew they wouldn’t beat the likes of Manchester United if they tried to emulate them. This combination of a 4-4-2 formation intertwined with unprecedented teamwork boosted the Tigers to a Premier League title.

They didn’t reinvent the wheel, but Leicester exploited serious holes in the English pro system. The Manchester Uniteds of the world are wading in wealth, but wealth alone can’t defeat strategy and mindset. Leicester showed once and for all that buying into a system can garner amazing results versus buying into mere individuals.

With the proper pieces aligned, a little luck, and adherence to game plan, anything is possible. In sports and in life. LCFC proved this to the world.