Posted On March 24, 2014 By Ascher Robbins In Sports, Sports Takes

From 68 to 16: What We’ve Learned in March Madness So Far

Alright guys. It’s two in the morning, and I’ve done very little except watch basketball for the past four days. This is by no means a complaint; actually, thank the Lord Almighty for four straight days of the sporting world’s greatest spectacle – college ball. But man, has it been a frenzy.

I’ll make this intro brief: Madness has been Madness; giants have fallen (Kansas, Villanova, Wichita State, Duke, Cincinnati, Ohio State, and more), a few groups of men are looking fantastic in glass slippers (Dayton, Tennessee, Stanford), and a few of the country’s best players were sent packing before they had properly unpacked (Jabari Parker, Marcus Smart, Sean Kilpatrick, and so on). So what are we left with? 16 teams with dreams of glory. Here’s what this year’s March Madness has taught me thus far… 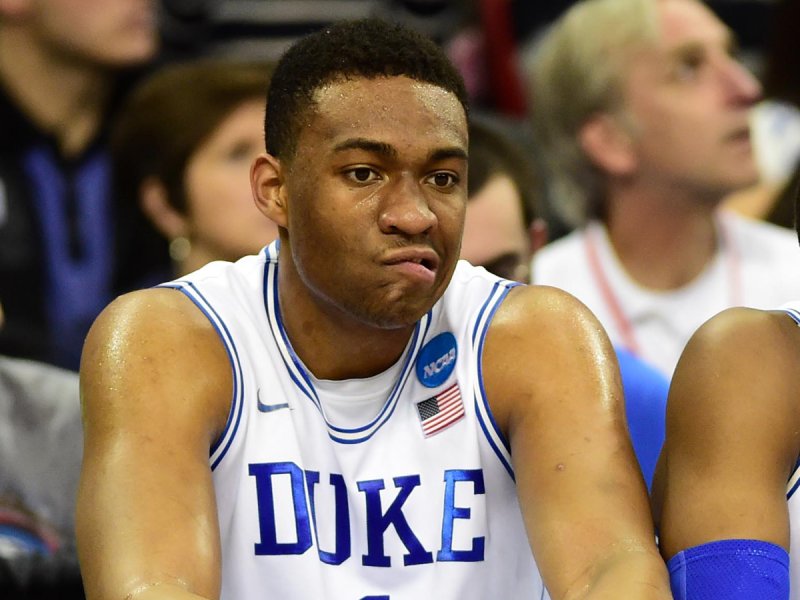 Don’t be too bummed, Jabari. I think your signing bonus this summer might ease the blues.

One-and-done freshman phenoms are SO 2 years ago.

With apologies to Arizona’s Aaron Gordon, and Kentucky’s entire team, this year is proving true the ages-old college basketball adage about how you need seniors to win in March. As for this year’s freshman headline-grabbers Jabari Parker and Andrew Wiggins? The next time we’ll see them play ball will be in the NBA. Of the Sweet Sixteen remaining teams, we have Kentucky (the youngest team in the entire country), Michigan (the 10th youngest), Arizona (the 27th youngest), and UCLA (the 67th youngest) on the young, inexperienced end of the spectrum. Once you get past those for squads, the remaining 12 members of the Sweet Sixteen are much older, upperclassmen-laden teams. The oldest, you ask? Well that would be Stanford, the 22nd oldest team in America. But the fact that 75% of the Sweet Sixteen teams are outside of the top-third in the youth crew rankings speaks for itself. Senior leadership takes you a lot further than flashy freshmen in 2014. 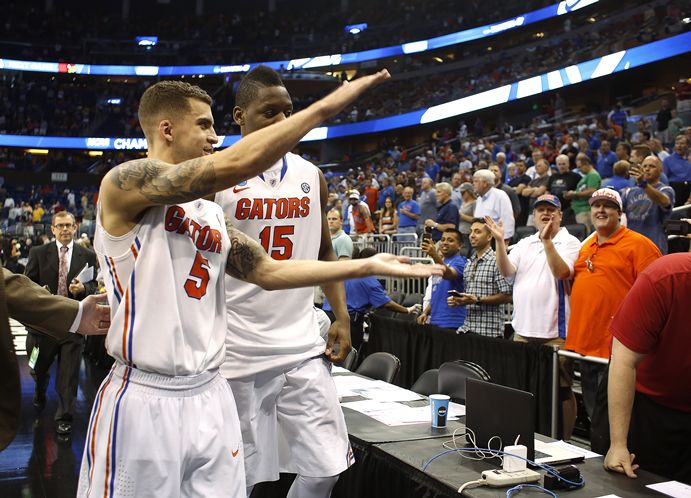 The Favorites: Overall #1 Florida ranks in the top 50 for average age and experience.

The ACC is officially mediocre.

Awful weekend for the usually-dominant ACC. Duke got upset by a Mercer team that then lost to Tennessee – a middle-of-the-road SEC team – by 20. NC State coughed up a huge lead and lost in overtime to St. Louis. Syracuse fell to Dayton. North Carolina needed every second to get by Providence, and then got toppled by an Iowa State team missing one of its best players. Pitt got chomped by the Florida Gators. The ACC’s only team to feel good about is Virginia, who survived an upset scare from the 16-seed Coastal Carolina Chanticleers to get to the Round of 32, where they smashed Memphis. Virginia is carrying the torch for one of America’s powerhouse conferences that was expected to make a lot more noise in the tourney. At least the conference gets Louisville next year. 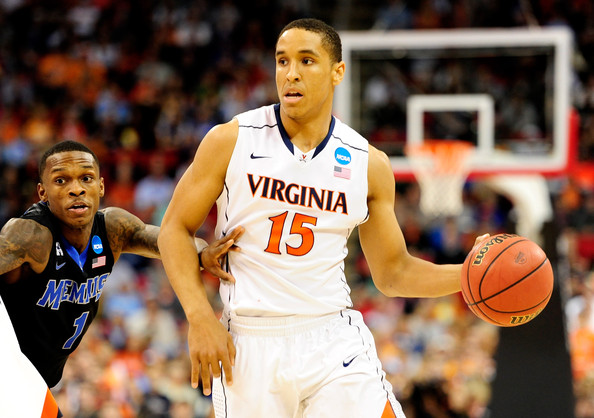 Virginia was the only ACC team to make it through the weekend unscathed.

The Pac 12 is officially legit.

How many people had three Pac 12 team’s making it to the Sweet Sixteen? I thought so. Plus, if Oregon didn’t choke in embarrassing fashion against Wisconsin, we would be looking at four schools from the West Coast still playing ball. Colorado’s horrendous loss to Pitt aside, the Pac 12 has impressed. Not many (myself included) gave Stanford a chance against New Mexico, but after knocking off the Lobos, the Cardinal dispatched Kansas, too, ruining many brackets. Meanwhile, UCLA has slaughtered the teams in front of them thus far, and Arizona might just be the best team in the country. Time will tell, but the Pac 12 is back to relevance in a BIG way after a few down years. 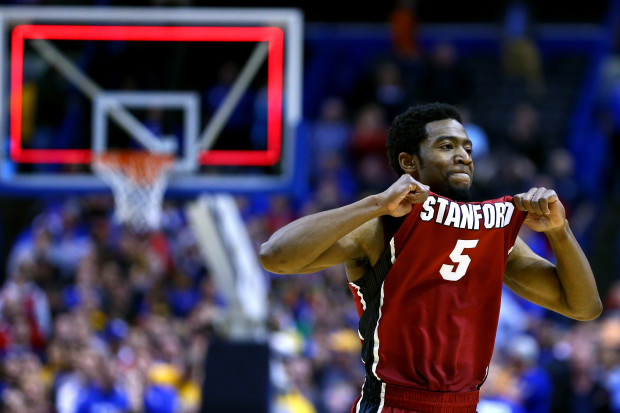 Seeing Red: The Cardinal stunned the Jayhawks on Saturday, advancing to the Sweet Sixteen.

An undefeated season is pretty much impossible.

Ugh. So rough for Wichita State. The Shockers put up one hell of a fight on Sunday, but it wasn’t enough to overcome preseason #1, Kentucky. The committee gave the Shockers the hardest path to the Final Four in human history, and perfection proved unattainable. At 35-1, Wichita State had a hell of a run, but their loss means two things: 1) It will be a long, long time before we see an undefeated season, if we ever do again, and 2) We’re likely going to have to wait another year to see if a mid-major can win it all (PROVE ME WRONG, DAYTON!). 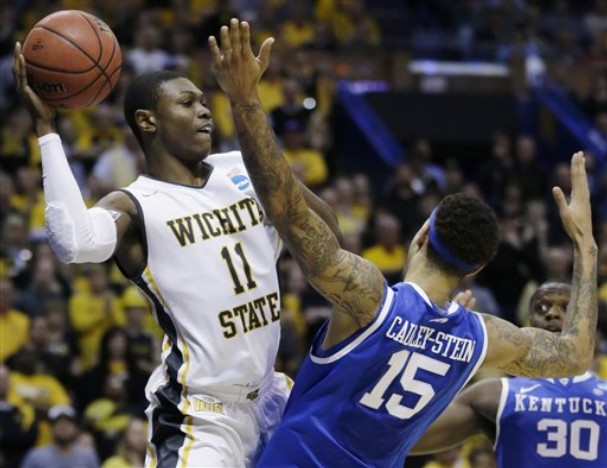 Wichita State came up short, despite a gem of a game from Cleanthony Early.

An Atlantic-10 team is pretty much automatic for a Sweet Sixteen berth these days.

It all started with George Mason in 2006. The next year, it continued as VCU toppled Duke (yes, VCU was relevant before 2011). It peaked with that 2011 VCU squad getting to the Final Four. Last year, it was La Salle. This year, it’s Dayton. Yes, GMU and VCU were originally in the Colonial Athletic Association originally, but no more; they’re part of the mighty A-10, a conference replete with Giant Killers. The Atlantic-10 is a very, very quality basketball conference, and they prove it every single year, as one of the conference’s teams crashes the Sweet Sixteen party annually. Watch out for the Flyers – they wouldn’t be the first A-10 squad to crash the Elite Eight or Final Four, either. 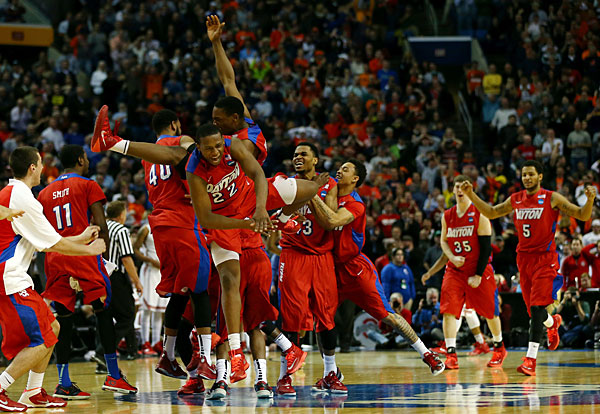 Florida and Arizona are the favorites.

The Gators and the Wildcats have both dominated in their contests so far. Both teams sleepwalked through the first half of their games against 16-seeds before flipping the switch and destroying everything in front of them since. Florida crushed Pitt and Arizona made Gonzaga look silly. These are two talented, deep teams that seem destined for an April 7th clash…which means they’ll probably be upset before then. 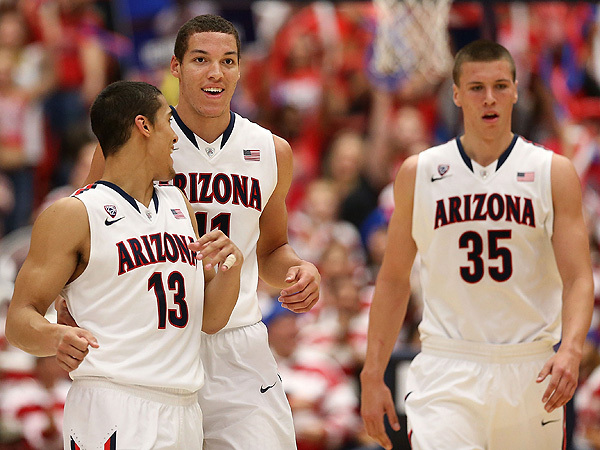 Arizona has been dominant through 2 games.

Watch out for Baylor and Tennessee.

Two teams that many picked to lose in the first round, and two teams that NOBODY wants to play right now. Baylor straight-up eviscerated Creighton on Sunday, after destroying Nebraska in their first game. Tennessee needed overtime in their First-Four game against Iowa, but then beat UMass and Mercer by a combined 39. Both of these teams are loaded with talent, and seem to be peaking at the right time. If I were a Wisconsin or Michigan fan, I would be scared. 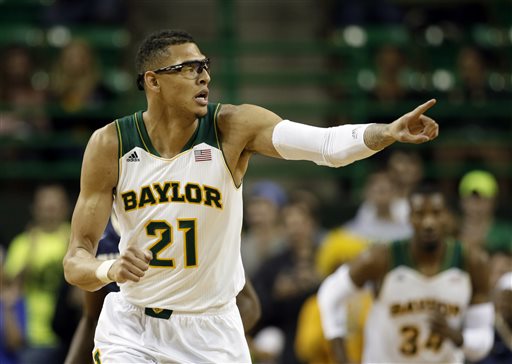 Isaiah Austin and the Bears have the talent and experience to get to the Final Four.

And Finally: Never pick Mountain West teams to do shit in March.

Yeah, San Diego State is still alive, and yes, they’re capable of beating Arizona, even though they probably won’t. But ughhh. Every damn year Mountain West teams ruin brackets with their Springtime ineptitude. Thanks for losing me money in back-to-back years, New Mexico. 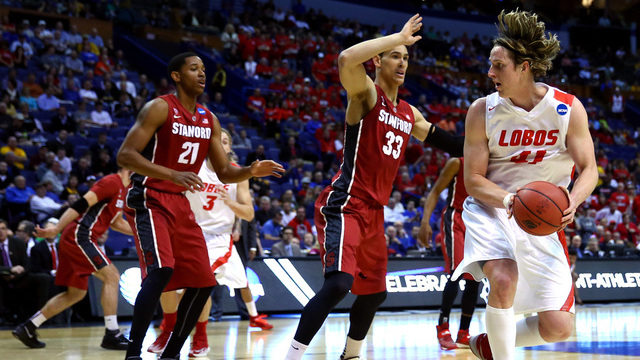 New Mexico lost to Stanford in what was the latest upset of a Mountain West team in round one.

So there you have it. Check back later this week for Sweet Sixteen predictions. And as always, feel free to argue with me in the comments!