One-fourth of the NFL’s 32 teams remain heading into this Sunday’s Divisional Playoff Games. The eight squads still vying for the right to be forever known as Super Bowl 50 Champions all have their flaws; perhaps more than any year in recent memory, there doesn’t seem to be a clear favorite in neither the AFC nor NFC.

Three of this weekend’s four games are rematches – only the Chiefs and Patriots will line up against each other for the first time – so we might have some idea of what to expect. But in the playoffs, things rarely play out as they did during the regular season.

With that said, here are my picks against the spread, and final predictions for this weekend’s NFL Divisional Playoffs. All lines are current from Vegas Insider as of 1/14. Home teams are in CAPS. 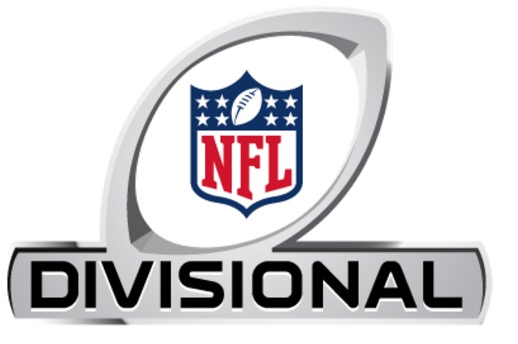 But to say Kansas City is on a roll would be underselling them immensely. The Chiefs have won 11 straight games. They made the playoffs despite a pitiful 1-5 start. They lost their best player – running back Jamaal Charles – in week 5, during a pathetic loss, at home, to a Chicago Bears team that would finish 6-10. After losing to the Vikings in week 6, something happened to the Chiefs and I’m still not sure what it is. But they haven’t lost since. Charles’ replacement-by-committee of Charcandrick West and Spencer Ware has become a force with which to be reckoned. Alex Smith is playing the best football of his career, especially with how effectively he’s been running the ball. Jeremy Maclin has given a moribund Chiefs’ receiving corps life (although he may not play this weekend). The defense has jelled and become the excellent unit they were once projected to be. The special teams broke the game open during last week’s throttling of Houston. Kansas City is firing on all cylinders and has looked downright unstoppable at times.

The Patriots’ trajectory this season has been a sort of inversion of the Chiefs’. New England started 10-0, with only a handful of close games. Talk of the Patriots repeating their 2007 undefeated regular season was the main focus of sports radio. Many took it as a foregone conclusion that New England would have another back-to-back Super Bowl Champions team to add to its 2000s dynasty. But then the Denver game happened, injuries caught up to the Pats, and their invincibility was gone in a second. Missing key contributors such as Gronk, Julian Edelman, Dion Lewis, and LeGarrette Blount (to name just a few) hurt the Patriots severely on offense, and the defense just doesn’t have stars that can win games on their own. The Patriots limped to a 2-4 record in their last six games, failing at every opportunity to secure the #1 seed in the AFC despite the Broncos and Bengals keeping the door open until the final week. Losing to the Broncos was understandable. Losing to the Eagles, Jets, and Dolphins was much less so. The good news for the Patriots is that they’ll have Gronkowski and Edelman on the field this Saturday, the first time both players have suited up since late October.

However, I don’t think having Tom Brady’s two favorite pass-catchers will be enough to stop the Kansas City machine. Even after that awful start to the year, KC ranks 9th in pass defense, and it’s extremely unlikely the Patriots will get anything going in the ground game with a rushing “attack” that is 30th on the year, and is averaging just 78 yards per game during this 2-4 stretch. The Chiefs should be able to run the ball, win the time of possession battle, and win the game, even in New England. 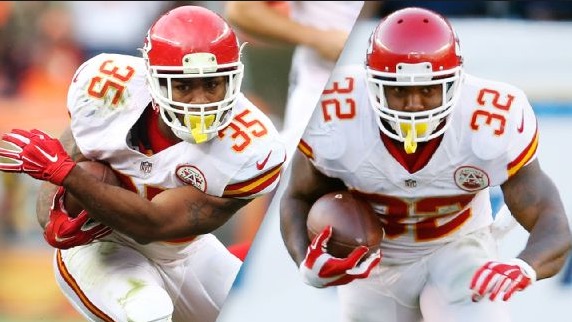 Running backs Charcandrick West and Spencer Ware have stepped up big for the Chiefs.

Two weeks ago, if you’d given me this matchup, I probably would have taken Arizona at -50. That’s how much better the Cardinals were looking than the Packers. However, with the events of week 17 and Wild Card Weekend, I think 7 is a pretty accurate spread for this game, and this is a challenging pick. Are we going to see the Arizona team from week 17 or the Arizona team that rolled off 9 straight wins and looked dominant before that? Are we going to see the dominant early-season Packers, the atrocious late-season Packers, or the seemingly revitalized Packers from last week’s Wild Card win over the Redskins?

First, the Cardinals. If you’d asked me two weeks ago who I thought the Super Bowl Champions would be, my answer would have been Arizona, and there wasn’t a close second. I still think Arizona is the most dangerous team remaining, and I still love their odds of winning it all. However, week 17 against Seattle changed my feelings about the Cards a little bit…especially after watching Seattle look so awful against the Vikings in their extremely lucky escape last week. Arizona hasn’t played well against Seattle in Phoenix in years, but fortunately, they may not have to deal with that matchup at all – and certainly not this week against the Packers.

Oh yeah, the Packers. If what Seattle did to Arizona in week 17 was ugly, the absolute smackdown the Cardinals laid on the Packers in week 16 was hideous. The Cardinals led the Packers 31-0 not even 5 minutes into the third quarter before letting off the throttle and coasting to a humbling 38-8 victory. Sure, the Packers looked good last week against the Redskins, but the Cardinals are not the Redskins – they’re much better on defense and have many more weapons on offense. In a year in which the Packers struggled mightily on offense without Jordy Nelson, even with Aaron Rodgers starting every game, I can’t see them going into Arizona 2 weeks after getting destroyed and coming out with a victory. Packers make it closer than last time, but Arizona advances convincingly. 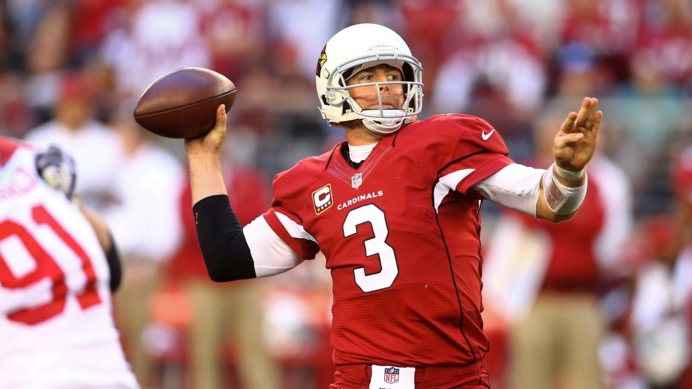 With a healthy Carson Palmer, the Cardinals have dominated on offense and defense this year.

This is by far the hardest game to pick this weekend, both in my opinion and in the opinion of Las Vegas. That’s because neither team here has a clear advantage whatsoever. Way back in week 5, the Panthers edged the Seahawks in Seattle, 27-23. Of course, at that time Seattle wasn’t playing nearly as well they did for the second half of the season.

But then, there’s that ugly, atrocious, incredibly lucky win the Seahawks just eked out against the Minnesota Vikings. Let’s be honest – Seattle had no business winning that game. Their offense was dead in the water for 90% of the game. When they finally took a late lead, their defense – and much-ballyhooed safety Kam Chancellor, in particular – choked the game away, allowing the anemic Vikings pass offense move the ball down the field to the Seahawks’ 10-yard line, where the Vikings should have won with a gimme of a field goal. Of course, that’s not the way things played out, as Vikings’ kicker Blair Walsh had the worst field goal attempt in recent playoff history, and Seattle held on. As bad as the Seahawks looked last weekend, they had been extremely impressive for about two months before that, with Russell Wilson taking a major step forward and setting the league on fire with absurdly efficient passing and gaudy statistics – a nice complement to the always-fearsome Seattle defense.

Meanwhile, everyone knows the Panthers’ story this year, as the team was able to go 14-0, threatening history, before finishing 15-1. This is a Panthers team that wasn’t expected to do much this year, either. Sure, Carolina “won” the NFC South last year with a 6-8-1 record, but nobody saw this coming. A big part of the Panthers’ unprecedented success is due to the meteoric rise of presumptive MVP Cam Newton. Cam had always been good, but this year he became one of the league’s greats, carrying a team with no real receiving threats and mediocre running backs to a 15-1 record. Cam was the most impressive player in the league this year, and Carolina will go as far as he takes them. And I think he will take them jussssst far enough to get past Seattle’s recent extreme luck in the playoffs. 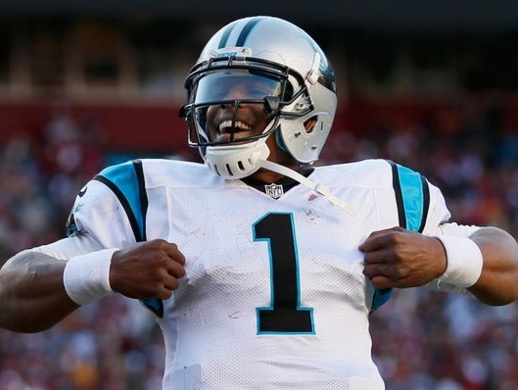 Cam Newton has truly played like Superman this season.

To be clear, I think the Broncos win this game. But I don’t think they win it by 7 or more, and I expect the line to get bet down a little before Sunday afternoon, with the expectation that Ben Roethlisberger and Antonio Brown are both going to play.

The Steelers beat the Broncos in Pittsburgh less than a month ago, 34-27, despite trailing by 14 at the half. Pittsburgh won behind the strength of a 21-0 second half – a troubling development for the Brock Osweiler-led Broncos offense, which coughed up a big halftime lead for the second straight game. The Steelers victory was due in a large part to Antonio Brown, as the star receiver had 16 catches for 189 yards and 2 touchdowns, causing problems for the Broncos’ NFL-leading defense all day long. If Pittsburgh is to win again, the Steelers will need to make sure Brown and Roethlisberger are healthy and ready to go after getting injured last week, and they’ll need to get the connection between the two going early and often.

The Broncos, meanwhile, are arguably the biggest enigma remaining in the field. The defense is who its been all season – the NFL’s best defense. The Broncos are #1 in pass defense, #3 in rush defense, #1 in yards allowed per game, #4 in points allowed per game, and #1 in total defense. There is no vulnerability in this defensive unit, which is finally getting completely healthy at the right time. To see why Denver is such an enigma, one needs to look no further than the quarterback position, which is unusual for a team quarterbacked by Peyton Manning. We will find out very quickly whether Peyton is fully healthy, and if he’s back to his old, Hall-of-Fame self. The porous Pittsburgh pass defense, ranked 30th in the league, should be the perfect matchup for Peyton to get back into the swing of things. 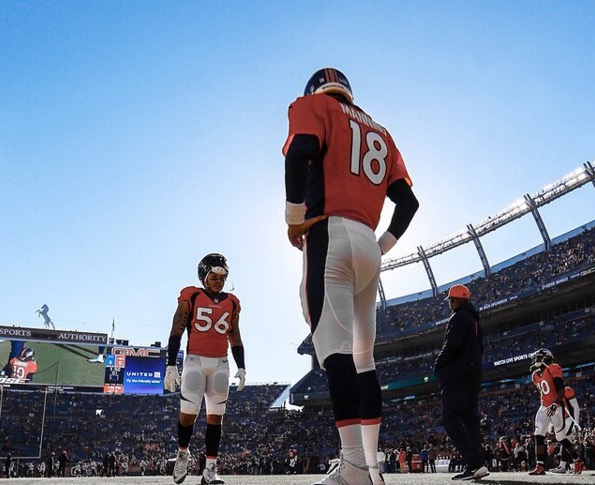 Can Peyton Manning silence his doubters against Pittsburgh?