Posted On January 14, 2015 By Ryan Daugherty In Sports, Sports Takes

An Outrageously Early, Position By Position Preview of the Baylor Bears 2015 Football Season

For the second consecutive season, the Baylor Bears have suffered heartbreak after having their best season in program history. After giving up a 20 point lead in the 4th quarter to Michigan State, the Bears enter the 2015 season as a long shot to replicate the past two seasons.

Last season was most likely Baylor’s best shot at winning a bowl as big as the Cotton Bowl. They had it won. The trophy was theirs. But yet again, discipline came into play as the Bears made every possible mistake they could to lose. Now they head into a “new era” of Baylor football, as Bryce Petty and every player from the 2011 team which started this improbable run is gone.

While at the moment it is easy to feel reluctant about Baylor being a National Title contender for a third straight year, the Bears have an opportunity to be even better in 2015. Baylor will lose Petty, WR Antwan Goodley, LB Bryce Hager, and K Spencer Roth, but they will be returning most of their starters on both sides of the ball, 18 of 22 to be exact.

Obviously the biggest positional loss comes at the quarterback position, but you have to remember this is Baylor, the best offensive system in college football. Quarterbacks flourish in it. Seth Russell (JR) is the heavy favorite to start next season after making the most of his opportunities in 2014. Russell appeared in eight games in 2014, throwing for 804 yards and 8 touchdowns to only 1 interception. In his only start, he threw for five touchdowns (all in one half) and 438 yards. While this came against Northwestern State, there is reason to be optimistic about Russell. He can air the ball out and brings another dynamic with his ability to run the ball.

Russell won’t be alone in the position battle however. The Bears landed possibly their best recruit in program history when 5-star QB Jarrett Stidham (FR) decommitted from Texas Tech and transferred to Baylor. Stidham could potentially be a Heisman candidate in Baylor’s high powered offense in a few years, but he will most likely spend a year or two learning the ropes. The scary thing though is Stidham is talented enough to start from day one. The battle between Russell and Stidham will be something to watch all offseason, but as long as Art Briles is running the show, the Bears will always be set at quarterback. 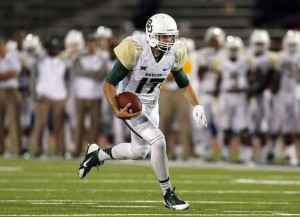 In 2014 the Bears ranked second in the Big 12 in rushing with 215.5 ypg. If new Offensive Coordinator Kendall Briles sticks with the running scheme, the Bears should be even better in 2015. Shock Linwood (JR), Devin Chafin (JR), and Johnny Jefferson (SO) are all returning. They will also have Terence Williams (RS-FR) who is a bigger back at 6’2 225 lbs, and freshman 4-star JaMychal Hasty (FR).

Williams and Hasty most likely won’t get much burn in 2015, but they are sure to be vital parts in the next few years. Linwood figures to be the starter again, but Chafin will get just as many carries as a power back with sneaky speed. Jefferson will look to get more opportunities as the most explosive back out of the three. Baylor will be licking its chops with a fantastic trio of running backs and two 4-stars fighting for depth chart carries.

This is the position where Baylor will be nationally dominant year in year out. The Bears lost Antwan Goodley, Levi Norwood, and Clay Fuller, but will almost certainly be significantly better in 2015. Early starters look to be Corey Coleman (JR) and Jay Lee (SR) on the outside. K.D. Cannon (SO), who will be nationally admired in 2015, will start as an inside receiver while Lynx Hawthorne (JR) could have the early lead on the other inside slot.

The Bears 2015 depth is just as talented as in recent years. Davion Hall (SO) could very well take over Lee or Hawthorne’s spot with his 6’2 frame. Ishmael Zamora (RS-FR) and Chris Platt (RS-FR) will get into the mix along with blue chip 4-star Blake Lynch (FR), who could very well be a big factor.

Talent-wise, this may be the deepest the Bears have ever been at wide receiver. In Kendall Briles’s OC debut in the Cotton Bowl, the Bears offense almost resembled the air raid attack for much of the game. If Briles looks to make Baylor an even heavier passing team next season, records could be broken. 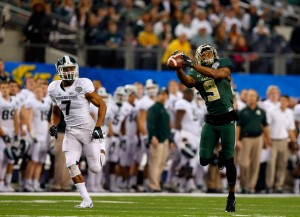 As a side note, after former receiver Josh Gordon, there hasn’t been a more talented Baylor receiver than Cannon in a long time. Cannon does have to work on not dropping the ball, and it would be nice to see him improve his route running, but he is as talented as any receiver in the nation. He is a smaller Dez Bryant. My bold prediction for 2015 is that K.D. Cannon wins the Biletnikoff Award as the best wide receiver in the nation. Just wait America.

The Bears will return four of their five starting offensive lineman with LT Spencer Drango returning for his senior season. Baylor basically runs with six offensive lineman though, as they use their tight ends for blocking nearly 100% of the time. With TE Tre’Von Armstead (SO) returning, Baylor will have almost full continuity up front. As of now, the starters from left to right figure to be Drango, Blake Muir (SR), Kyle Fuller (JR), Desmine Hilliard (JR), and Pat Colbert (SR) replacing Troy Baker.

The biggest reason why Baylor improved drastically on the defensive end of the ball is due to their dominant defensive line. The Bears are returning every defensive lineman, and received huge news when DE Shawn Oakman (SR) announced he would return for his senior season. Last season, Baylor lost DE Jamal Palmer (SR) to an ACL tear, but found a viable replacement in K.J. Smith (SO). Now Baylor gets to add Palmer back to the mix. Palmer will most likely start on the left side of the line with 6’9 Oakman opposite of him on the right side. Smith and Brian Nance (SO) figure to be the primary backups.

In the middle, Beau Blackshear (SR) and Andrew Billings (JR), who is undoubtedly the Bears best defensive player, solidify the line. Byron Bonds (JR) and JaVonte Magee (JR) will back them up. Magee is a wild card for the Bears in 2015, as he is one of Baylor’s highly touted defensive recruits in recent memory. Expect Magee to challenge Blackshear and even Palmer on the end for a starting spot. 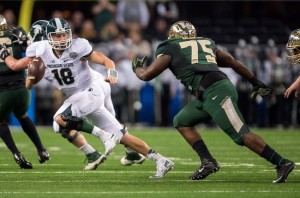 The linebacker position will be an interesting one to watch next season. Baylor is losing its defensive leader in Bryce Hager which is a big blow, and they are losing walk-on NB Collin Brence, but they have far more athletic linebackers to fill in their roles. The most likely candidate to fill Hager’s role is Grant Campbell (SR) who played well on the special teams unit. Travon Blanchard (SO) will most likely take over the nickelback duties which should be a major upgrade athletically. The other linebacker spot is virtually a lock for Taylor Young (SO) who took over for Aievion Edwards (JR) in the middle of the season. Young played exceptional, posting 80 tackles and 4 sacks. He was awarded the Big 12 Newcomer of the Year as well.

Edwards will backup Young and Campbell, and have a chance to reclaim his starting spot while Xavier Phillips (RS-FR) will fight for playing time. Patrick Levels (JR) and Cordell Dorsey (RS-FR) will battle Blanchard for the starting nickelback spot.

The potential is there with this new linebacker group, but there is a lot of work that needs to be done to replace Hager. Linebacker coverage should be much better with the athletes on the field, but it is a position which should be monitored all season long.

If there is one thing that holds Baylor back from being a legit powerhouse in college football, it is their secondary. The Bears had an atrocious secondary in 2014, and that’s putting it lightly. If it weren’t for the defensive line generating so much pressure, Baylor’s defense could have been giving up far more points a game. Every single player in the secondary is returning, and if there is anything positive to take out of it, they are all one year more experienced.

Xavien Howard (JR), who was the only cornerback to show any kind of consistency in 2014 will hold down one of the corner spots while the other spot should be wide open. Ryan Reid (JR) probably has the early lead, but Tion Wright (JR) and Terrence Singleton (JR) will have every opportunity to start. J.W. Ketchum (FR) might play wide receiver, but there is a great chance he will be played as a cornerback. He is a talented and quite confident kid who could very well be starting once the season begins, but until then no one is guaranteed a spot.

The safety spots will both return with Orion Stewart (SR) and Terrell Burt (JR) starting. Stewart still has a lot of room for improvement, but he should be the daily starter as the deep safety. Burt on the other hand will have the most to prove out of any defensive player. Burt was the player which teams picked on the most in the passing game last season. He will have a whole off season to improve and he should have a chip on his shoulder from his play last year. A big part of the defense next season will be figuring out how to cover receivers, especially Burt.

Backing up Stewart and Burt will be Alfred Pullom (RS-FR), who replaced an injured Burt in the Texas Tech game, and looked solid doing so, Taion Sells (SO), and Chance Waz (FR). Burt is the starter for now, but he should keep an eye out for one of these three backups, especially Pullom.

Special Teams is especially something that Art Briles & company need to solidify. Far too many times were teams starting from their own 35 and 40 yard lines. Chris Callahan (SO) is returning after a strong finish to his shaky season. Callahan hit 18 of 26 field goals last season, and hit all eight of his attempts under 30 yards. However, he only made 10 of 17 field goal attempts over 30 yards. Callahan’s job is safe, but freshman Drew Galitz (FR) could make a run for the job this off-season.

Losing Spencer Roth, one of the best punters in the Big 12 and arguably the nation was a huge loss, and Baylor will have trouble replacing him. Kyle Peterson (SR) is the likely candidate to take over punting duties. Spencer Evans (SO) returns as the placekicker as well.

The special teams unit can improve, and Galitz could in fact be a nice find for the Bears, but unless the players can improve their tackling, expect the unit to take a significant hit. Peterson is going to have prove his leg as well.

Aside from losing their Heisman candidate, the Baylor Bears will be much better talent wise, offensively and defensively. We will have to wait to continue the incredible ride, but the fact is the Bears definitely have the talent to exceed expectations and shock the world – again.