Posted On June 16, 2014 By Allyson Darling In Miscellaneous, Ramblings

In honor of father’s day this past weekend, I spent some time reflecting on the invaluable lessons you have taught me in a quarter century.  You have owned some version of a beard or a mustache for nearly my whole life, which admittedly and Freudian-ly may be why I am only attracted to men with some sort of facial fur.  You posses the innate ability to tell a joke with such sincerity that you gain instant belief from your victims.  You have never been known to turn down a drink with the ones you love, whether that is brown-bagging it in front of the Painted Ladies in San Francisco, making mojitos on Easter Sunday, or drinking wine with me and entire four seasons of The OC.  You are part of the old-fashioned breed of man that builds things and fixes things and as hard as I try, I can never develop feelings for delicate and feminine men because of this (this makes dating in San Francisco difficult, by the way).  You are one of the most infuriating and hilarious people I know and through the years, farts and raising four children I have learned a lot from you, but these are most telling teachings. 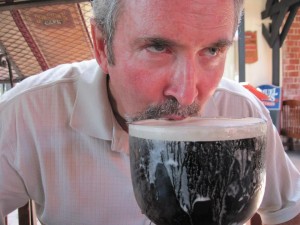 This came from the man who had four children by the time he was in his early thirties. Most parents would be tickled at the possibility of having grandchildren, but you have always encouraged me to be successful and do what I love before that happens. My eggs may be dusty and defective by the time this happens, and I may have to adopt an international baby or seventeen cats, but I will write a book before I am changing diapers.

You taught me how to do this early on in life, from weekend camping adventures where peeing in the woods was the only option.  It has been useful in diverse situations, from evenings of intoxication where the potential for urination in an alley is likely, to living in Thailand and permanently peeing in a squat toilet for six months. This is something that has come in handy more than you know.

I may not agree with your views on guns and your collection of them in your closet, but you did teach me how to shoot one at the border of Mexico when I was twelve.  You bought me a fancy pocket knife with my name engraved on it for my twenty-fifth birthday that has served as a scare tactic to any man who finds himself in my bed, since it resides under my guest pillow.

When your four children left the house and moved on to college and post-college life, you took on a new project in our urban neighborhood, and backyard more specifically.  You built a chicken coop and purchased baby chicks that you would raise for the purpose of fresh eggs.  To make up for the empty nest syndrome that had wiped out The Darling household, you named them after your four children who had metaphorically flown the coop.  After receiving daily photographs of “Allyson” the chicken, statistics on her daily well being and affinity for eating dog feces, I knew it was time to make a visit home.

5 Complaints About ‘Star Wars: The Force Awakens’ and Why They’re Stupid