Posted On July 18, 2014 By Cat Hausler In Artist Interviews, Music

I arrive at the Hotel Teatro around 8 p.m. and the sun is just setting. Colorado’s elusive summertime is finally here, so it’s still incredibly hot. I’m a bit flustered and flushed, but it isn’t due to the temperature. This will be my fourth DJ interview, and yet, I’m anxious, knowing that I’m about to chat with one of the biggest up and coming DJ duos in the industry right now.

GTA or “Good Times Ahead,” is made up of Miami natives Julio Mejia and Matt Toth. Funnily enough, Mejia and Toth were introduced on Facebook. They started messaging, met up, and the rest is history. Things have gone from zero to sixty for the pair who has played some of the biggest EDM festivals in the country (Coachella, Ultra and EDC Las Vegas) in the last year and collaborated with Diplo on the dance hit “Boy oh Boy.” And their latest single “Hard House” is already seeing heavy play.

I’ve listened to their EDC set pretty much on repeat since it was posted on SoundCloud and I’ve watched the video they put together of their time at the Las Vegas festival— both convey a wild trip, to say the least. So I almost expect their hotel room to be in a state of party. But instead, when the door opens, I find two polite, well-spoken guys, passionate about what they do, ready to break any and all stereotypes people may have about dance music. 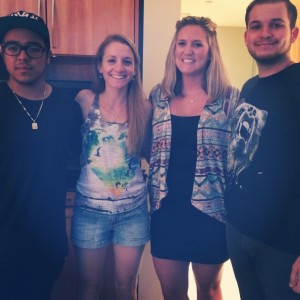 Cat: I’m always interested to know how DJs settle on their names… GTA stands for “Good Times Ahead,” what brought you to that name?

Matt: It was originally “Grand Theft Audio,” but we didn’t want to have any association with the game [Grand Theft Auto]. So we were going back and forth. At the time we were talking with Laidback Luke and he suggested just “GTA.” And We thought, ‘oh man, that’s a cool idea!’ So we just ran with it. And then after a while we knew we should come up with an actual meaning for the acronym and it was just “Good Times Ahead.” And that just felt so right.

Cat: You play a wide variety of genres in your sets – who would you say are some of your biggest musical influences?

Matt: We listen to all kinds of stuff. I was listening to trance for a while, I liked Arty—he has some really cool stuff. Mat Zo. Recently I like Porter Robinson’s new stuff.

A lot of hip hop stuff, but we also grew up listening to salsas records since we’re from Miami. And we really love that.

Cat: Your single “Hard House” recently came out – tell me the story behind that song.

Julio: It was pretty much an idea that our friend from Dallas, Juyan Sebulba, sent over. And we loved the melody. So while we were on the Rihanna tour last year, we just tried a trap idea with it and it actually sounded really crazy, super hyped. So we decided to collaborate on it with him. And it ended up being one of the biggest records in our sets.

Cat: The word “trap” keeps coming up and I think many people would jump to label your music as “trap,” but you guys live by the mantra: death to genres. Tell me about that.

Matt: It came to be because it’s what we feel. People shouldn’t try to label someone as one genre and pigeon hole them into one thing. We grew up listening to all kinds of music, no matter what it was—hip hop, rock, metal, salsa, whatever. We just really loved all of it. We want to get people away from thinking that we can only make one type of music.

Cat: Your new album is also called “Death to Genres.” What can we expect from it?

Matt: Yes. Actually, just now we’re finishing up the collab with Martin Solveig. We have other collaborations with Skrillex, Flosstradamus, Diplo— we’re doing a lot of different stuff.

Cat: Speaking of collaborations- one of your first big tracks was “Boy Oh Boy” with Diplo. What was it like working with him?

Matt: it was really fun. Just as you see on his twitter and his instagram and all that, he’s just a very crazy, weird guy. Weird in a good way, ya know? It’s really fun working with him. Just to see that he’s kind of all over the place, he has so many ideas. And it’s non-stop craziness.

Julio: He’s really creative too. He has a bunch of really cool ideas and we’re also influenced by him. So just being in the studio with him was a cool moment. Every time we get in there with him we try to bring our A game and come up with crazy stuff. He’s a cool dude and he always has good input.

Cat: Is there anyone that you haven’t collaborated with that you’d love to do something with?

Julio: Yellow Claw would be dope. Just Blaze too.

Cat: You recently played EDC Las Vegas – what was that experience like?

Matt: It was unreal. It was the biggest festival we’d ever been to. It was just mass chaos, but in a non-chaotic kind of way.

Julio: It was crazy too because we didn’t really expect for it to be so insane. We played at like 3:15 in the morning and we thought- “yeah right, nobody is going to come out. It’s the last day, everyone is gonna be super tired.”

Matt: But everyone was raging like crazy. There were at least 10,000 people at our set.

Cat: I’ve listened to the EDC set and think it’s awesome. We’re in the same age group and I love that you guys do a bunch of 90s and early 2000s throwbacks in your sets- like Nelly’s “Hot In Here.” Does that just come to you?

Julio: I just think about my 8th grade prom and what was cool.

Matt: Our EDC set was really special. We were so nervous. Sometimes for some of these bigger sets, we kind of plan it, but that set we completely had no idea what we were gonna do. So that was crazy.

Cat: The last year has been a big one for you- you’ve played Ultra, Coachella, EDC Las Vegas, etc., but you still have a string of high profile events in front of you- The Light in Las Vegas, Lollapalooza, Amnesia in Ibiza, TomorrowWorld… What can the world expect from GTA in the next few months?

Julio: A lot more music. We’ve been trying to tour a bit more lately, but at the same time, we’ve just been in the studio as much as we can. So in the next few months, you can expect a lot more releases. Jut like you said before, we had “Hard House,” which just came out, so we’re gonna try to follow that up with some cool stuff.

Cat: Many of our readers aren’t necessarily fans of dance music. What would you say to those people skeptical of listening to your music?

Julio: Yeah, we have a track for that too!

Matt: And if you want to remember your 8th grade prom, you should also listen to our music.

Cat: You guys have this whole “death to genres” thing, but how would you describe your sound?

Matt: I’d say it’s just an energy really. Every song that we pick that we play has a certain energy that just brings out an organic hype-ness.

Matt: There are different songs, different tempos, but they all have the same overall feeling. 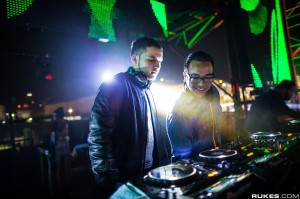 GTA’s set at Beta Nightclub following this interview was upbeat and all over the place in all the best ways. True to their mantra “Death to Genres,” they played everything from house to hip-hop to trap to rock. As I mentioned previously, the duo is on a pretty extensive tour right now, so see them when you can! Check them out on social media (the guys love interacting with fans on Twitter and Facebook) and be sure to give their latest single, “Hard House” with Juyen Sebulba, a listen here: