Posted On October 23, 2015 By Izzie Butler In Artist Interviews, Music

I was recently fortunate enough to be able to sit down with Erez Eisen of legendary Israeli psychedelic/electronic act Infected Mushroom at the Gothic Theater in Denver, CO. Erez comprises one half of the core of Infected Mushroom, along with Amit Duvdevani. The two have been performing together for almost 20 years, making new and entrancing music.

Both Erez and Amit had a deep love for music at a very young age. Erez is classically trained on the organ while Amit grew up playing the piano. As the two grew older, their love for music expanded – as did their instrumental range. The two have a very special presence on stage, one that is complimented by each other’s respective personalities. Erez is a quiet, calming presence, while Amit is much more energetic, which I believe adds to their performances.

Not only does this yin and yang duo create captivating music that gets everyone moving from in the studio – they also do an astounding 120 live shows per year! With so many live shows, Infected Mushroom is more than used to interacting with a crowd, but this performance had the potential to be very unique.  With their 2003 album “Converting Vegetarians” opening so many doors for the transformation of their later music, fans were excited to see how “Converting Vegetarians II” would complement it.

With the album release party for the “Almost Acoustic” Converting Vegetarians II about to begin, the energy at the Gothic Theater was one of excitement and anticipation. I was able to sit down with Erez just minutes before their set began to discuss what had gone into their love of music and producing this new album. 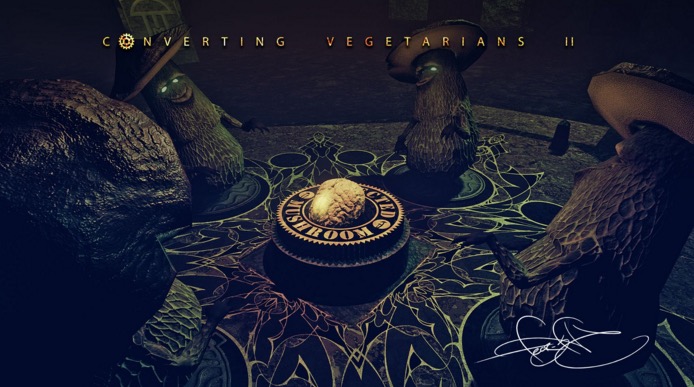 Izzie: “I know you were classically trained at a young age – what initially drew you to play music?”

Erez: “My parents. They pushed me to learn the organ, but at the time, I hated it. It wasn’t until later -when I started playing music that I liked – that I started loving music.”

Izzie: “Does anyone ever like to do what their parents tell them as a child? …But I bet you’re glad that they pushed you in that direction. What do you think made “Converting Vegetarians” such a success?

Erez: “It was much more involved than other albums we had done. I think it gave fans something that was new from us.”

Izzie: “How do you think the songs that were recorded in the studio will translate to all your live performances?”

Erez: “We have practiced a lot in the studio and I think that will make us prepared. But we also like to improvise a lot during the live shows. Hearing a song the exact same way it sounds on an album is not as exciting as mixing it up a little bit. We like to keep things new for the audience…and for ourselves.”

Izzie: “Are there any pre-show rituals that get you and Amit ready to perform?”

Izzie: “Sleep certainly is necessary; I know I am not at my best without enough sleep! Have there been any crazy stories while on the road that have kept you from getting enough sleep?”

Erez: “That really just depends on your definition of crazy. They are always “crazy” in someone’s terms…but there are a lot of nudity stories that I wont go into (laughs).”

Izzie: “HA! I guess that’s true! Now you knew this question was coming – what artists inspire you the most?”

Erez: “Honestly, it’s the younger generation of musicians. They are coming up with so many new ways to do things and creating so many new sounds – it is always keeping us on our toes; it constantly keeps us trying to be better and try new things. I always think it is amazing when we meet the younger generation of musicians and they say that they look up to us and all that we have been able to accomplish, but truly it is them who we look up to.” 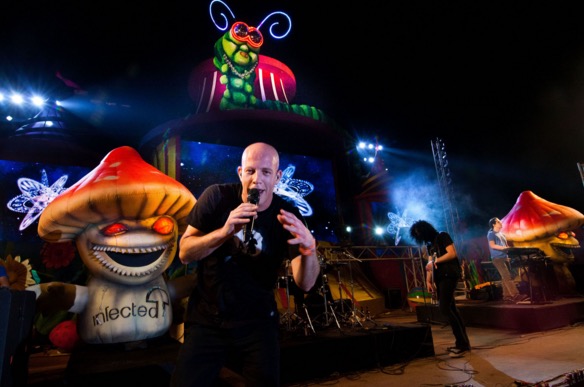 When Infected Mushroom’s set started, the crowd was silent. Everyone was excited to hear what else Infected Mushroom had in store for them. By the middle of the first song, there was not a stationary person in the whole theater. Infected Mushroom was able, once again, to bring a performance alive. For any of you who have not had the extreme pleasure of seeing this talented group perform, do yourself a favor and make your way to one of their almost-endless live shows!

You can purchase Infected Mushroom’s “Converting Vegetarians 2” here, but first, check out the first song on the album, “She Zoremet,” below!

Izzie is an outgoing individual who is always ready for life's next adventure. She enjoys learning and prides herself on finding others hidden talents. After graduating with a business degree in Marketing from the University of Tennessee, Izzie moved to Colorado to begin her professional life after college. Izzie has had a strong love for music since she was a young child and hopes to continue to grow that love through her life and professional career.