Posted On May 22, 2015 By Anthony Kozlowski In Artist Interviews, Music

In the early days of Writtalin–which admittedly isn’t that long ago since we’ve only been going strong for about a year and a half–I had the distinct pleasure of meeting one of alternative rock’s rising stars. On the idyllic tract of downtown Fullerton, Ryan Daly, Anthony Improgo and the rest of electoropop quartet Parade of Lights shook KROQ’s Locals Only Show like a firestorm. They were poised to take the alt nation by storm, owning the stage like a post-apocalyptic Walk the Moon or a sweeter pop answer to AWOLNATION. I even went so far as to name them an Artist to Watch in 2014.

Last year was certainly a springboard for the band. They released their Golden EP in late March and followed that up by touring with current buzz band X Ambassadors of then- “Jungle” and now- “Renegades” fame. They also popped their festival cherries, booking a showcase at the mammoth SXSW and making appearances at both Firefly and Bonnaroo. Their songs “Burn” and “Golden” also found their ways onto television sets worldwide, the first lent to promote Bose’ SoundLink Color and the latter providing a soundtrack for Bonds Australia.

It was quite a year for Parade of Lights, but 2015 is shaping up to be even bigger for Ryan and the band. “We’re about to see a lot of hard work pay off,” he admits. On June 2nd, their much anticipated first album Feeling Electric drops and not a moment too soon. Parade of Lights plan to embark on a summer tour with the aforementioned AWOLNATION and soon after will make their first festival appearance of 2015 at Life is Beautiful in Las Vegas.

It’s all forward momentum from here. And bolstered by the verve and bittersweet electro tang of their feature length debut, Parade of Lights sit poised to be one of the big breakout stories of the year.

It was a long journey to this point, but luckily I got a chance to catch up with Ryan last weekend before he and his band shoot into the stratosphere. We talked everything from the recording of the album, how much he owes to his influences and the destructive power of whiskey. 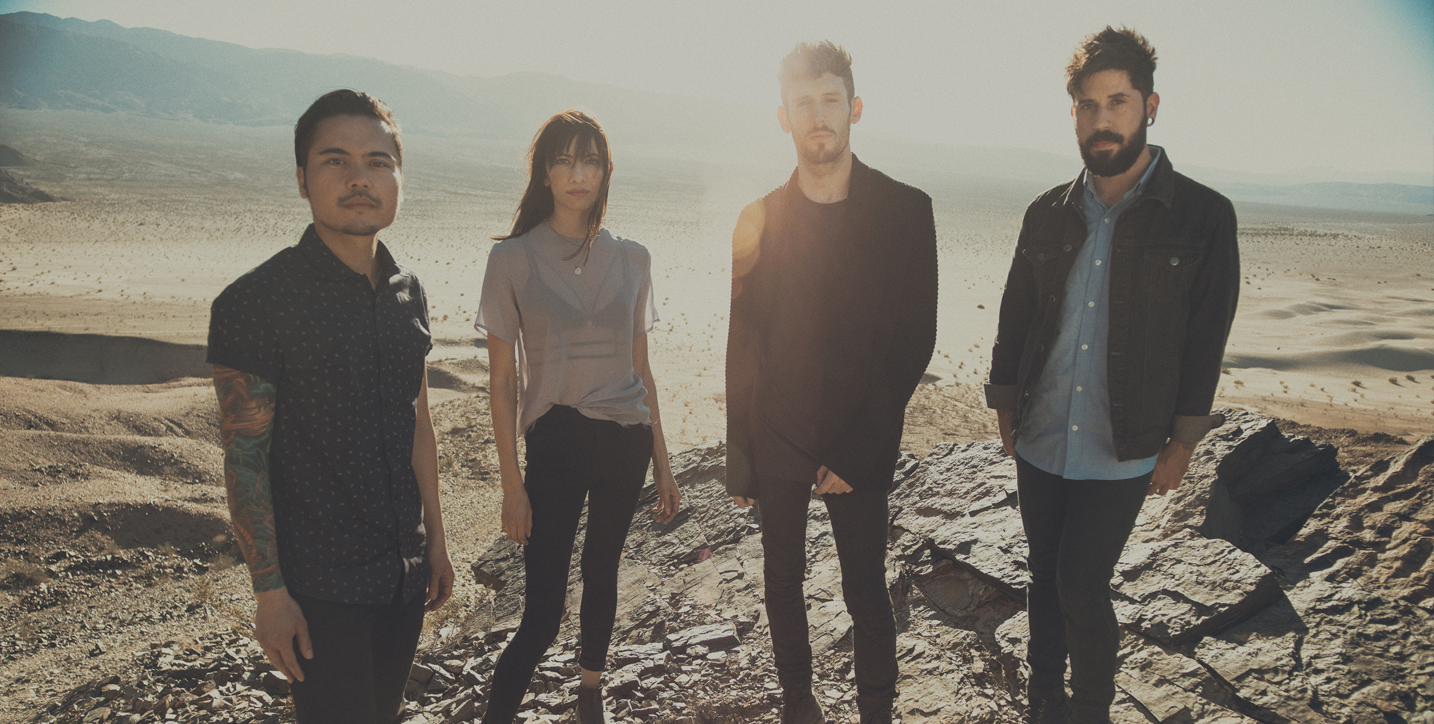 It’s been a while hasn’t it. What have you guys been up to since last we spoke?

A lot. Oh my gosh. What was that – over a year ago? That was right before we headed out on tour last. Basically when we had spoken to you, we had only released “We’re the Kids.” We were just leading up to the release of our Golden EP and our tour in support of it. We toured with X Ambassadors for a bit and when we got home we decided it was time to start recording a record.

At that point we had a bunch of festival dates booked, so instead of cancelling to do the album, we decided to hole up out in Nashville and record it there. When we had festival shows we would just drive to them, but we made Nashville our home base for a few months during the recording process. After it was done we came home and since then we’ve been doing shows, working on videos and just getting ready for the album release.

I recently got to hear an advanced copy of your new album Feeling Electric and let me just say that it sounds fantastic. It feels like the perfect progression from last year’s Golden. What did you guys seek to accomplish when you sat down to write the album?

Well, the funny thing is that we weren’t really planning to do an album, which was weird in itself because it almost came out of nowhere. We had a bunch of conversations about what we wanted to do after our tour and that seemed to be the one thing we all agreed on, so we just kind of went for it. We booked it for Nashville with pretty much zero songs in the bank and we just built it from the ground up. I think it was sort of cool because they materialized out of a completely different place than they usually did. Living on the coast and working on stuff out here in LA you kind of get in a creative funk after a while. It seems like a cliché, but changing your environment really does change the end result.

But overall we didn’t really set out with anything particular in mind. We just wanted to get out there and write the best songs that we could. Our mantra has always been that we want to write pop music with a lot of integrity. Not that there isn’t great pop music out there that’s massive, it’s just that sometimes it’s easy to get pigeonholed. So, we just made a record that is full of great songs and we hope that’s what people take away from it.

The lead single “Feeling Electric” is such a beautiful song. It has this grand sound and yet feels like such an intimate story. Can you tell me a bit how the song came together? What inspired it?

That was actually the only thing we kind of had written prior to getting in the studio to record. It wasn’t even written. The only thing we had there was that line “feeling electric” and a chord progression. From there it materialized slowly over the course of the tour. I remember being in the back of the van with a laptop and messing around with it to see what would happen. I showed Ant and he got excited about it and he and I bounced it back and forth on the way to Nashville, fleshing it out as much as possible. But oddly enough when we actually got to Nashville, it wasn’t on the docket as far as getting it completed.

The only reason we got around to it again was that I opened it accidentally during one of our sessions. None of us had heard it for a while, so it was like attacking it with a fresh set of ears. We were like, “Wait, this sounds really cool. Let’s see what we can do with it.” So we went at it and it became our first single and the title of the album in this roundabout sort of way. It’s odd that it took so much to create, but it’s a really great opening statement for the record.

I remember seeing an in-studio video about 6 months ago of “Feeling Electric” that was just the hook and the gospel singers and wanting so badly for it to be released.

Yeah, it took a while to finish everything and we were so busy that we didn’t update social media as much as we should have. We work really hard on doing everything ourselves and sometimes we get bogged down as far as updating Facebook. We’ll be at the grindstone for a week and then someone will be like “Oh yeah, we need to update Facebook and Instagram.” But on the other hand, we have to finish the record and play shows too so it’s a give and take. Multitasking can be brutal.

On the plus side, we have a ton of video footage and fun stuff from last year that you can expect to be blasted on social media over the next couple months.

Which albums did you have on heavy rotation during the writing of Feeling Electric?

I was listening to a lot of electronic music at the time and I know Anthony played a lot of Goldroom. We listened to a lot of that sort of stuff and kind of mined the textures that we liked and whether it’s a synth sound from here or a drum sample from there, we tried to bring all those elements together in the production process.

Talking about influences is a little difficult because we as artists don’t really use them in the songwriting process. That all comes from personal experience. When we sit down to write a song, it’s all about getting this intimate point that’s our own.

A great song can be played stripped down on an acoustic guitar or piano and it can still be as effective. That’s what we strive for before we bring in elements that we hear in other artists as far as treatment and production.

Any favorite tracks from the upcoming album?

That’s kind of like picking a favorite child, right?

If I were to talk about just one though, “Undefeatable” is a pretty powerful moment. Musically it’s very simple, but it’s also a universal message that anyone can resonate with. When you’re working on a record, you hear every song a thousand times and after a while you just want to take your hard drive and set it on fire. Even after all that frustration, I can still listen to “Undefeatable” and think “Okay, you did that one right.”

How does it feel to be sharing the bill with AWOLNATION on your upcoming tour?

It feels awesome. We’re really looking forward to it. We haven’t met Aaron Bruno or the rest of the band yet, but it’ll be a really great opportunity to get to know them. We’re big fans.

What’s the plan for Parade of Lights once your tour wraps up in July?

More touring, more shows. We really have to be playing live to get the music out there. We don’t have anything announced just yet, but big things are coming soon, so keep an eye out for that.

When can we expect to see you live on the West Coast?

We have a show at the Slidebar in Fullerton on June 9th, but aside from that our focus has been on more national shows. We play in LA a lot, so it’s great to get out there and meet fans all across the country.

Our only either semi-West Coast date that we have planned so far is in Arizona on our way out to link up with AWOLNATION. We’ll be playing with the band Kitten if you’ve heard of them.

Oh, I’m a big fan of Kitten. They always have a lot of energy at their shows.

Yeah, we played with them a couple years ago and Chloe’s just a mad woman. It’ll be pretty awesome to perform with them again.

If Parade of Lights could rescore any existing movie, which would you guys choose?

That’s hard to answer because the movies that I really like that I would rescore are the ones that I love the existing soundtrack of. But in terms of movies that I think are awesome and that it would be rad to write music for, I’d have to go with Solaris or Blade Runner. Really any sort of space or barren wasteland movies. Even barren space wasteland movies. That’d be sweet. Just write something really 80’s since we already write a lot of 80’s influences into our music as far as sound goes.

If Parade of Lights were a drink, what would you be?

Probably whiskey on the rocks with two lemons. We get a little rowdy when we drink whiskey. 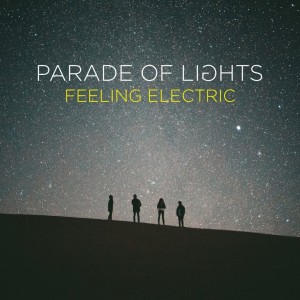 “Feeling Electric” is due June 2nd on Astralwerks records.

Don’t forget to check out Parade of Lights on tour this summer with AWOLNATION and be sure to pick up an advance copy of “Feeling Electric” on iTunes or Google Play.