Entering its fourth year in existence at the Denver Convention Center, Decadence NYE is embarking on what may be its best run yet. Last year’s lineup boasted some of the biggest names in dance music (Tiesto, Dada Life, and Above and Beyond to name a few), but the Decadence organizers have done it again. The 2014 lineup is star-studded and offers a variety of sounds for dance music fans. With festival-headlining names like Zedd and Kaskade, Grammy-nominated Disclosure, and Colorado favorites Bassnectar and Big Gigantic, Decadence 2014 is surely the EDM festival to be at this New Year’s Eve. 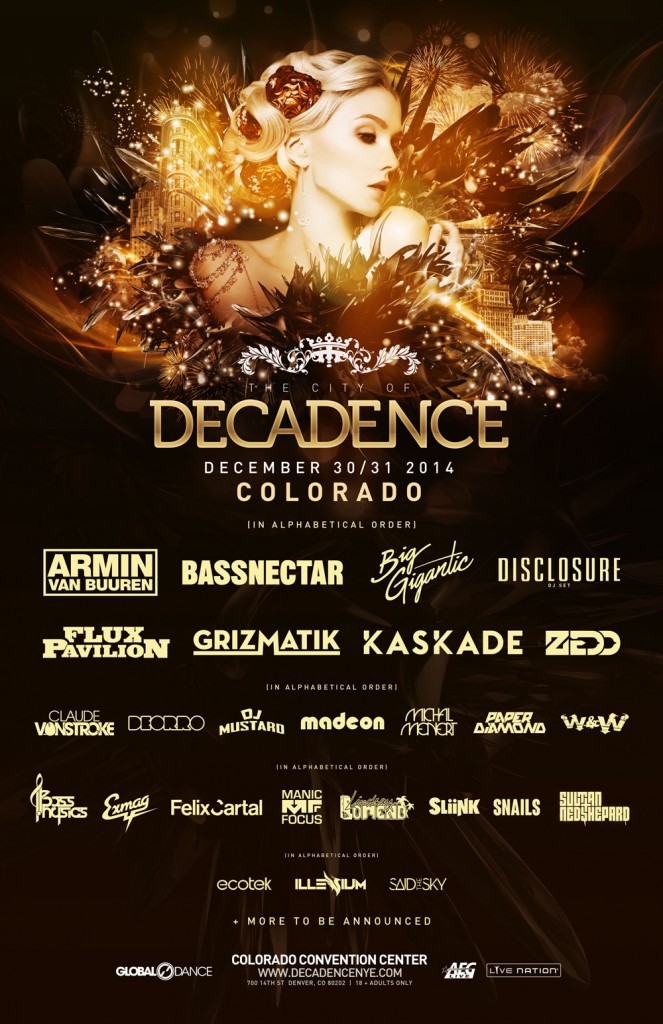 With the stacked lineup this year, it’s hard to choose the must-see artists, but here are the acts you cannot miss. However, because the venue is relatively compact, don’t worry about hopping from set to set.

W&W
Though relatively unknown in comparison to Zedd or Armin van Buuren, W&W has been making waves in the dance scene, especially over the last year. The Dutch duo made the 2014 festival circuit and collaborated with the likes of EDM royalty Hardwell and Like Mike & Demitri Vegas. Sure to spin an upbeat “dance til you drop” set, W&W is not to be missed at Decadence.

Disclosure
Guy and Howard Lawrence, also known as electro group Disclosure, are at the top of their game right now. With the help of vocals from Sam Smith, their single “Latch” has flown to the top of the charts and helped them to be Grammy-nominated. Disclosure is part of a new face of EDM that mixes live music with electronic beats and offers a truly unique sound. Though Disclosure’s set will be less energy-filled than some at Decadence, it will keep you engaged and wanting more.

Zedd
German DJ Zedd is arguably the biggest producer in the game right now. After the wild success of “Clarity” in 2013, Zedd has continued to move up in the dance scene. Though only 25, Zedd has played every major festival in the world and produced with some of the biggest names in music, bridging a number of genres. No stranger to Denver, Zedd previously headlined the third night of Global Dance Festival at Red Rocks in July 2014 and did not disappoint. The DJ throws down high-energy sets that play everything from house to rap to rock and back again.

Madeon
Madeon has been receiving attention since releasing his remix of Deadmau5’s “Raise your Weapon” at the tender age of 17. The French producer has continued to defy his age, putting out music with a distinct sound. Recently, Madeon released “You’re On” (feat. Kyan), a single that will accompany his debut album “Adventure,” due out in 2015. Madeon also performed at Global Dance Festival and is sure to play a varied set with lots of musicality.

Deorro
Deorro has made multiple statements this year about how he will be “quitting” DJing to spend more time with family, so catch him while you can. If he does “retire” soon, it will truly be a loss for dance music because Deorro has really hit his stride over the last year. Full of synths, huge build-ups, and drops, Deorro’s music delivers a jump-around sound that is sure to get your 2015 started off with a bang.

Kaskade
Kaskade is one of the most-loved producers in dance music. In the dance scene since the early 2000s, Kaskade has defined his sound and built a devoted following. The American producer not only headlines festivals, but also continues to create tons of original music. His most recent album “Atmosphere” was widely well received, featuring chart-topping singles like “Atmosphere” and “Last Chance.” In early November, Kaskade released “A Little More” (feat. Sansa) with John Dahlback. If “A Little More” is any indication of what’s to come from Kaskade in 2015, then it is sure to be another big year for him.

Honorable Mentions:
Really, the whole lineup at this year’s Decadence is not to be missed, but be sure to make it to at least parts of Armin van Buuren, and Bassnectar on night one, and Felix Cartal, Big Giganti,c and Flux Pavillion on the 31st.