Posted On August 26, 2015 By Brian Wray In Artist Interviews, Music

At 19 years of age, most of us have no idea what we want to do for our weekend, let alone a career. And virtually none of us are traveling the world performing music.

In the ever-populating suburb of Temecula, CA, lives a teenager who is already turning these ambitions into reality. Welcome to the life of Hunter Pea. The talented guitarist might be young, but he has the musical IQ of a person twice his age, and a drive for success that some people never attain.

Since his early days of youth, Hunter has been a music aficionado. Being that he is an expert of all things classic rock and metal, his greatest influence is Metallica… “They are definitely number one for me.” Not a bad inspiration to have considering his instrument of choice.

Hunter started playing the guitar when he was 11, and it’s been a permanent fixture in his life ever since. On an average day, he’ll practice anywhere from 2 to 4 hours. But if he’s prepping for a gig? “Usually all day… It helps me feel more relaxed for the show.” And shows are this man’s life. 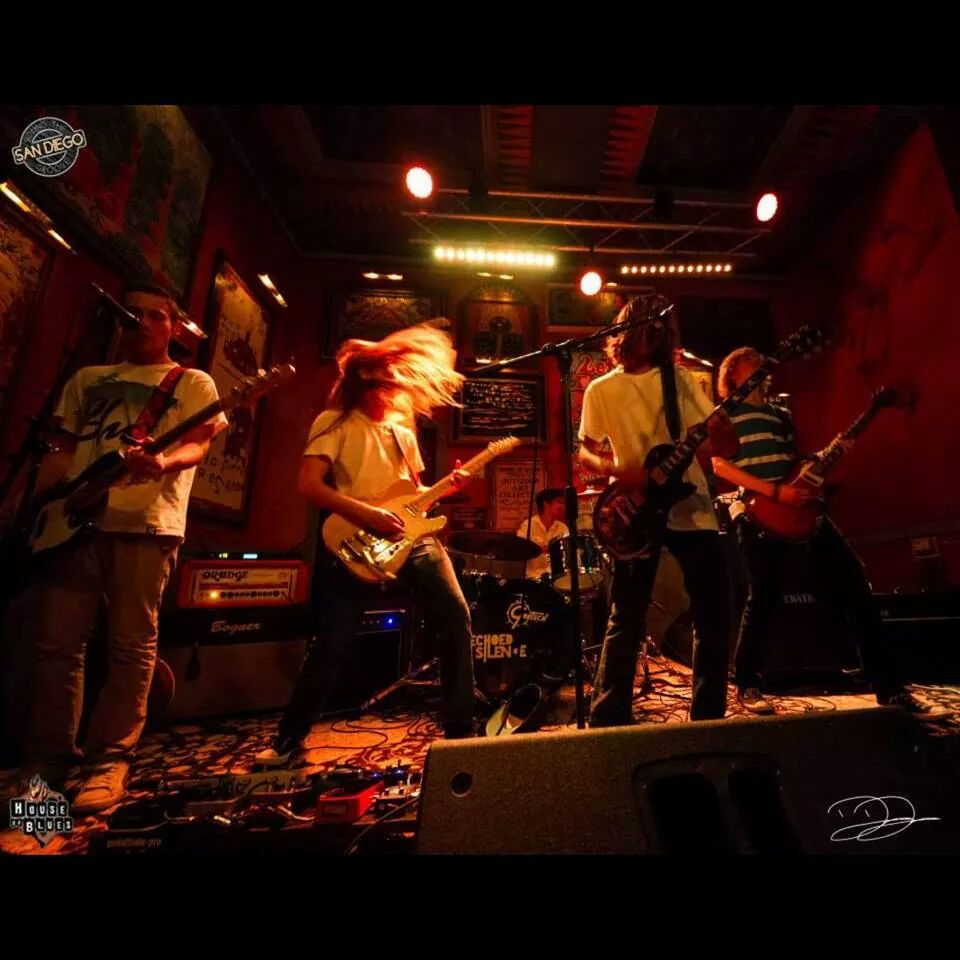 One of his earliest exposures to live performance came when he was invited to become the third guitarist in the band Echoed Silence. This allowed him a chance to perform at the world famous Whiskey A Go-Go in West Hollywood, where the group appeared on the same bill as Puddle of Mudd.

Hunter: “At the time, it was one of the biggest shows I’d ever had. It was nice to be able to get out of the bars and play at such a major venue… And being a fan of Puddle of Mudd, it was cool to watch them perform afterwards.”

In order to help Echoed Silence finance their studio album, Hunter started hosting open mic nights every Wednesday at The Shamrock Irish Pub and Eatery in Murrieta, CA, where he remains the host to this day. The weekly gig gives him an opportunity to earn extra income. But mostly importantly, it allows him to build upon his live performance skill set. As someone who’s seen Hunter perform on multiple occasions, I can honestly compare his melodic blues play to that of Eric Clapton, and his hard rock tenacity to that of Slash. But I’m not alone in this praise.

Recently, Pea’s ability was noticed by YouTube sensation Macy Kate. After seeing him play guitar live, she made him a member of her band.

In case you haven’t heard of Macy, she rose to fame through her interpretation of the Imagine Dragons hit single, “Radioactive.”

Working with Macy has been a blessing for Hunter, opening the door to a plethora of one-of-a-kind opportunities. In the summer of 2015 alone, he’s played numerous shows across the nation on the ‘Vans Warped Tour,’ as well as performing in Manila, Philippines for ‘YouTube FanFest’ in June.

Hunter: “If I can do more stuff like ‘Youtube FanFest,’ I’ll be a very happy man… The Marriott Grand Ballroom [in Manila] was second to none.”

Indeed, the venue was rocking when they took to the stage…

Exciting travel perks aside, the best part about teaming up with Macy has been absorbing her work ethic.

Hunter: “She knows how to hustle, and it’s made me take what I do more seriously, and want to work harder. I want to become a better musician. Not just for myself, but for our team.

For good measure, you need to check out this music video of the band performing “Style” by Taylor Swift. You can see Hunter rocking out (like he always does), stage right.

The first thing you notice about Hunter is that there isn’t a more genuine or down to earth person around. After performing with Macy this past spring at the Radio Disney Music Awards after party, he was introduced to the President of Schecter Guitars, Michael Ciravolo. But instead of discussing strictly music, the two chatted it up about an entirely different topic… their mutual passion for recreational shooting…

Hunter joked, “Being from Arizona, I like guns, a lot. And he’s really into guns too. So we ended up talking about glocks for a good 30 minutes… You never know what you might have in common with somebody.” Apparently, he made quite an impression on Mr. Ciravolo, because the following day Hunter was approached for a sponsorship deal. 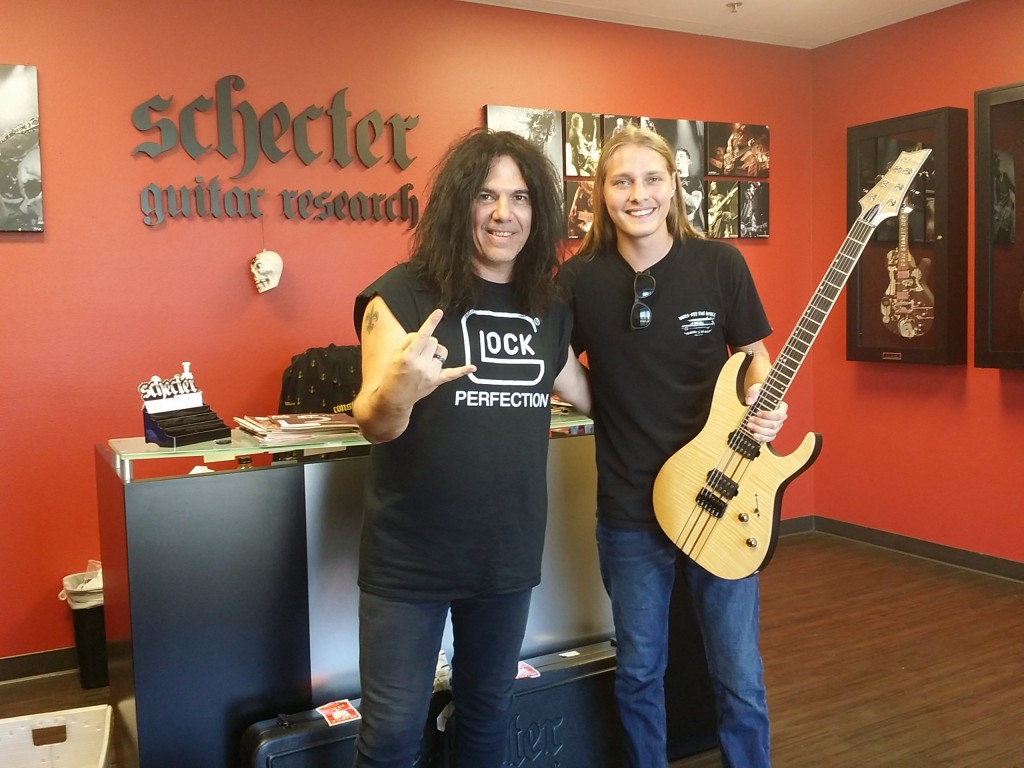 Other artists that Schecter represents include Avenged Sevenfold and Black Veil Brides, both of which are tremendous influences on Hunter’s guitar playing, as he wishes he “could play guitar like Synyster Gates.” Well, he’s not too far off if you ask me.

Currently, Hunter’s weeks consist of studio work, playing gigs, and most importantly, being around for his family.

Hunter: “I take my sister to school and help out my dad with work when I can. It’s nice to be there.”

His recent successes have also afforded him the ability to give back financially.

Hunter: “Before, when I had [fewer] gigs, I didn’t really have the kind of money to give back. But now I can do things like buy my sister birthday gifts and be the cool big brother for her.”

You’re probably starting to see what makes Hunter Pea stand out from the crowd. But don’t be fooled by his kind-hearted demeanor. When it’s time to get serious and put in the practice hours, he’s going to outwork everybody.

Hunter: “Each night I like to do something different [on stage], whether I’m trying to emulate Clapton’s phrasing or rocking out like Kirk Hammett.”

It always comes back to Metallica with this guy.

Hunter acknowledges that talent alone is not enough to survive the fierce competition of the music industry. In a generation where many young people are looking for instant stardom, he recognizes the importance of his years spent practicing, and performing for live audiences in order to hone the craft.

He also attributes the rise of social media in helping himself, and other independent artists, garner a following. Not only is he into Twitter and Instagram, but he has even discovered the value of Snapchat…

Hunter: “It’s very personal… you open it up and you get a snap from people who support you. It’s really cool, I never thought something like that could happen.”

And his response to detractors that claim ‘rock is dead?’

Hunter: “Music is always evolving… that’s honestly kind of the motto of rock music. Something that always, constantly changes.”

To Hunter, modern rock music lives on through the rebellious, storytelling capabilities of bands like Foo Fighters, Queens of the Stone Age, and Muse.

Hunter: “Some of their riffing reminds me of the 60’s rock that was so loud and aggressive.”

If you have any further questions regarding the state of rock music, I urge you to attend one of his open mic shows at Shamrock.

But as much as Hunter expresses a penchant for hard rock and metal, his favorite times as a musician are when he’s strumming pop rock grooves with Macy Kate and the band.

Hunter: “I sometimes miss the stuff I play with Macy when I do my other gigs… she lets me be really creative, and it makes for a fun overall sound.” 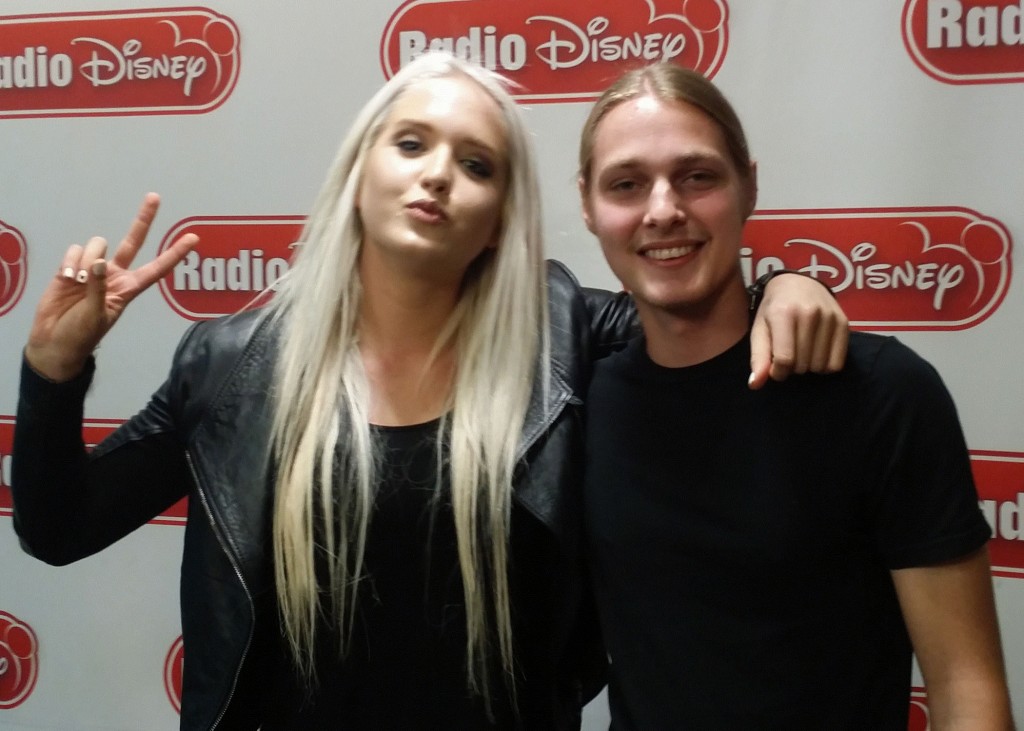 Hunter is living proof that young musicians can’t be afraid to roam outside of their musical comfort zone. Because it doesn’t matter what genre you’re performing. If you’re going to make a career in music, you have to know how to respect and collaborate with your fellow musicians.

Well Hunter, it looks like you’re having no problem on either front.

To learn more, follow him, @hunterdpmusic on Twitter. Or at facebook.com/hunterdpmusic. He’s also featured in more videos with Macy Kate, found on her YouTube page, MacyKateMusic.