The Night I was Supposed to Interview The Chainsmokers

Note: I write these events as they happened from my vantage point. My friend Johna can validate the Boulder part of my story as she was there to witness it all. I write this with no judgment of any parties involved and leave the facts up to reader interpretation.

It has taken me almost four months to figure out how to tell the story of my almost interview with the now somewhat infamous DJ duo, The Chainsmokers… I fought with myself about how to best relate the tale. But after all this time I figured, why not just explain things how they happened from my perspective? So here it goes…

It’s April 2014 and I’m at home in the mountains for the weekend, taking a break from my hectic life in Denver. I get a text from Ascher (owner of Writtalin) saying:

“I have an opportunity for you. Gonna be a huge interview. I need you to do this.”

He then sends me the YouTube link to #SELFIE by The Chainsmokers. I flip.

I may be the only person on this planet to admit it, but I LOVED #SELFIE when it first came out. As a UCSB grad and former sorostitute who loves EDM and the culture that surrounds it, the song was basically made for me. Yeah, the vocals are a bit over the top and the drop isn’t EDM magic, but I loved the tempo and satire-laced words. I mean, I’d be lying if I said I’d never uttered something along the lines of:

“Can you guys help me pick a filter? I don’t know if I should go with XX Pro or Valencia. I wanna look tan.”

So I jump at the chance to interview the guys behind this hit. Another thing- I was a pre-#SELFIE Chainsmokers fan. I have been listening to them since fall of 2013, eating up their remixes of mediocre songs like “We Own the Night” by The Wanted.

The night of the interview comes and my friend Johna and I rave ourselves up and drive the 30 minutes to Boulder. It’s a pretty warm night for early spring so we’re in tank tops.

Once in Boulder, plans start to fall apart. We haven’t heard from The Chainsmokers’ management since the day before, so I don’t know if I’m on “the list,” where to meet the guys for the interview, or even if the interview is going to happen.

But then, around 9:30 p.m. (The Chainsmokers are supposed to go on between 11 and midnight), I get an email from their manager assuring me that if I get in touch with the stage manager at the Fox Theater, she will make sure the interview happens.

I text the number he sent me and get a less-than-enthused answer from the stage manager who clearly has NO idea what I’m talking about. After 15 minutes or so of passive aggressive texts, she assures me that I am on the list, but she can’t promise me that I’ll get to talk to Alex and Drew (yes, I am on a first name basis with these guys now… Don’t worry, the meat of this story is coming).

Johna and I go to the show, get our #SELFIE on with the young Boulder crowd (and when I say young, I mean YOUNG. There were 14 year olds there, I KID you not) and when the last song is done, I make my way to the stage. As the crowd thins, I tap Drew (the younger of the tw o- 24 I think) on the shoulder and say,

“I know this sounds crazy, but I’m supposed to interview you guys. I have the emails from your manager. I promise it won’t take longer than 15/20 minutes.”

Surprisingly, they both seem to welcome the idea of the interview. I let out a sigh of relief, believing it is all going to happen smoothly… How wrong I am.

15 minutes pass, then 20 and the guys are still taking pictures and schmoozing with fans. Drew makes it very clear that he is no longer pumped on doing the interview, but Alex (28 I think) keeps assuring me that they will answer my questions in “just a second.” But then it turns into “Well, just come with us to this after party, we’ll do the interview there. Promise.”

I protest – “Really guys, this will only take a little bit of your time. I’d rather just get it done here.” – To no avail.

So then, it’s 1 or 2 a.m. (by this point I’m delirious and just want to get the interview done and go to bed) and Johna and I are following Alex, Drew, and a crowd of CU kids to a house party on The Hill, passing frats and sororities as we make our way. A journey to my past, it would seem.

The house we walk into is straight out of my college memory – there is very little furniture, it is lit entirely by black lights, the back wall is a bar, and there is bad top 40, rap, and EDM blasting from huge speakers…

Drew disappears, but Alex stays close. All the girls are fawning over him – “Ohmigod- your set was SO good!!” they gush. “I know this is so cliché, but can we get a selfie with you?”

But Johna and I just stand there, indifferent. And it is my belief that Alex is kind of into how “meh” we are towards everything. He jokes with me, flirts maybe. Dare I say I develop a bit of a crush?

But after awhile I become irritated and start to bug Alex every five minutes or so about the interview. He actually is being really nice and keeps assuring me it is going to happen.

Then, while we wait, Johna turns to a guy that’s near her and asks,

It takes all we have to not bolt right then and there as Johna and I are both 1989 babies.

Around 2 or 3, Drew appears and the duo exclaims that they are ready for their interview. We go outside and sit down on an old, worn out, dirty couch. The order is Alex, Johna, me…then Drew lays down across the top of us, clearly more than a little intoxicated.

A bit thrown off but not surprised, I start with my questions:

“Will you give me a little bit of background about how you guys started?”

Before I have the chance to explain that I know The Chainsmokers’ origin, but Writtalin’s readers may not, Drew shouts, “No! We will not give you any background!”

I won’t type it all out here, but in a nutshell here is how the rest of the attempted interview went: I ask a question and they say something along the lines of “that’s the worst question ever.”

As someone who has been told by EDM great Fedde Le Grand that I ask “really great questions” only weeks before, I have to admit my confidence is shaken.

After this back and forth a few times, Drew and Alex take matters into their own hands, asking me questions like:

And then the ever classy:

Five minutes of lewd gibberish later, and Drew is back in the house taking handle pulls of Burnett’s creamsicle-flavored vodka. Alex is left to shrug and offer a lackluster apology. Somehow though, I wrangle them into a couple pictures before they leave to go straight to the airport. And, I make them promise that if they come back to Denver, they’ll do a real interview with me. Heck, I even get a hug from Alex! 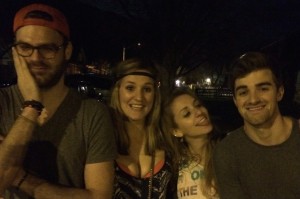 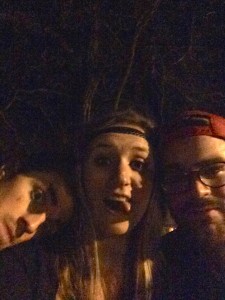 A few days later, I send a professional, albeit bitchy, email to The Chainsmokers’ manager. He replies promptly, apologizing for the misunderstanding and assures me I’ll get my interview the next time they are in town, which will be fairly soon.

But as the new date to do the interview approaches, it again becomes clear that it is not going to happen.

This time, their manager is upfront about the guys not being reliable enough to get the interview done after their show due to “possible exhaustion and intoxication.” But I do get on the VIP list and the manager promises that Alex and Drew will take a better picture with me. He also says that we can schedule a Skype interview for sometime in the near future.

Again, I wait until the end of their set to bother them. But when I approach the stage and say to the guys, “Hey remember me? You owe me a picture!”, the roles of the two are suddenly reversed. Drew is polite and Alex immediately blurts, “The worst interviewer ever!”

I get my picture, but, needless to say, I’m still waiting on that Skype interview. 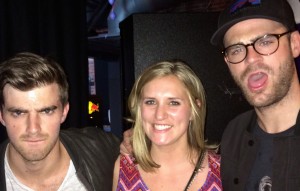 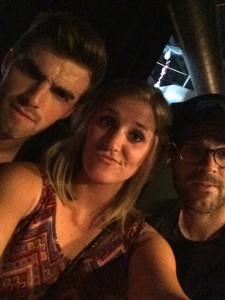 This story finally told, I must make a few things clear. I do NOT hate The Chainsmokers. I’m actually quite a fan of their work. Their remix of “Goodness Gracious” by Ellie Goulding is one of my jams. And though I’m still not totally decided, I think I like their latest single “Kanye.” I don’t regret trying to speak with them and I don’t take back my former enjoyment of #SELFIE (although I’ve over-listened to it at this point).

So Alex, Drew, management, etc., if you’re reading this, I’m still up for an interview!