Late December in Colorado is always a gamble weather wise. Last year, NYE brought with it sub-zero temperatures, leaving revelers to run from place to place. So when this year, it is 30 degrees instead of -10, it feels almost balmy. We head to the Colorado Convention Center with smiles on our faces, eager to greet the New Year by dancing two glorious, EDM-filled nights away. Walking into Decadence this year is a treat – giant white jellyfish hang from the ceiling, leading attendees from one stage to another, making for a whimsical feel.

The first show that I make it to on the first night is Baauer vs. RL Grime – a set that I’ve been eagerly waiting for since the lineup came out last fall. Though my crew is running a little late, we make it in to catch the last half of the set. Baauer and RL pull us in immediately, offering up dirty trap beats with bass that shakes us to our very cores.

The man, the myth, the legend, Marshmello, follows Baauer and RL Grime. There are clearly a lot of expectations coming into this set and Marshmello does not disappoint. The masked producer seamlessly mixes much of his original music with EDM favorites and rap and hip hop. Another feat? The amazing visuals. Throughout the set, the screens are filled with brightly colored graphics that vary as much as the songs Marshmello plays.

From the madness that is Marshmello, we head to the Timekeeper stage to catch back-to-back big room/progressive house sets. First comes Showtek. The Dutch brothers that make up Showtek dance around the stage, dropping banger after banger. Feeding off of their energy, the crowd roars as Showtek plays hits like “Booyah” and “Bad.”

The last reverberations from Showtek are barely gone before American producer Borgeous hits the decks. Still full of energy, Borgeous backs away from straight bangers and plays lots of vocal dance tracks peppered with trap, top 40 and other EDM favorites. 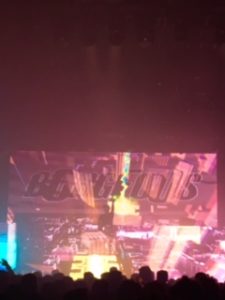 As a finale to night one, Colorado favorite, Adventure Club comes on. From start to finish, Adventure Club brings an electricity that can’t be harnessed. The set is full of contradictions – hype but soothing, full of hard dubstep but also melodic vocals – all very true to Adventure Club’s vibe.

The first night of Decadence was great, but there is something about New Years Eve that brings a higher level of excitement to night two. From the second I step up to Big Wild’s set, I know that the night is going to be explosive. Big Wild has a flavor all his own, but tonight his music seems a little more upbeat, a little more fiery. He drops his recent hit “Invincible” and then closes with the song that put him on the map, “Aftergold,” all while moving around the stage, playing live drums and shaking his beautiful, flowing locks back and forth. I love Big Wild shamelessly.

We catch part of Michael Brun’s set which is surprisingly hype considering the original music that I know of his. I’m definitely impressed and hope to see him again soon. Then comes what everyone has been waiting for – the infamous bad boys of EDM who the masses love to hate – The Chainsmokers. From the first drop to the last, The Chainsmokers’ set is gold. Reading the crowd well, the American duo jumps around the decks and pumps up the audience just enough to keep everyone in the palms of their hands the entire time. They play all of their crowd favorites – “Closer”, “Roses”, “Kanye”, etc., but then blow my mind by dropping Illenium’s remix of “Don’t Let Me Down.” 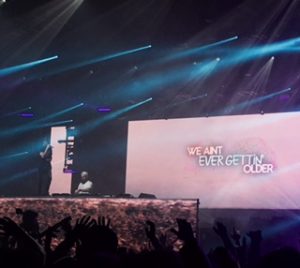 From The Chainsmokers, we head back to the Daydream stage for Flume. Always staying true to his sound, Flume plays a lot of original tracks, but unlike the set that I saw at Red Rocks last summer, he throws in some familiar trap, rap and top 40. Still, the Australian producer makes the stage his own and his music proves to be the perfect backdrop for a massive balloon drop as the clock strikes midnight. 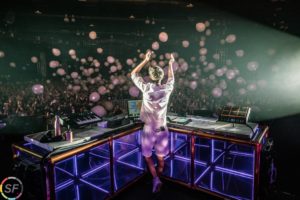 The King of EDM himself, Tiesto, closes night two of Decadence this year. Despite not always being super consistent (I’ve seen Tiesto multiple times and have been blown away in one set and disappointed in the next), he throws down a perfect set. The Dutch producer plays an uplifting, crazy high energy set full of progressive house vocals and amazing, soaring drops. He plays original music, EDM favorites (both old and new), along with a variety of songs from a number of genres. To speak to this point, Tiesto closes the set with an amazing remix of The Killers’ smash, and one of my favorite songs of all time, “Mr. Brightside.” Happy New Year indeed.