Posted On March 14, 2014 By Cat Hausler In Artist Interviews, Music

Artist Insider: A Chat with Up and Coming DJ Treyy G

It was a passing conversation that led me to an interview with Denver DJ Treyy G. I was talking to a co-worker about a shared love for EDM and he mentioned that he knew Treyy and I suggested doing an interview, and a few weeks later, here we are.

Trey Garrett is 20 years old. He has tattoos on every inch of his body (that I can see), and large gauges in his ears. Tall, but slim, he might look intimidating to some, but the second he opens his mouth, every preconceived notion vanishes. Trey laughs and looks down, as if embarrassed, when asked about how he got to where he is today.

“This question is so hard,” he laughs. “I don’t know, I just started making music.”

Originally from San Jose, CA, Trey has been in Denver since he was 12. He started making music, primarily hip hop, when he was eight, but then stopped when he was 17 because he thought creating music for a living “was just a dream that would never come true.” But then two years ago, Trey jumped back into music and decided to start making dance tracks with his vocals over the top. It was all up from there – Trey got contacted by multiple producers to do vocals on their EPs, then his first 10 original releases charted on Beatport. Trey’s most lucky break came when he was approached by Contiez to do vocals on the producer’s track, “Trumpsta.”

“I put the vocals off for five months,” Trey told me. “And then one day, Contiez was like, ‘you can do the vocals or not.’ And so I sat down and wrote them in five minutes.”

And good thing he did. Trumpsta has gained international fame over the last year, and the music video that was released two weeks ago already has hundreds of thousands of views on You Tube.

The young DJ may not be a household name yet, but that will likely change very quickly – he was recently signed to EDM label Ultra Records and just got back from his second stint touring in Northern Europe in 2014.

I sat down with Trey just two days after he returned from Denmark to chat about his ever-growing career and his hopes for the future. 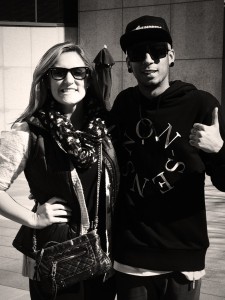 Cat caught up with Trey on Wednesday.

How would describe your sound?

I like that! Is that kind of your music philosophy?

You kind of bridge this gap between EDM and hip hop in your music- where do you pull your inspiration from?

Trey: I mean, I listen to really good music, and I want to make my own really good music. And then there’s specific songs that every producer has that inspire me. But I’m always looking to make things completely my own.

Are there any producers or artists that have been key in shaping your sound?

Trey: Yeah, Calvin Harris is my favorite producer. His career is similar to what I’m trying to do- he produces, and DJs, and does vocals on his own music. And it’s pretty crazy, because doing all that isn’t easy.

I know you do a lot of remixes- are you working on any original music right now?

Trey: I have a bunch of original music coming out. I’ve just been keeping it to myself for a while. But I’m going to release it really soon.

So, Trumpsta is signed to Ultra Records – how did that happen?

Trey: Last spring, Trumpsta started signing to some big labels. And then Safari, the label that distributes tracks to other labels, told us that there was interest from a big label in the U.S., and it just happened to be Ultra. And it just went from there.

The song recently started being played regularly on the radio in Miami and I’m sure it will start playing other places soon. Two months ago they put Trumpsta on Pandora and it’s getting really popular on there too.

Talk to me about the traveling you’ve been doing lately.

Trey: I played all over Denmark- I played in Copenhagen a few times which was awesome, and in Germany once. I did over 25 shows and I still have another European tour coming up soon.

But Denver is your home base – how do you think the music scene here has formed who you are as an artist?

Trey: It’s awesome here. Colorado has helped me a lot. Three of my most influential mentors are in Denver. First, Alan Endorfun told me that if I never produced and only DJed, my career would never get off the ground. So he really encouraged me. The second one is Vinnie Maniscalco – he really was the one who got me into EDM. And last is Au Hau who owns Crowdsurf Concerts.

Have you played most of the big venues in Colorado?

What are some future goals of yours?

Trey: Long term, I want to own my own company. Probably a recording studio for underprivileged youth that can’t learn how to make music on their own.

This may sound really ridiculous, but my ultimate goal is to be the best, honestly. It may sound crazy, but I shoot for the stars.

As far as festivals and venues go, I would love to play Ultra, anywhere in Ibiza, the Gorge, and Hakkasan.

You’re playing Trap Fest on Saturday – talk to me about that.

Trey: I’m pretty excited. It’s my first show in Colorado since 2013. I’m looking forward to playing for all my Colorado fans – they’re like my family. It’s awesome. I have a ton of original music I’m going to premiere there. So that’s exciting. This set is going to be all bass.

The lineup is great and it’s at the Fillmore this year, which is a fun venue.

Is there something special about Denver crowds?

Trey: I’ve never played anywhere like Denver. Nobody else gets crazy like the Denver fans. They get so wild, I don’t know what it is.

Trap Fest is sold out, and if that’s an indication of how Trey’s career will go, 2014 will prove to be a huge year for the young DJ. Check out the Trumpsta music video here: