Posted On April 13, 2014 By Staff In Miscellaneous, Rants

What the Marine Corps Recruiter Doesn’t Want You to Know

Despite the boyhood day dreams of jumping out of airplanes shaped like sandboxes and sniping terrorists in my backyard with broom sticks, I had little actual inclination to join the military.  I went through a brief period in high school where I wanted to be a Navy SEAL because I thought it was cool to have a goal that others could not achieve, but in reality, and like most people I’ve met, joining the military was more of a plan C or D than anything else.  Of course, soon after joining and before I knew any better, it was all about honor, courage, and commitment and all the rest of the tag lines and buzz words service members regurgitate when trying to explain why they joined.  As far as real reasons for joining, I’ve heard “to avoid jail,” “because I liked the uniform,” “to get laid,” and “for free college.”  One of the most memorable quotes that stuck with me when it came to the Marine Corps reality was “The boots (younger Marines) are pissed off because they don’t understand what’s going on and the salty (senior) Marines are pissed off because they know exactly what’s going on.”  Although comical in nature, this is unfortunately an astute observation that held true for much of my Marine Corps experience.  There are some things that are so bizarre that I was floored as to how I got into the Marine Corps unaware of them. 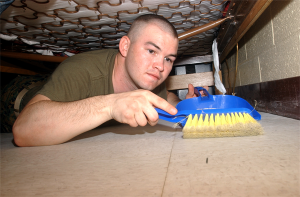 “Damn, I wonder when we get ice cream.”

I had thought, previously to the spring of 2008, that field day was something that involved elementary school students, sack races, dizzy bats, and ribbons.  But when I became a recruit, I learned that the term “field day” is a dreaded noun and verb that takes place specifically on Thursdays all across the Marine Corps.  We “field day” the work spaces at the end of the day before they go to our living spaces and wait for the “field day” there to commence with a “field day formation.”  By formation, I mean a giant rectangle where everyone regretfully stands in neat rows and columns so that they can be told by an appointed leader (who is all too often kissing ass enough for everyone to hate him) that determines who sweeps which stairs, or who mops which common rooms, etc.  Then, the Marines all get “released” to clean their actual living spaces with their roommates that probably number in excess of the building fire code as well as the social standards for personal space.  There have been times when I was stuck “field daying” my room for hours, still wearing my uniform, until 7 or 8 at night because my room couldn’t pass someone’s inspection.  I’ll add that the actual inspection occurs on Friday but what happens is that every person in the line of people who have an interest in the rooms being clean have a standard that has to be met to ensure they don’t look incompetent to the authority figure above them.  For example, the colonel wants clean rooms and puts a captain in charge of all the building, including the barracks (living spaces).  The captain gives the a gunnery sergeant a rough idea of what he wants for the barracks so that the colonel is happy.   The gunnery sergeant appoints a sergeant as basically a barracks nazi and so now we have all these people each with varying degrees of what needs to be done and how but each person’s orders all get compiled so by the time it gets handed out as instructions it’s a whole bunch of WTF despite the fact that the only idea was to simply be not dirty.  So basically, in the Marine Corps, you generally spend a few hours cleaning every Thursday, and every so often, it will be more like five hours.  And then sometimes you will fail the inspection on Friday and have to redo the inspection again on Saturday morning wearing a uniform that is so uncomfortable it makes you hate kittens. 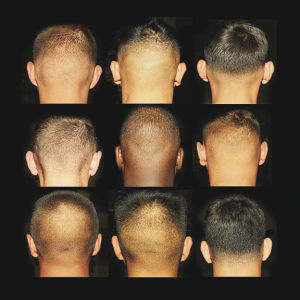 Most of these fall between Hitler youth and Kim Jong Un

Another concept that I wouldn’t have been able to fathom before I got in (and still struggle to comprehend now that I am out) is the idea of getting a haircut every single fucking weekend.  My math estimates that I got more haircuts in 5 years than I have gotten in my entire life as a civilian.  That includes the three that I’ve gotten in the past year.  And there are people in the Marine Corps that can tell how old your haircut is in days.  Hell, after 260 haircuts, I’m a pretty good judge of it too.  So, needless to say, it has to be fresh.  One of the ways you can tell you are near a Marine Corps base is the number of barber shops rise to the tune of maybe 3,000%.  There are literally dozens within yards of each other all because tens of thousands of Marines need a haircut and most of them are going to procrastinate and go on Sunday.  God help you if you need a haircut on a Sunday afternoon in Jacksonville, NC .    And if this all couldn’t be ridiculous enough, the allowed haircuts come in about 5 flavors.  4 of them make you look like a Nazi and the fifth one makes you look like a neo-Nazi.

At one point in my life, I was able to say “TIL that for the next 30% or so of my life, I will not be allowed to place my hands in my pockets.”  Not even if it’s cold outside.  There have been times in the winter where one person didn’t have gloves so we all had to take our gloves off and were not allowed to put our hands in our pockets for the sake of uniformity.  Marines even get taught not to place their hands in their pockets at boot camp. 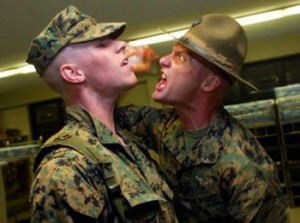 “To slit someone’s throat, cut from here to here. To do a tactical reload, perform this action. This is how to evade your captors if you are a POW. Oh, and never put your hands in your pockets motherfucker!”

You could easily be at the gas station with your hands in your pockets and get verbally assaulted by a complete stranger that has been deluded to believe it is his civic duty to prevent a Marine from putting his hands in his pockets.  And there’s another sweet pocket rule.  Marines can’t put anything in the cargo pockets of their cammies, but that’s actually being gracious because when it comes to all the other uniforms, they can’t put anything in any of the pockets!  Where do they put shit you ask?  In their fucking socks.  I can’t even make this shit up.  On Fridays the Marine Corps has to wear a service uniform instead of cammies and if you go to the store, you will see people digging in their socks for their bank cards and cash.

Things you can’t do while walking

Next in the list of arbitrary rules that America’s few and proud are forced to follow is the things they can’t do while walking.  If you thought that commuting to a business meeting by foot and placing a phone call while walking might just be an efficient thing to do, you are obviously smarter than whoever made the decision that it cannot be allowed in America’s Marine Corps.  No shit, you will get yelled at by strangers for walking and using your cell phone in any manner while in uniform.  You also may not drink water or eat while walking in uniform either.  I’m surprised Marines are even allowed to walk and talk at the same time. 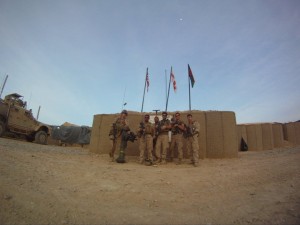 We used to play this game where we would spread ridiculous rumors around our circle of friends and we soon learned that we could say almost anything and people would believe it because nobody puts it past what the Marine Corps is able to come up with and seriously attempt to enforce.  All this being said, I both hated and enjoyed my time as a Marine.  I worked with some amazing and dedicated people even though they were far fewer in numbers than those of the idiots America’s villages were able to pawn off.  I knew I had absolutely had it after a semi-drunken conversation I had with my Lieutenant several months before I was due to get out.  He was enlisted before he was an officer and his conduct and leadership made it obvious.  Well-liked and respected by most everyone, he was a far cry above the average officer.  The setting was at the annual Marine Corps Birthday Ball in November.  One of the few nights a year that Marines are damn near encouraged to drink in excess and hob nob with their superiors.  I asked him why he became an officer after being enlisted.  “Because I thought I could make a difference”, he replied.  “And?” I asked.  “I can’t.  You can’t wake someone who’s pretending to be asleep.”  Thank you for that, sir.  You showed me that my interests and efforts will be better stimulated and utilized elsewhere.