Posted On February 16, 2014 By Renée Rapin In Buzzworthy, The Scene

The Happiest Animal You Will See All Day: The Quokka

Oh my goodness you guys. Look at this precious animal. It is the happiest creature I have ever seen in my life! It’s so happy it’s almost cartoonish. I WANT TO HUG IT.

The Quokka is a small marsupial from Australia. I know what you’re thinking, OMG it’s from Australia it probably shoots poisonous darts and wants to eat me! No. The Quokka is 100% harmless to humans and totally friendly. It’s been known to approach humans on its own. Just don’t touch it, Australian law states it is illegal to handle these animals in anyway. So for now, just look at it. LOOK AT IT. 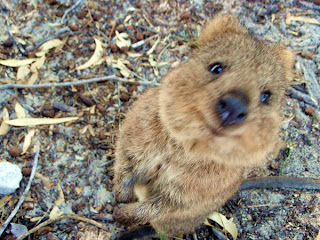 The Quokka is listed as “vulnerable” on the IUCN Red List of Threatened Species. So come on everyone, do what you can to protect these little, itty, bitty, chubby cheeks! Brb, dying.

THAT SMILE AND THOSE CHEEKS.

This Quokka doesn’t even care that it has stuff on its nose. It wants to be friends, I know it. I wish a Quokka would photobomb with me.