Posted On April 22, 2014 By Corben Barnett In Sports, Sports Takes

I know that the actual season is pretty far off still, but I can’t stop thinking about it with all the spring football games going on ESPN and all the analyst buzz starting to pick up around who’s going to be the team to beat this next season.  Here are 5 questions that I’ve compiled to think about as we move closer and closer to the beginning of what should be a pretty interesting season of college football.

1. How will the implementation of the 4-team playoff change the game, if at all?

If I had it my way, I would have AT LEAST an 8-team playoff all through the month of December that included all the drama and passion of college football that makes it the best sport to watch.  I would also make sure that the AP Poll was the final word on who was ranked where instead of letting computers make the decisions. However, I think that a 4-team playoff is an excellent step toward severely limiting the chance that we have a repeat of the 2013 BCS Championship where Notre Dame got absolutely embarrassed and most people stopped watching at halftime – unless they were Alabama fans. I just want to watch football, and any system that includes more games that pit the best teams in the nation against each other is fine by me. 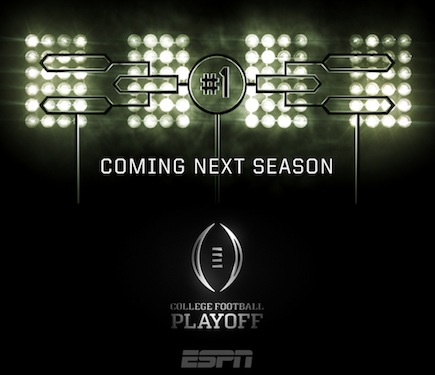 2. Will Alabama regain its glory?

Answer: maybe. Although Saban has consistently put together top tier recruiting classes, and Alabama has some of the best coaching and facilities in the nation, there seems to be a chink developing in the armor. They were not as dominant this year as they were the year before. They lose AJ McCarron, a huge leader on the team and starting quarterback for three years. While they’ve been able to just replace positions for so long, it’s hard to replace a leader. When they lost to Auburn the way that they did in the Iron Bowl – a play that will go down in history as one of the craziest endings in college football history – it was a culmination of a season in which Alabama seemed to be constantly pulling games out by their fingernails. They faced an Auburn team that came ready to cement its legacy. Then Alabama went to the Sugar Bowl and got upset. Again. Oklahoma, the best program in college football history (not a personal bias, I promise), came ready to make their season and try to show that the best teams in the Big 12 can compete with the best teams in the SEC, and they succeeded. The fact is, there’s now doubt working against Alabama and the rest of the SEC. A couple years ago, I would have argued for weeks with someone about how the Southeastern Conference was the best conference in the nation and nothing could have changed my mind. After this last bowl season, I wouldn’t be so sure. Regardless of extraneous factors such as player morale and lack of motivation from teams not getting to the games that they wanted to, I still believe that those bowl games in which SEC teams stumbled this past postseason might be the first inkling of an end of an era. 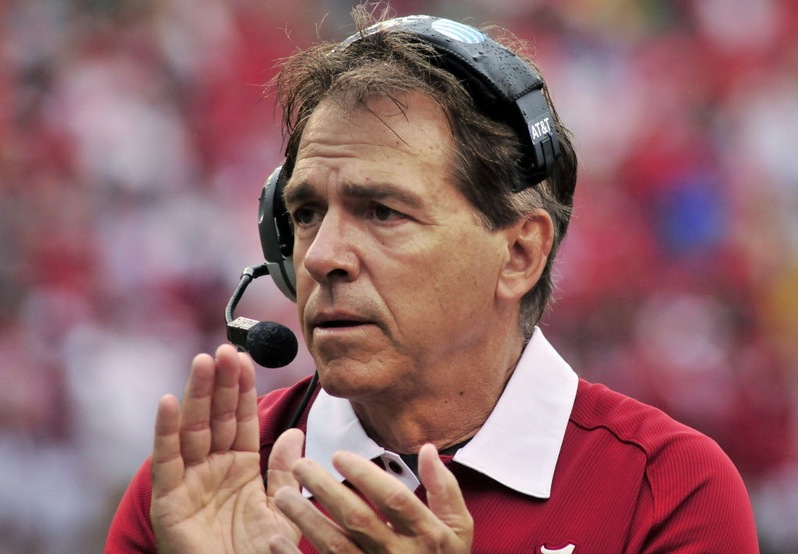 There’s no doubt that Jameis Winston, the Heisman-winning freshman from the most recent National Champions in Tallahassee, Florida, is a playmaker.  This kid is the real deal.  He can run, throw, lead, inspire, and ignite an offense when the moment is right.  He showed that in January when he led his team on that final drive against Auburn to win the game after it seemed as though the Tigers had cemented their win and the SEC was going to maintain its streak of national championships.  There doesn’t seem to be any sign of Winston slowing down either.  After watching highlights of the FSU spring game he still seems to have the confidence and know-how that he did at the end of last season, and he’s only getting better.  If he keeps this up, I don’t see why Florida State couldn’t be a contender for another national championship.  The only obstacle that I can see for Winston at the moment is this resurgence of the rape allegations against him that were mysteriously dropped all of a sudden last year.  The New York Times let an article out earlier this month detailing new specifics that have surfaced over the allegations that point toward the possibility that these allegations were not investigated at all.  These new developments have the potential to derail a season for the Seminoles, as well as a career for Winston, if the prosecutors are able to actually bring this to trial at some point.  For now, all we can do is watch and wait.

4. Is the Southeastern Conference still the most dominant in college football?

I think that we can all agree that the SEC is starting to slip.  The top teams in the SEC continue to play good football and they get good recruits because they win games.  This past bowl season showed us, however, that the SEC is maybe more vulnerable than may have originally been thought.  The same thing is happening with college lacrosse, on a smaller scale.  I’m a lacrosse player by trade, but I’ve played a lot of football in my day as well.  I saw how hard it was to get recruited to go and play football in college, so I started to focus more on lacrosse when I got to high school, and then I quit football after my sophomore year.  I have since gone and played Divison II lacrosse and am now spending time in my room mooching off my parents and pretending to know what I’m talking about on the Internet.  Five years ago in the world of college lacrosse, there were pretty much only 5 teams that were even in contention for the national championship.  However, as each year passes by, it seems like more and more teams are becoming serious title contenders as they start to work their way up the ranks and make the top 25 more and more consistently.  Why the sudden change?  The explanation for this phenomena is really not that complicated.  Those top 5 teams cannot recruit every single high school player in the nation that is good at lacrosse, so therefore there are some that slip through the cracks and land at teams that didn’t used to be that good, but are now starting to gain ground.  The same is happening with college football now.  The top SEC teams are going to get some top recruits, but there are some hidden talents and some other guys that they cannot court because of location, school atmosphere, etc. that are going to these other schools looking to make a name for themselves and they are coming out to play whenever they go up against a team from the SEC.  They have nothing to lose, and the SEC teams have everything to lose just because of the conference that they play in, so they’re starting to crumble under the pressure.  As I stated earlier, I think that we’re starting to see an end of another era in college football. 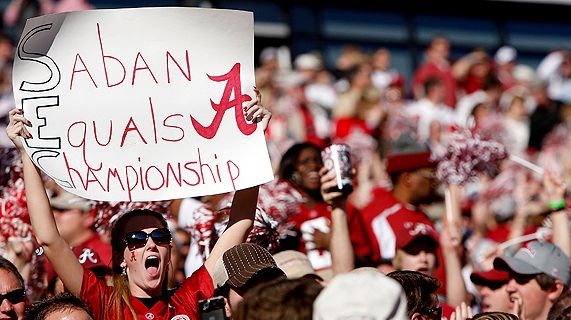 Personally, I believe that unions ruin everything.  I have this irrational fear of anything organized, to the point that I won’t even join clubs when I’m at school.  Unions make things so much more complicated, and sometimes have such high standards when they engage in collective bargaining with businesses that it brings everything to a complete standstill and makes it impossible for things to function properly.  When it comes to the Northwestern football team organizing into a union, I have no doubt that this bodes ill for the sport.  The players are arguing that since they are the ones performing on Saturdays to sell tickets, that they should be able to get a portion of the massive amounts of money that some of these bigger schools rake in during the football season.  Their viewpoint seems to be reasonable, considering the fact that if they all quit and walked out then all those angry fans would probably want a refund, which would probably take a large chunk out of the budget for that specific school.  The main objection that I have is this: what are those kids really there to do?  These are institutions of higher learning and those kids are there to learn and get a degree first, and play football second.  They may have a good chance of making it to the NFL when they graduate so they think that they don’t need a degree, but then what if they get hurt?  Letting them unionize will send a bad message to the rest of the high school players in the nation that are trying to get recruited to go play football.  It tells them that when they get to school, that they are entitled to play football as long as they are there and they are going to be paid to do it.  Also, going back to the Jameis Winston incident, regardless of whether he did it, he was in that situation when he probably shouldn’t have been.  College football players always seem to get in trouble outside of the team.  Do we really think that it would be a good idea to start PAYING them with money that could be going toward scholarships for a student that needs them or for improvement of the campus, when there’s even the slightest chance that they’re going to use that money to get themselves into trouble that woudn’t be nearly as accessible if they didn’t have the funds necessary? 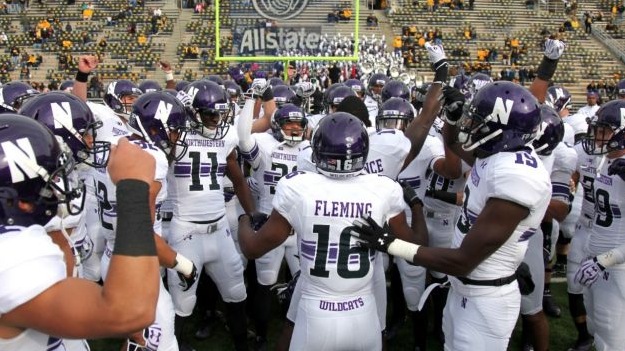 Corben is a 20-year-old Twitter addict that hates Facebook now that his parents - and grandparents - are on it. He classifies himself politically as a Libertarian and actually runs a (small) political blog with his friend from high school, which can be viewed here. He enjoys rap music, porters, Parks and Recreation, and lacrosse. Someday he hopes to retire to the woods somewhere in eastern Tennessee to live out the rest of his days in peace, but for now living with his parents while they pay for college is just going to have to do.