After a crazy Divisional Playoff weekend that saw an insane Aaron Rodgers’ Hail Mary followed by a Cardinals’ walk-off overtime win, a 31-0 first half barely holding up, in Carolina typical Andy Reid clock (mis)management in a Chiefs’ loss, and the defense doing enough to earn another win in Denver, we’re left with four contenders for the Lombardi Trophy.

For the first time since 2004, the final four teams remaining are the top four seeds in the playoffs – #2 seed New England travels to #1 seed Denver in the AFC, and #2 seed Arizona travels to #1 seed Carolina in the NFC. You’d be hard-pressed to make a case that the four teams left standing aren’t the four best teams in the NFL this season; each of these four squads has been playing well all season, never dropping from the ranks of the league’s elite.

With Super Bowl 50 just two weeks away, the field has to be trimmed in half once more. So, which two teams will advance to play in Santa Clara on February 7th? Here are my thoughts.

*Point spreads are accurate as of 1/22 on VegasInsider. HOME team in CAPS. 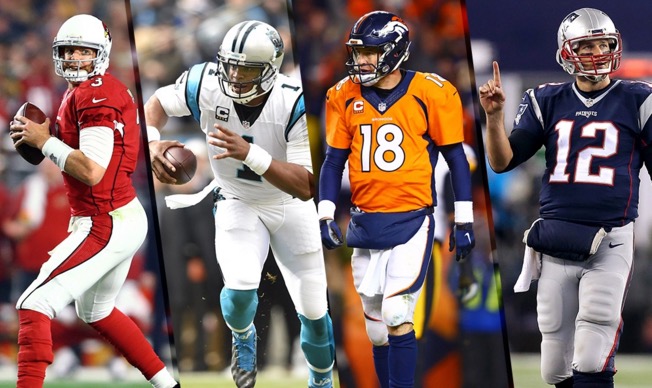 There are so many subplots and intriguing details about this matchup that I don’t even know where to start. I’m a Broncos fan, so take this with a grain of salt, but I legitimately think Denver has the advantage in this game. Tom Brady’s career record in Denver is an awful 2-6. In fact, the Broncos are the only team in the NFL that Tom Brady has a career losing record against. That record includes an 0-2 playoff record in the Mile High City, with a combined score of Patriots 29, Broncos 53. Of course, stats can go both ways, and we all know Brady has beaten Peyton Manning-led teams 11 of 16 times overall

However, this matchup is obviously not as simple as which quarterback performs better. Based on season performance, Brady is an immense favorite to “outduel” Peyton Manning. While Peyton looked decent last weekend against Pittsburgh – and seven drops from his receivers didn’t help his cause – his performance was still rather pedestrian, while Brady continued to put up excellent numbers in the Patriots’ win against Kansas City. But just as easily as one would give an edge to Brady over Manning this season, nobody questions that the Broncos’ defense is superior to that of the Patriots. Denver has had a mediocre-at-best offensive attack all year, while the league-leading defensive unit has thrived, winning several games in which the offense barely helped at all.

In the first Broncos-Patriots clash this season, the Broncos did not stop Tom Brady – he threw for 280 yards, 3 touchdowns, and 0 interceptions, even while missing Julian Edelman and Danny Amendola. However, the Broncos made plays when it mattered, sacking Brady 3 times, hurrying him frequently, and forcing the Patriots to go a pathetic 2/13 on third downs. The Patriots O-Line has steadily improved in the wake of several key injuries, and the receiving corps is finally (mostly) healthy, but look for the Broncos to slow down Tom Brady. With New England lacking any rushing attack whatsoever, the Broncos will likely trust their star-studded front four to get pressure on Brady, allowing for extra men in coverage. And make no mistake – the Broncos secondary is a fearsome group in its own right. The Patriots will move the ball and score, that is inevitable, but the Broncos’ D should limit Tom and Co. to a day well below their season average.

Meanwhile, the Denver rushing attack must succeed in order for the Broncos to win this game. In each of the past four Manning-Brady playoff games, the winning team has been the team that won the time of possession battle. In the Broncos victory over New England in November, Denver dominated the possession game, holding the ball for 36 minutes to the Patriots’ 26 minutes. For the Broncos to win again, they’ll need to run effectively and keep Brady off the field – the formula worked the first time. If Denver can succeed running, Peyton Manning should be able to find holes in a mediocre Patriots’ secondary. I think they do. And I think he does. And I think that’s enough for Denver to squeak by in a low scoring game. 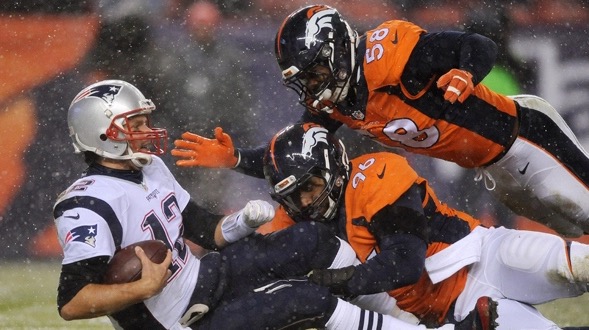 Can the Broncos defense decide another game?

You could make a pretty good case that the Cardinals and Panthers have been the NFL’s two best teams this year; but alas, only one of them can advance to Super Bowl 50. Unlike Broncos-Patriots, this matchup is a first this season, and it should be an all-out showdown between the NFL’s two highest-scoring teams, both with defenses that aren’t exactly slouches.

Arizona is coming off a win in the craziest playoff game in years, surrendering TWO Hail Marys to Aaron Rodgers in the last minute of the game to allow the Packers to send it to overtime, before quickly finishing Green Bay off thanks to Larry Fitzgerald going hero mode early in the extra period. Carolina, meanwhile, has to have some questions to answer, despite beating a talented Seahawks team last week. The Panthers surely looked like the NFL’s best in storming out to a 31-0 halftime lead against Seattle. But then, as they have several times in the second half this year, the Panthers failed to close an opponent out, allowing the Seahawks to score 24 straight points and come an onside-kick short of possibly sending the game to overtime – an overtime in which Carolina wouldn’t have had an iota of momentum.

It’s safe to say both teams kinda collapsed at the end of their respective Divisional games, letting their opponents hang around long enough to put what seemed like certain victory in great peril. Both teams are coached by first-timers to the Conference Championship. Both teams feature rosters loaded with guys that “haven’t been there before.” Both franchises are seeking their first Lombardi Trophy (Cards fans have been waiting much, much longer). Both teams have electric playmakers on offense and on defense; both teams have MVP-candidate quarterbacks this year; both teams have been excellent all season.

So, when in doubt, you take the points. But my gut tells me the Cardinals will be meeting the Broncos in Santa Clara. 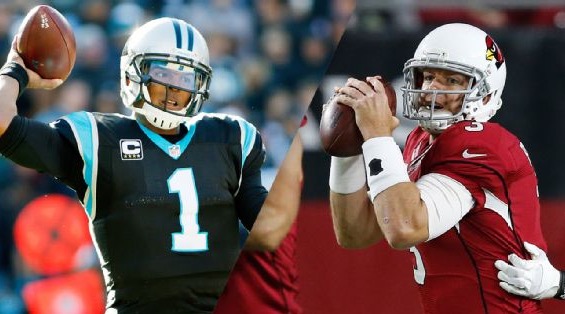 Cam Newton and Carson Palmer have both been spectacular this season.