The Finals at Roland Garros

Novak Djokovic entered Sunday No. 2 in the world. His opponent for the French Open title was none other than the world No. 1 Rafael Nadal.

On top of being No. 1, Rafa is an 8-time French Open champion. Djokovic was looking for his first title at Roland Garros.

Rafa roared back for a hard fought second set win and brought that energy right into the third set taking five straight games in the stretch. The roles reversed and Nadal broke away. Rafa thrives off of long matches and two hours in, he was appearing more refreshed.

With a win at Roland Garros Sunday, Nadal would tie Pete Sampras for second all time on the list of most majors won in men’s singles with 14.

Momentum remained in Nadal’s favor for the third set… 6-2.

In the fourth however, it seemed Rafa was experiencing back pain and Djokovic was there to capitalize on it. The two took the set to 4-4, but Nadal slipped away, fighting through the pain to make it 5-4. Rafa reached a championship point in the next game. Djokovic made it easy for him, double faulting to end the match, and making Rafael Nadal a 9-time French Open champion. 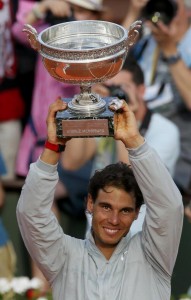 Nadal dropped to his knees and shortly after made the climb into the seats to greet his supporters. “Playing at Roland Garros is unforgettable” Rafa said reacting to his grand slam victory. He is now a 14-time major winner and 9-time French Open champion. 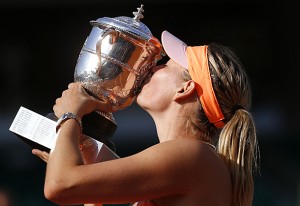 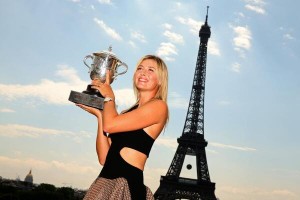 Halep didn’t make it easy for Maria, taking her to tie break and stealing the second set. Maria finished strong ending the match 6-4, 6-7, 6-4. Falling to her knees at match point, Sharapova knew she’d won one of the hardest fought women’s matches in Roland Garros history.

The young Simona Halep was unranked last year and will continue to make noise in the tennis world. As for Sharapova, she now makes Roland Garros her most successful major, winning two of three straight finals appearances.

Sharapova joked, “You’re not just born being a natural clay‑court player. Maybe if you’re Nadal, but certainly not me.”

The win at Roland Garros gave her a renewed confidence that she can play on any surface in the world. Sharapova climbed into the stands after her win to celebrate with her team. On the podium, both she and Halep showed off their French and couldn’t fight back the smiles.