Why We Love Upsets

Watching good teams win is fun. Watching them lose unexpectedly? Even more fun. It’s really sick and twisted when you think about it. Why are we hardwired to enjoy watching good teams lose? Watching the hopes and dreams of young men shattered at the mercy of a mid-major? Hmmm. Gotta love the tournament.

Ah, the NCAA tournament. Unless I have a rooting interest, I want to see as many 12/5s as possible, and then see those 12s go to the sweet 16 and beyond. I don’t usually fill out brackets, but if I did, I would be selecting the Harvards of the world to go to the Final Four. It’s a funny thing, because I would never watch them play in any other month of the year. However, there’s something about March that makes them watchable. Conversely, there’s something about March that makes me really want to see Duke lose. Oh wait, that’s every month.

Most people like to see parity. They like to see the underdog prevail in this tournament. But I think it’s more than just this tournament. We like to think that anything is possible in life. It’s the only reason we get up every morning. Without this hope, it’s an empty existence. Sounds emo but it’s true. We like to think we can reach the top of our field and overtake the big dogs. There’s nothing wrong with lacking this belief if you’re content with your current position in the world. But surely there’s something you’d like to change. Everybody has the upset mentality.

Remember Jimmy Valvano? He led the 6th-seed in the West region to a National Championship, over arguably the greatest college team ever, 1983 Houston. Most of the country was in disbelief that Houston could lose. After all, they had two future NBA Hall of Famers on their roster. But Jimmy V never gave up hope. Sure there was a little bit of luck involved, as Dereck Whittenburg threw up an unintentional alley-oop pass to Lorenzo Charles at the buzzer to win the title. But Jimmy V showed us that a mediocre school in North Carolina could do anything. 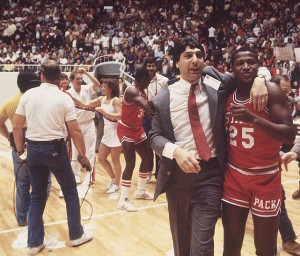 After the greatest airball in basketball history.

Jimmy V passed away a decade later, from terminal cancer, but his legacy lives on. Every year we see a replay of him running onto the court to celebrate winning the title. It’s an image which encapsulates everything about the underdog upset. It’s the reason the tournament keeps us coming back each year.

Bottom line: If every year’s championship game was between Duke and Kentucky, it would reinforce the untrue notion that only the biggest and most historic figures can be successful in this world. Thankfully there are Butlers, George Masons, VCUs, and Davidsons around to give us hope that the top of the totem pole is always welcoming newcomers. Thanks, guys.