In case you’ve been living under a rock, on Jupiter, then you know the NFL Draft happened last weekend and a defensive player from Missouri got drafted by St. Louis in the seventh round. He was really good in college, played on a really good team in a really good conference, and was the defensive player of the year in that conference. He’s a tad undersized for his position but he makes up for physical deficiencies by playing with maximal effort all the time. He attacks the quarterback with frequency, having recorded 11.5 sacks this past season, and he is the first person in his family to have attended college. But I’m guessing this is the first time you have heard any of these facts about Michael Sam. Because what a football player does when he is not playing football is more important, right?

When the Sam story first broke back in February, my initial thought was, “good for him.” He obviously felt a tremendous burden keeping that as a secret, and now he has let it out. Must feel good. And that was that. Beyond feeling good for the kid, I really didn’t care. Back to football. But as predictable as a sunny day in San Diego, the media fixated on his sexuality like a baby on a shiny object.

For the next several days and weeks, we heard opinions from every mouthpiece west of China. From President Obama to Justin Timberlake, from the Pope to Matisyahu, from the backup singer of the Dixie Chicks to the guy who sings karaoke on Tuesdays at a dive bar in Manhattan Beach. Everyone had an opinion, and they were all the same. Mainly that Michael Sam is making huge strides in the LGBT community, which he is. But this was being reported as if it was the boldest opinion since someone once said the world is round. Beezy please. An edgy statement would’ve been, “I’m happy for Michael Sam, but I care more about his football performance than what he does off the field.” But this would never make it to print. Because, heaven forbid you pay respect to a guy’s professional skills. In today’s world, all that matters is how he identifies. It makes for better headlines and shifts away from the paradigm that hard work defines the person.

Homophobia is bad. But people in the media are going so far out of their way to be non-homophobic, that they are labeling individuals based solely upon sexual preferences. Regardless of their remarkable talent or proven abilities. And that’s equally bad. Why? Because both extremes ignore the amazing skillset of the individual, surrendering them to titles like ‘gay,’ ‘bi,’ or ‘leprechaun’ (I was called the latter as a boy, fair skin and freckles will do that to you). These titles objectify and isolate the individual from his fellow colleagues, making it nearly impossible to coexist with them. So while everyone else on the St. Louis Rams is categorized as a football player (or a bad football player, in that team’s case), Michael Sam is known by the media as a gay football player. Or, if we’re going to be super politically correct, the first openly gay football player. But the media does this on purpose. They don’t want him to assimilate because then he would be too regular and boring. He is gay and he needs to be outward and proud at all times. Forget what happens on the field. Self-identification comes first. Within today’s media, it is a philosophy that has become ubiquitous. 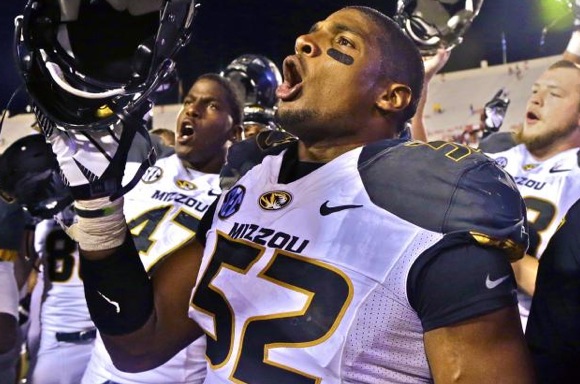 We live in a day and age where everyone wants to be viewed as being a champion for a cause. I’ve noticed during the past few months, between Jason Collins and Michael Sam, we’ve reached the point of nearly bullying people into coming out of the closet. I can’t tell you how many times I have seen panel discussions on certain sports networks (not saying names), where the thesis is, “we need to have more openly gay players in professional sports.” Okay, fine. But the implication is such, that ‘if you are gay, you had better come out, because otherwise you are wallowing in the filth of the regular, hetero swine of the rest of the league.’ It’s basically a guilt tactic. Gay baiting, if you will. And it is not well-intentioned.

It is used to advance the career of the ‘journalist,’ by acting like they are a champion for a cause through repetitive mentioning and insistence that the cause is of imminent importance. But let’s use some common sense here. If several more players came out of the closet, it would not be as big of a deal anymore, so the ‘journalist’ would not benefit. They would have to find another cause to champion. Thus, these people do not want closeted homosexuals to come out in droves like they claim; they just want to talk about it endlessly. The plan is more poorly intentioned since Denny’s began serving bacon smoothies. It is merely a ploy to feed the egos of those in the media, because most of them have never championed anything in their lives aside from occasional bouts of diarrhea. That’s the one thing they can actually control. They all want to be heroes, but they really just care to be relevant. By beating this Michael Sam drum to a pulp (mixed metaphors, sorry), they are making the safe, politically acceptable stance while keeping their careers intact. Glad they aren’t selfish or anything.

Culture of No Common Sense

I have many close gay friends, whether work colleagues or otherwise. Anonymously, one told me, “I don’t want to stand on a parade float wearing pink booty shorts, I just want to be respected for my personal and professional skills, like anybody else. Who I am interested in or attracted to does not define me, my abilities do.”

‘Define’ is such a powerful word. It is the ultimate declaration of who we are. Personally, I would be grossly saddened if people knew me as a heterosexual, white, partially Jewish guy. That may be what I am, in the most literal way possible, but it is in no way who I am. And if I had to go through life being ‘categorized’ like this under the mask of ‘celebrating my identity,’ I would feel utterly worthless. And I can venture a guess that the same goes for Michael Sam.

While it was his decision to come out so publicly, the media has tarnished him by throwing cameras in his home and shooting close-ups of his personal celebration with his boyfriend (images that have now been replayed more times than the butt fumble). So naturally, a firestorm has ensued following this video, with the typical scapegoat being right-wing homophobes. Well, newsflash, the media are the true homophobes under the guise of political correctness. By labeling and characterizing these individuals in such a way, they are adding unnecessary fuel to the homophobic fire, and turning the lives of respectable people into dog and pony shows.