At last, the biggest day in the sporting world is finally here – Super Bowl Sunday. The biggest game of the year is always a spectacle; however, with this being Super Bowl 50, the hype is at an all time high. The NFL has gone all-out promoting Super Bowl 50 – perhaps more so than with any of the game’s 49 previous iterations. And the matchup holds plenty of intrigue on its own – the Denver Broncos and Peyton Manning’s “last rodeo” versus the Carolina Panthers and one of the league’s brightest young stars in Cam Newton.

For the second straight year, chalk held up in both the AFC and NFC playoffs, as the top seed in each conference advanced. The Panthers have been one of the NFL’s best all season long, starting 14-0 before losing to Atlanta and ultimately finishing 15-1. In the playoffs, they made quick work of the Seahawks and Cardinals, getting out to enormous leads against both. The Seahawks stormed back to make it a game, but the Panthers crushed Arizona unrelentingly in the NFC Championship Game.  The Broncos, meanwhile, have been on a season-long roller coaster ride. Denver got off to a 7-0 start before dropping a game versus the colts. Then, Peyton Manning injured his foot, and the team lost 3 of its next 6 games, needing plenty of help to regain its grasp on the AFC’s top seed. But the Broncos got it done, Peyton took time to heal, and the Broncos won close games over Pittsburgh and the defending champion Patriots to get to Super Bowl 50.

No matter what your allegiance is, this is a great matchup filled with plenty of intrigue. So who will hoist the Lombardi Trophy? Here are my thoughts.

-When the Broncos run the ball:

The Broncos have been an up-and-down team running the ball all season long. On the season, they ranked right in the middle of the NFL, coming in 17th with 107 rush yards per game. However, the team improved drastically over the second half of the season, with a young offensive line that started playing better, and increased mobility from Peyton Manning and Brock Osweiler, which helped the offense get under center more frequently – a key in Gary Kubiak’s zone-blocking scheme. The thunder/lightning combo of CJ Anderson and Ronnie Hillman will play a huge part if the Broncos are going to win this game – the Broncos are undefeated on the season when rushing for more than 130 yards.

Carolina, meanwhile, boasts one of the NFL’s best rush defenses, coming in at 4th. On average, the Panthers have allowed 88 rush yards per game, and 11 rushing TDs on the season. The Panthers have been stingy against the run all season long, and will look to bottle up the Broncos backs early, forcing Peyton Manning to throw downfield. This matchup will be a point of emphasis for both teams, and could dictate the direction of the game. On paper, Carolina has the advantage. 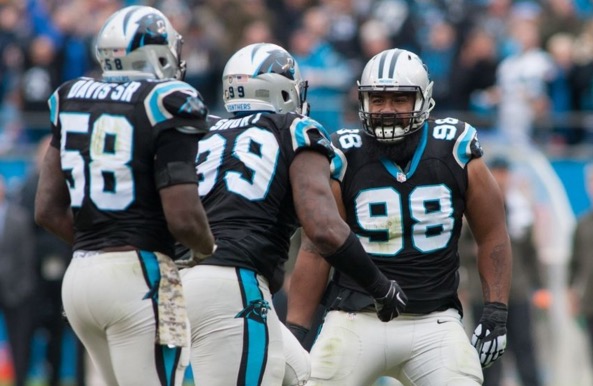 -When the Broncos throw the ball:

Before the season started, this matchup would have been a no-brainer – Peyton Manning against a mediocre Carolina defense wouldn’t have seemed like much of a contest at all. However, a lot has changed this season. Carolina’s defense has wildly exceeded expectations, and Peyton Manning has finally show serious signs of age, as he threw only 9 touchdowns against 17 interceptions in the regular season (although, to be fair, 4 of those picks came in 1 half against the Chiefs while playing injured). Manning has been the Broncos biggest liability for much of the season, something which few people fathomed before the year began.

However, the Broncos passing game, and Manning in particular, has been better of late. Peyton was turnover-free in both playoff games, putting up solid-if-unspectacular stat lines against both the Steelers and Patriots. And if Manning is on on Sunday – well, Demaryius Thomas and Emmanuel Sanders are a terrifying receiving duo, capable of decimating any secondary in the league.

Carolina has been a very good, although not great, team against the pass this season, ranking 11th in the league for yards allowed, 2nd in yards-per-attempt, and 7th in touchdowns allowed. Josh Norman is an elite cornerback, but the Panthers are down to replacement-level talent at their other corner position after Charles Tillman’s season-ending injury. However, Carolina has an excellent pass rush, as their unit generated 44 sacks on the year, good for 4th in the NFL. That should give the Broncos young, inconsistent offensive line enough trouble to give the Panthers an advantage here. 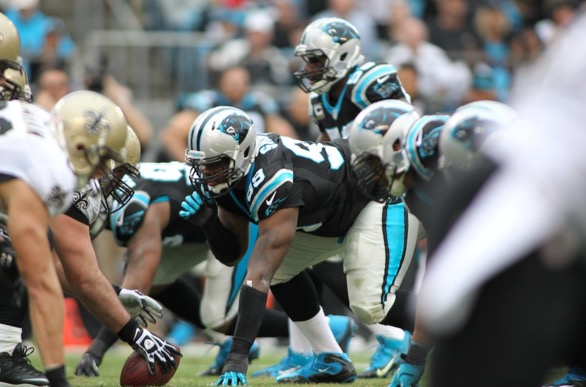 -When the Panthers run the ball:

This is arguably the most strength-on-strength matchup of the entire game, as it pits the Panthers excellent, innovative run attack against the Broncos historically great defense. The Panthers ranked second in the NFL in rushing yards per game, as Jonathan Stewart, Cam Newton, Mike Tolbert, and Co racked up an average of 142 yards. Carolina faced 2 excellent run defenses in the Seahawks and Cardinals in their last 2 contests, and rushed for more than their season average in each game.

On the other hand, the Broncos have an extremely formidable run defense, despite pass rushers Von Miller and Demarcus Ware, and corners Chris Harris and Aqib Talib getting most of the attention. The Broncos defensive interior core of Derek Wolfe and Malik Jackson is amongst the best in the league, and quick, rangy backers like Danny Trevathan and Brandon Marshall can attack the line of scrimmage and stretch plays horizontally with ease. The Broncos ranked third in the NFL, allowing 83 yards per game, but even that statistic underrates this defense – the Broncos led the league in rush yards per attempt, holding teams to 3.3 yards per carry. With an obvious advantage in the pass game, the Broncos will likely stuff the box, spy Cam Newton, and dare the Panthers to run.  This is a tough matchup for both sides, and there is no clear advantage. 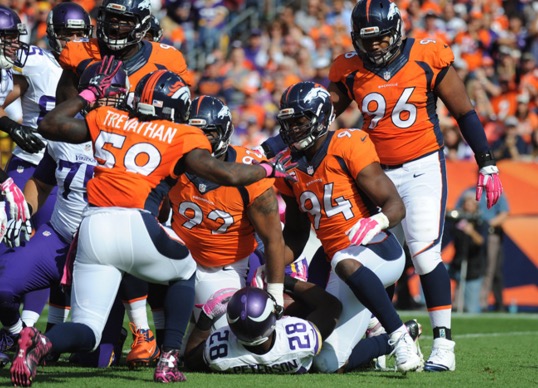 -When the Panthers throw the ball:

Cam Newton won the MVP award this season for a reason. He’s always been an elite runner at quarterback, but this season, Cam greatly improved throwing the football, even without the services of nominal #1 receiver Kelvin Benjamin. However, Ted Ginn, Corey Brown, and the rest of the Panthers largely-anonymous receiving corps got the job done. While the Panthers certainly didn’t challenge any pass yardage records, they were very efficient, as Newton threw for 35 touchdowns against just 10 interceptions.

On the other side of the ball, the Broncos have one of the best pass defenses in recent history. Aqib Talib, Chris Harris Jr., and Bradley Roby comprise the best cornerback unit in the NFL, while Von Miller, Demarcus Ware, and Co. combine for the most fearsome pass rush in the league. The Broncos rushers gave quarterbacks nightmares all season long, destroying Tom Brady in the AFC Championship, while the secondary locked down opposing wideouts (well, those not named Antonio Brown) without exception. The Broncos pass defense is an exceptional unit all around, and one that Carolina will struggle to beat.

Both teams boast decent kickers, with a slight edge going to the Broncos’ Brandon McManus, as he has a stronger leg than Graham Gano. McManus led the NFL in field goals over 50 yards in length, and he also has a slight lead over Gano in conversion percentage – 77% to 78% – on the season.

The Broncos also have an advantage at punter, where Britton Colquitt continues to be one of the league’s best. The Broncos ranked 6th in yards per punt and 3rd in punts inside the 20, while Carolina and punter Brad Nortman ranked 10th and 11th, respectively.

All told, nothing here stands out a ton, but Denver has a slight advantage. 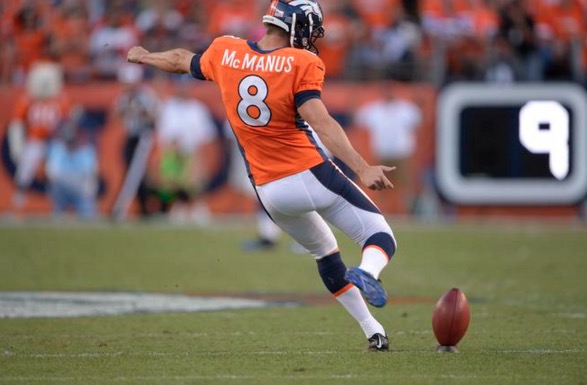 Both coaches – the Broncos’ Gary Kubiak and the Panthers’ Ron River – have won the Super Bowl…but neither as a head coach. Kubiak has won three ‘ships – as an assistant coach with the 49ers, and twice as the Broncos’ offensive coordinator during the John Elway era. Rivera won his ring as a member of the legendary 1985 Chicago Bears.

Neither head coach has much playoff or Super Bowl experience as a head coach; however, both men are greatly respected as leaders, and they both seem up to the task. There’s no clear advantage here. 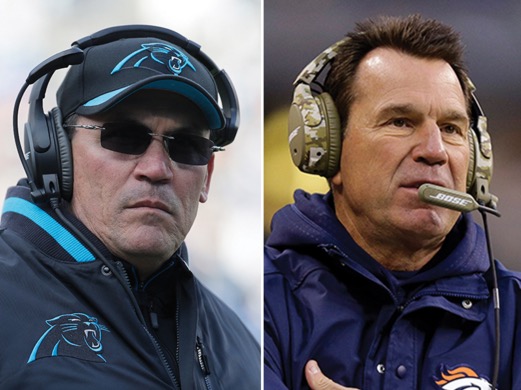 Cam Newton and the dabbing or Peyton and his last rodeo? Yes, I’m a Broncos fan…but is there any way the football gods don’t end Peyton’s insane storyline this year with a Super Bowl ring and a ride off into the sunset? One of the game’s all time greats deserves it. Cam will have years to win a championship – this is Peyton Manning’s last stand, and fate should reward it. 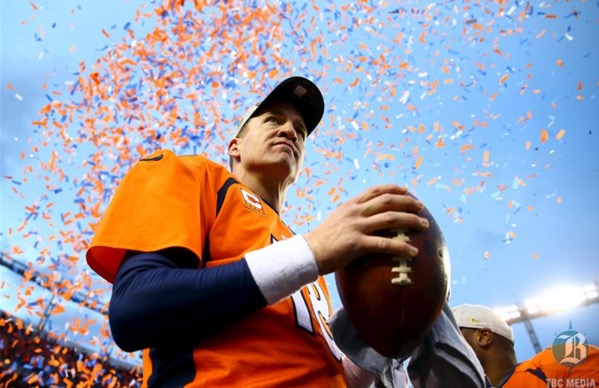 This will be a low scoring, hard-fought, physical battle. I think if either team scores 20 points, it damn near guarantees them a win. Look for time of possession, turnovers, and third down conversions to dictate the game.

And in the end, I think Denver’s excellent defense does just enough to give the Broncos another narrow, heart-pumping win. 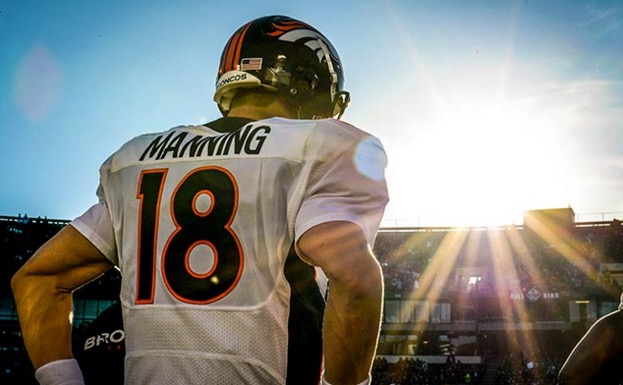