Posted On April 7, 2014 By Ascher Robbins In Gambling Life, Sports

UConn vs. Kentucky: Picks & Predictions for the National Championship

I feel pretty damn good about myself. On Saturday, I went 2-for-2 picking the winners, and missed covering both games by half of a point in the Kentucky-Wisconsin nightcap. UConn blew by heavily-favored Florida, and Kentucky eked out a one-point thriller of a victory against Wisconsin. And while I might have picked the winners correctly in those two games, neither myself nor anyone else in their right mind had this matchup for the National Championship: 8-seed Kentucky versus 7-seed Connecticut; the sum of the two teams’ seeds, 15, is the highest in the history of the Big Dance’s finale.

So who wins the whole shebang tonight? It’s anyone’s guess. But for what it’s worth, here’s mine.

At it’s core, tonight’s matchup is a classic study in contrasts. UConn is led by a trio of veteran, experienced upperclassmen. Kentucky starts five freshmen. UConn is coached by Kevin Ollie, who is guiding the Huskies through his first NCAA Tournament. Kentucky is led by John Calipari, who’s coaching the Wildcats in his 15th tourney appearance. UConn is powered by gritty, heady guard play. Kentucky is predicated on size and dominant big men (although Aaron Harrison is doing his best to change that narrative). 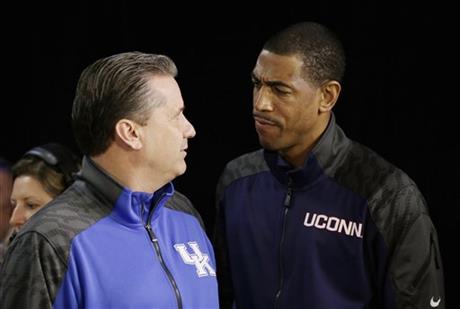 The experience gap between John Calipari and Kevin Ollie is enormous.

So which style will prevail?

We’ve all heard the sacred adages of March Madness regarding the importance of experience and great guard play. If we’re to focus on just these factors, and believe the talking-heads, then UConn seems to be the favorite. However, many teams in recent years, including Calipari’s 2011-2012 Kentucky squad, have proved that teams of inexperienced freshmen with ample raw talent are more than capable of cutting down the nets.

This Kentucky team was the preseason #1 for a reason; they’re big, they’re powerful, and they’re freakishly athletic. It took the boys in blue a while to put it all together, but the Wildcats have finally figured it all out – and now, they have a noticeable confidence and swagger to complement their unmatched natural talent. Plus, I’m not sure there has ever been a tougher road to the National Championship game than the one that the Wildcats had to travel – Kansas State, Wichita State, Louisville, Michigan, and Wisconsin were ALL top-50 BPI teams on the season, and all but K-State were in the top-20. The Wildcats have navigated their way through an unbelievably brutal tournament slate with poise, and have done a lot of growing up on the way. That experience combined with their innate ability makes for a dangerous team. 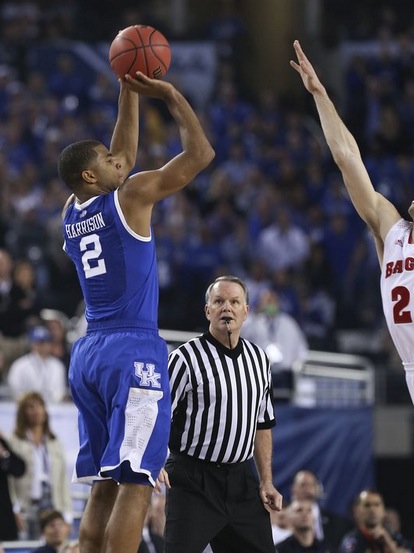 Aaron Harrison’s clutch shooting has added another element to a dangerous Kentucky team.

…But UConn ain’t exactly a pushover. What the Huskies have is a veteran group led by standout point guard Shabazz Napier, who was a freshman backup in 2011 when he watched a certain Kemba Walker ball outta his mind in March and April, leading the Huskies to a National Championship. Napier is more than capable of following in Kemba’s footsteps, and has been the best player in the country for much of the tournament. It doesn’t hurt that he has studs like Ryan Boatright and DeAndre Daniels to shoulder some of the load when opponents do everything possible to slow Shabazz down. This UConn team has had an up-and-down year, but when they’re up, they’ve been unbeatable. What the Huskies did to the consensus best team in the country, Florida, on Saturday was no fluke. Connecticut is for real. 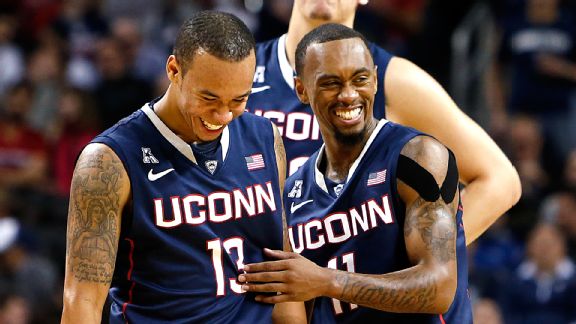 Well, I could easily see Kentucky being too big and too strong for the Huskies to handle. But I could just as easily see inexperience getting the best of the Wildcats, forcing them into sloppy errors on the biggest stage. I could easily see Calipari out-coaching the relatively green Ollie. But I could just as easily see Napier and Boatright greatly outplaying the Twins Harrison. Through and through, this is an even matchup, with two contrasting styles and attitudes colliding. And when in doubt, I have to pick the less volatile team. Shabazz channels his inner-Kemba one final time, and experience beats talent.