Posted On June 1, 2016 By Basic Becca In Television

I was faced with a dilemma last night: Game 7 of the Western Conference Finals or the second episode of The Bachelorette. I obviously chose to watch my future husband Klay Thompson play an incredible game of basketball and saved JoJo and her boys for another time. Now that I’m caught up and the Warriors are going to the championship, I can share my insight on the second episode which was almost entirely comprised of Chad being honest and talking about protein.

JoJo’s first group date of the season takes place at a Fire Academy where the selected contestants go through firefighter training; this way JoJo will be able to determine who can keep her safe in an emergency (blehhh). Fortunately for Grant and unfortunately for everyone else on the date, he is a career firefighter. Wells, the scrawny radio DJ, might weigh less than the suit and gear. He almost dies, but stays alive because JoJo asks him not to faint. War veteran Luke and firefighter Grant are neck and neck for most of the challenge, but Grant ends up winning the date; however, Wells’s near death experience earns him the rose. Grant gets some extra one on one time as a result of his victory; he uses the time to remind JoJo that he risks his life every day on the job and may never come home from work one day. Comforting. 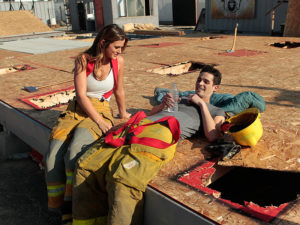 My favorite part of the Fire Academy date was the footage of the men who were not asked on the date. Chad was doing pull ups while wearing a weight belt. What was attached to the weight belt, you ask? Oh nothing, just his suitcase full of protein powder. “That’s like meathead to the max,” said one of the men who had no idea that max-level meathead had yet to be achieved. While Chad shared an intimate moment with his suitcase of protein filled jars, the rest of the dateless men wrote a song for JoJo. I’m usually not very good at picking up lyrics from only one listen, but I think I have this song down. “JoJo, where’d you go-oh? Jo Jo-oh, Jo Jo-oh, Jo Jo-hhhhh!”

Love is Full of Choices

Derek gets the one-on-one date this week and gets to make a series of choices with JoJo to plan their date one step at a time. This sounds like a nightmare to me as my usual response to questions involving planning is “I don’t care” or “whatever you want.” Together they chose Sky, North, and Golden Gate Bridge. Neither of them had ever been to the greatest city in the United States, and they definitely made the right choice choosing the bridge over Lombard Street. Derek and JoJo hopped on a private plane and flew up the California coast. They had a wine picnic by the bridge, likely realized that the San Francisco Bay is not a warm place, and headed off to dinner to discuss past relationships. Sounds like most of my weekends, to be honest. Derek is sweet and boring; he gets a rose.

Prove Your Love to Me and the Nation

Group date number two lands a handful of the contestants at the set of SportsNation, an ESPN show. The hosts, Max and Marcellus switch over to BacheloretteNation mode and run the guys through some challenges before offering up a power ranking. What better way for a woman to find her husband than have two men that don’t know her rank her boyfriends based off football celebration dances and press conferences? I can’t think of anything better. 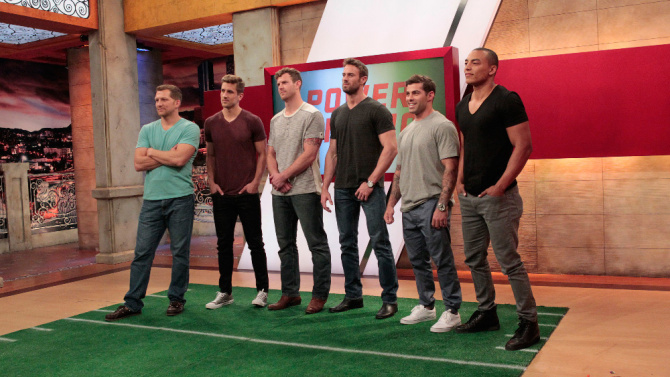 Guess which one is Alex

One major upset of this portion: JoJo called Steph Curry “pretty decent” while her show was airing at the same time that Steph was busy winning the Western Conference Finals. JoJo upset me with this one; I feel wronged by a fellow Baylor Bear.

Chad was the star of this date. He half-heartedly participated in the games and talked about how immature the other men were for the entire episode. He called JoJo “naggy” when she asked him to list the things she loves about him and was unanimously chosen by his competitors as the guy JoJo should not pick. Chad gained a few points with me (much needed giving his negative score at the moment) when he explained at the fake press conference that he doesn’t know if he loves JoJo yet– they just met! He wants to get to know her before fawning all over her like the rest of the guys (major shade thrown). Alex, the short Marine, was given third place in the power rankings; Chad, second; James Taylor, first.

James Taylor 2.0 wrote JoJo a very sweet and heartfelt poem, she cried, he got the rose. Chad opened up during his alone time with JoJo and shared that his mom had passed away six months prior to being on the show. Chad is very obviously falling for JoJo harder than he expected. It seems to me that he expected JoJo to fall for him the moment he decided to invest in their relationship, and James Taylor receiving the rose does not give Chad the validation he clearly needs. As much as this dude frustrates me, I think there is more to him that his protein obsession and pretentious attitude.

My notes: Chad waited for JoJo before she went in the house; everyone was mad. Chad interrupted Alex and JoJo; everyone was mad. Chad can’t stop eating deli meat; everyone else can’t stop talking about Chad eating meat. Chad gets confronted by the guys for the millionth time that night; he compares them to the group of snapping dudes in West Side Story. Chad eats lunch meat during the rose ceremony. Chad chews with his mouth open. Chad is not seen without a piece of meat in his hands or mouth the entire cocktail party. Tiny Marine Alex and his posse are more obsessed with Chad than JoJo. (Dateless Chase made a mini-date for JoJo and it was adorable).

In the words of my new favorite meathead, “I will not write her a song about how much I love her. I’m gonna keep having protein shakes, keep workin’ out, and keep eatin’ food.” I love what you bring to this show, Chad.

Next week there is a two night special, and I can’t believe I’m dedicating that much of my week to this show. Clear out your calendars for Monday and Tuesday night. Maybe next week I’ll just make an entire post of Chad .gifs.