Posted On August 22, 2017 By Cat Hausler In Music, Shows, Uncategorized

Global Dance Festival (GDF) celebrated its 15th anniversary at a new venue – the parking lot in front of Sports Authority Field (home of the Denver Broncos). Despite the new location and overall new vibe, the festival wowed thousands of attendees, yet again.

While Red Rocks is one of the most beautiful and acoustically perfect venues in the world, it’s understandable why a festival like Global would look elsewhere in order to expand. At the new location, GDF was able to sprawl across flat land, adding large and impressive art installations, carnival rides and more vendor booths than in previous years.

The art installations helped to set a true multi-day festival scene. My favorite piece was a large owl, made out of some kind of metal, wings outstretched. At night, they lit fire behind the owl, giving it an ethereal glow. While I don’t get the appeal of carnival rides at festivals (EDC Vegas included), adding them for GDF 2017 was a hit. Attendees’ faces lit up as they zoomed around on various amusement contraptions. 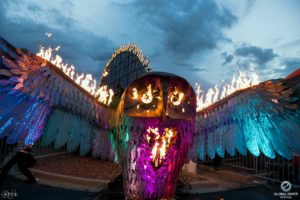 Outside of the aesthetic of GDF 2017, the music impressed as well. Fairly new to the scene, Louis The Child was the first set I caught on Friday night of the festival. Despite the young ages of both members of the group, Louis The Child played a unique set that kept the audience hooked. Former reigning King of EDM Hardwell was on next and played banger after banger to a hyped crowd. The set reminded me of all the reasons I initially got into the dance music scene. But the true high point of the night was Kaskade closing the main stage. From start to finish, Kaskade (a Colorado favorite) had the audience captivated. From the beautiful visuals of soaring landscapes and the cosmos, to his song selection, Kaskade’s set was a perfect way to end night one.

Night two of Global was filled with progressive house and big room sets that kept attendees dancing like crazy. Lost Kings threw down a set that was much harder than I expected, only peppering their floaty, feel good songs in with heavy tracks. 3lau and Deorro followed suit on the main stage with two more high energy sets that played to the crowd. One of my favorite performances of the night took place at the smaller, Northern Lights stage. The ever elusive and mysterious Zhu played to a full house, mixing his original music with the likes of “Thriller” by Michael Jackson and then flipping the script to drop RL Grime’s trap hit “Core.” Porter Robinson closed the main stage on night two with a beautifully disjointed set that showcased his music and stayed true to his style.