Posted On June 18, 2014 By Cat Hausler In Music, Sports, Uncategorized

NOTE: This post was co-written by Writtalin contributors Cat Hausler and Sophie Tahran. The two are besties and life-long festival buddies.

It’s been four weeks to the day since we started on our journey to Sasquatch. No, we’re not talking about going on a quest to find the giant, furry monster that supposedly haunts the Pacific Northwest, but the epic three-day music festival that stole our hearts.

This year’s Sasquatch was our first, and after the amazing time we had, it most likely won’t be our last. Here’s a breakdown of Sasquatch 2014. 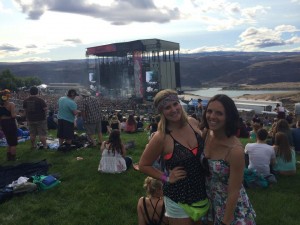 What- A three-day music festival that features a variety of musical genres including, hip hop, EDM, folk, country, pop – really anything you can think of.

Where- The Gorge Amphitheater outside of Quincy, Washington. As someone (Cat here) who frequents Red Rocks in Morrison, CO, I hate to admit it, but The Gorge is the most beautiful venue I’ve ever been to. The main stage looks out over the Columbia River as it winds along the foothills of the Cascades. Another perk of the venue is its size. The area of Sasquatch isn’t as sprawling as bigger festivals like Coachella, so it’s easier to get from stage to stage. 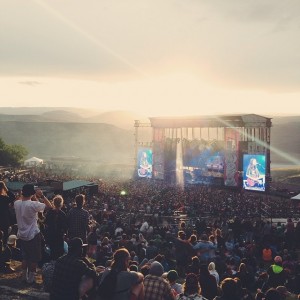 The Main Stage at The Gorge at sunset

When- This year, LiveNation (the company that puts on Sasquatch) announced that there would be, for the first time in festival history, two weekends with separate lineups- Memorial Day Weekend and 4th of July Weekend. However, due to poor ticket sales, LiveNation canceled weekend two. But weekend one went on as scheduled May 23-25.

Our Favorites From This Year:

1.) Kid Cudi – As someone who was in college when Kid Cudi first got popular, I was apprehensive about seeing him years after “Day N Night” and “Pursuit of Happiness” were at their peak. His more recent albums have been more mellow than his first couple and I was worried that his performance might be boring. I was so wrong. Kid did not miss a beat from the second he stepped on the main stage at Sasquatch. He played a variety of songs, while still pleasing the audience with his hits, and kept the energy high even during his slower songs. Kid closed his Sasquatch set with Pursuit of Happiness, performing the original version first before letting the Steve Aoki remix play as he jumped around with the crowd. I will also note how pleasantly surprised my girlfriends and I were to find how attractive Kid is… Just sayin’. 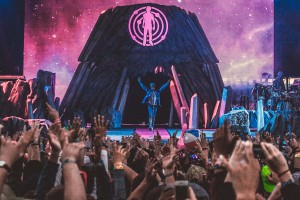 2.) HAIM – Any person who says “girls can’t rock” (aside from being arrogant and stuck in the 1950s) has clearly never seen HAIM. The band, made up of sisters Este, Danielle, and Alana Haim, and drummer Danny Hutton, rocks hard. The sisters keep their sets fresh, interacting with the crowd and play songs that range in sound from 70s rock to folk to R & B. Their set was maybe the most fun at Sasquatch. The sun was setting as they played the main stage, creating a golden, heavenly glow and Este sparred with the crowd in between making her signature “bass face.” HAIM is definitely on the up and up and I encourage all of you to see them. 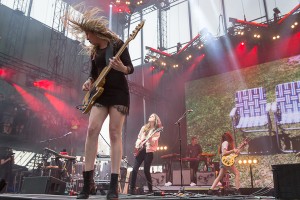 3.) Honorable Mentions– Major Lazer, First Aid Kit, and Ryan Hemsworth. It was hard for me not to put Major Lazer as one of my top two performances at Sasquatch solely because of my obsession with Diplo (a member of Major Lazer and DJ in his own right). But the DJ trio definitely did not disappoint, throwing down dirty trap beats and house anthems. Go see Major Lazer if you get the chance. First Aid Kit is a Swedish Folk group made up of sisters Johanna and Klara Soderberg. I’d not heard of the group until going to Sasquatch, but I’m so glad I’m now acquainted with them. These girls have angel voices and make me want to say goodbye to real life, grow my hair out and become a folk singer. Ryan Hemsworth has a sound that is indescribable, but it’s awesome. The Canadian DJ is backed by names like Baauer and is sure to make waves in the EDM scene.

1.) Lucius – Going in to Sasquatch, I had no idea who Lucius was. Thanks to the close proximity of all of the stages to one another and the friendly crowds, it’s easy to hit up a number of shows that conflict on the schedule. So, we ended up at the tail end of Lucius’ set on our way back to the main stage. Lucius is made up of five members, notable two female lead singers who look like blonde twins styled by Johnny Depp’s Willy Wonka. The two met at the Berklee School of Music, and have since been touring as part of a band that The Guarian describes as “the missing link between Arcade Fire and Haim.” The band threw down, head-banging their blonde bobs and riling the humble crowd into a dancing mob. I never thought I’d say this, but I hope to have much more Lucius in my life. 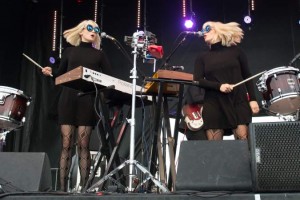 2.) Phantogram – In the spirit of full disclosure: I. love. Phantogram. They always kill it. After seeing them at the Treasure Island Music Festival in San Francisco last year, I’ve been hooked. It’s mostly because of lead singer Sarah Barthel’s badass-ery, and partially because I love watching the crowd get blown away by the show. Most people don’t expect them to run it like such rockstars. Favorite moment of the ‘Squatch set was when the lead singers commanded the crowd to turn around and take in the breathtaking sunset over the Gorge, then immediately demanded that we turn back to her show. Yes, ma’am!

3.) Honorable Mentions – Tune-yards, PAPA, Tycho. If you ever have a chance to see any of these guys, go. The Tune-yards make sounds that you’d never realize a human being could make (in the best possible way), and their sporadic choreography will bring a smile to your face. PAPA brings great vibes and hilarious stage commentary (“It’s a little strange singing to this crowd when some of you are walking around with a giant flag that says ‘Sit On My Face’ on it”). And Tycho will lull you in to a set that’s somehow really beautiful, and a great change of pace during the madness of a festival.

Overall, we had a great time at Sasquatch, but here are the things that we would change if we could.

Sasquatch is a lot smaller than the big-name festivals out there. That’s both a great thing, and a kind of scary thing. Because there isn’t as much of a spotlight on it, there aren’t many rules. Security guards often join the crowds in enjoying the shows and campsites, there are minimal pat-downs and no car checks, and you can camp, park, dance, and doze anywhere your heart desires. If it’s possible to say this quote without bringing forth memories of Tobey McGuire in Spiderman, “With great power, comes great responsibility.” Stay safe, kids!

Another issue – getting to The Gorge is a bit of a chore. Though it’s close to Quincy, WA, the closest large airports are Seattle and Spokane (both three-ish hours away). My group was lucky enough to know someone who lives in Spokane, so we stayed the night with him and then drove the 2.5/3 hours to The Gorge the next day. Because of it’s location, you need to prepare before you go – get supplies, plan out enough time to drive, etc.

Helpful Tips For If You Want To Go:

Bring a flag! Campsites aren’t organized by clear numbered pathways, and landmarks are few and far between. The directions to our site were literally “We’re kind of by the rastafarian flag but like three rows back and closer to the giant RV that’s diagonal from the Oregon flag. Kind of.”

Don’t expect to shower. Lines were long, so we opted for a random faucet near one of the bathroom areas. Throw on a swimsuit, grab some empty water bottles, and bathe with pride!

Get a locker. Weather fluctuates wildly, so you’ll be hot one minute, and surrounded by winds the next. Large scarves and jackets will be your best friend!

Be organized. As we mentioned previously, Sasquatch isn’t close to any major city, so you need to be organized with what you take. Camping is included in the ticket price. Because of this, you have to bring food, water, toiletries, camping gear and all that jazz with you. We rented all of our camping gear from REI for a fairly reasonable price and went to CostCo and Walmart for our food.

We loved our Sasquatch experience and we encourage all of you to give it a chance too!!!

How to Compose Cheap Essays