Posted On March 27, 2014 By Cat Hausler In Artist Interviews, Music

I start to panic when my friend and I walk up to Beta Nightclub in Denver. My interview with EDM veteran Fedde Le Grand is supposed to start in seven minutes and I still have to get through a long line of eager ravers. It takes some time and I get some questioning looks when I tell door people and bouncers that I’m here to do an interview with the headlining DJ, but we finally get inside and get let into the Green Room. It’s empty.

So here we are, sitting, waiting for one of the biggest EDM producers out there; a guy who has been known in the dance scene for the last decade; someone that I saw with thousands of other EDM enthusiasts at the Sahara Tent at Coachella last spring. I feel calm as I wait, but when it’s Fedde that walks in first, his crew in tow, I can’t help being a little starstruck.

Fedde Le Grand has been a staple in the dance music scene since 2006, when he released “Put Your Hands up for Detroit,” he has played some of the biggest festivals in the world (Ultra and Coachella, to name two) and he’s collaborated with a veritable roster of EDM legends. With so much success, I’m worried that the Dutch producer might not be thrilled to talk to me less than an hour before hitting the decks. But I’m immediately proven wrong. Not only is Fedde willing to chat with me, he seems eager to answer my questions.

The DJ’s answers are thoughtful and insightful, giving depth to a genre that has been branded “mainstream” and “commercial” by many.

“How was Surrender?” I attempt at smalltalk as I’m setting up my recording device and getting myself together for the interview. I know he played at the Encore club in Vegas the night before.

“Good fun!” Fedde’s tone is light. “We ran into a really, really old friend of mine. He runs a couple of clubs and he’s kind of the first person that gave me a job. So yeah, it was really fun.”

I finally have everything set up and dive into the questions I’m really here to ask. 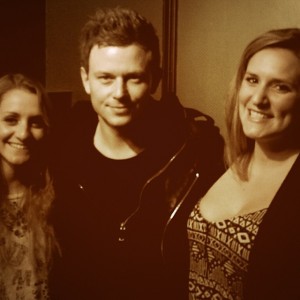 Fedde Le Grand:   I’m not sure that I have one track specifically, but I really like what Bruno Mars is doing. I think it’s so different from anything else and I like the whole style of the things he does. I thought his performance at the Super Bowl was absolutely awesome.

Cat: Because not all of our readers are particularly familiar with EDM, could you give me a little bit of background on your career? How you got into EDM, how you got your start, that kind of thing.

Fedde Le Grand: I got into EDM before it was called EDM, so a long time ago.

For me it kind of started with doing my own label and doing my own parties back in Holland. I already had quite a good career in Holland before I went international. But I knew when I made the track “Put Your Hands up for Detroit,” that that was kind of the start of my international career. Back then, it spilled over to America, but it wasn’t Top-40 material here yet. Back then, I don’t think radio played any dance-related things at all.

But there was a good scene in the US already, so I came over here a lot. My next big things were the Coldplay remix I did and “So Much Love.”

Cat: Again, for our readers that aren’t that familiar with dance music, how would you describe your sound?

Fedde Le Grand: I think in my case, it’s a little bit different. The way I see it – you kind of go through different phases, and I think it’s important that you keep evolving and not stick to the same five sounds your whole life.

But I think usually my tracks have a very forward drive. And, as of late, my sound has become very melody driven. And I always love doing vocal tracks.

Cat: You kind of touched on this already, but you’ve been in the dance music industry for quite a while now – how would you say it’s changed since you dropped “Put Your Hands up for Detroit” in 2006?

Fedde Le Grand: Obviously a lot has changed. In my opinion, every two years, something new pops up. So that’s a general change. But I think the biggest change is American pop artists getting interested in dance music. I think that has had a huge, huge impact on the world.

Before that, you had Madonna, who already did dance music a little bit. But I think of David Guetta and the Black Eyed Peas in the beginning, just embracing dance, that just made such a huge impact. And that has had an effect on the world. EDM is just big worldwide now.

I think that’s the biggest change. And with a certain genre getting really big, it will automatically get more commercial. But I think the good thing about dance music is that it has such a solid underground base and it always has. Because guys like Carl Cox, Richie Hawtin – they’re still huge as well. So I have to say, in general, I’m quite happy with everything that has happened.

But it’ll be interesting to see what happens from here because I think EDM is at its peak now, maybe a little over already. I don’t think it’s going to disappear overnight. To be really honest, the first dance tracks that crossed over into pop, I didn’t like that much. But I think now, I personally quite like what Avicii is doing and I think Calvin Harris is doing a lot of really good stuff as well. As long as there’s good music, this scene and this music genre will stay strong.

Cat: I did an interview with Dyro last month – and of course, you and he and a number of other extremely successful DJs are Dutch. What do you think it is about The Netherlands that breeds EDM producers?

Fedde Le Grand: I think the fact that we’re such a small country is to our advantage actually, because we all know each other. I actually signed one of Hardwell’s first tracks. And me in my turn, I used to work in Tiesto’s record store. So we all kind of know each other.

And we share information at the same time. When one person gets better, we kind of all get better because we share information, and we’re not too afraid or in too much competition. I mean, in a way, you’re always in competition, but we’re pretty easy and friendly about it, so I think that’s why it works to our advantage.

Cat: Your music label, Flamingo, boasts a lineup of very young artists that are doing immensely well – what do you look for in artists that you’re looking to sign?

Fedde Le Grand: Of course there’s a certain quality that has to be there, but mainly I’m looking for people that aren’t afraid to stand out. I think Deniz Koyu has a very specific sound and he’s done very well. I signed two guys named Roul and Doors that kind of do a thing between old school housey stuff and EDM. I just think it’s really good and different. I think at the moment, there’s too much of the same. So everything that’s different, and still really good – that’s what I like to sign.

Cat: Talk to me about your radio show, “Dark Light Sessions.” Why do you like doing it? Where do you get your inspiration?

Fedde Le Grand: Before this, I used to do a radio show in Germany actually. That did very well, so this was kind of a natural thing to spin off of that. In a radio show, you’re not playing in front of an audience so you can go a little wider. That’s why I call it “Dark Light Sessions” because I want the songs to go from underground stuff to the songs that people expect from me. It’s a way to show myself in a broader way than people would normally hear me play. Because as soon as you’re in front of an audience, they expect something. And in a way, you have to give them that. So you have a bit less room to experiment and with a radio show, you can do whatever you like.

Fedde Le Grand: I think every two years, you have to reinvent yourself and think of something new to keep yourself happy and keep your fans happy. So that’s what I did. I took a few months off to just be in the studio and really get into it. And I was actually super, super productive. I probably have enough for two years almost.

I’m dropping the album at the end of this year, so most of these singles are part of the album. I don’t really believe in releasing a whole album at once unless you do a more radio-friendly album. But I want to do both – I want to do a few radio tracks and a few solid dance tracks.

“Don’t Give Up” is the first one, the second one is called “Feedback”- the first few are all solos, then I have a few interesting collabs coming up.

*he sighs and thinks for a second*

Can I say anything about that? No—I won’t.

But later in the year, there will be more collaborations. What I can tell you is that there will be one with Dimitri Vegas and Like Mike because it’s already in the Tomorrowland after-movie. But there are some more interesting collabs to come.

Cat: You have this string of shows in the US and then you’re heading to Ultra – tell me about the shows, tell me about how you’re feeling about going back to Ultra.

Fedde Le Grand: Ultra is always one of the biggest highlights in the year. I’m really looking forward to it. Also, because I’ve been doing it for a while so it’s kind of like a home away from home – you know everyone, which is great. For me, it’s extra special because it will be a little bit of an album preview at the same time. So I’m really looking forward to it. And all the gigs before kind of lead up to that Ultra experience, which is great. Because on a tour like this, you’re just finalizing your set, doing the last little bits, doing mashups and bootlegs on the plane, just to make sure your set is complete so it’s always dynamic and vibrant. It’s cool. 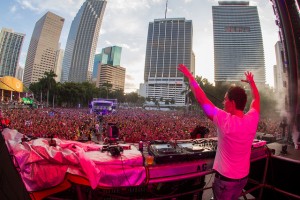 2014 is sure to be a big year for Fedde Le Grand. He plays at Ultra on Sunday and will continue to tour around the globe after that. His set at Beta last week was fresh and unique and I urge you to see him if you get the chance.

Check out his latest release “Don’t Give Up,” here: