Posted On December 4, 2015 By Ascher Robbins In Lifestyle, Manzone

In addition to all of the things I’m usually thankful for around this time of year – my family, my friends, my health, and so forth – I was uniquely thankful for my friends at Mercedes-Benz this holiday season.

That’s because for one special week this Thanksgiving, Mercedes-Benz was nice enough to grant me the incredible privilege of driving a Mercedes-Benz S550 4Matic home for the holidays.

Driving this incredible luxury car was truly a life-changing experience. I’ve always loved luxury vehicles – I mean, who doesn’t? – but I’d never had a chance to get behind the wheel of a car quite as incredible as this one. It was love at first sight. Here are my thoughts on the incomparable Mercedes-Benz S550. 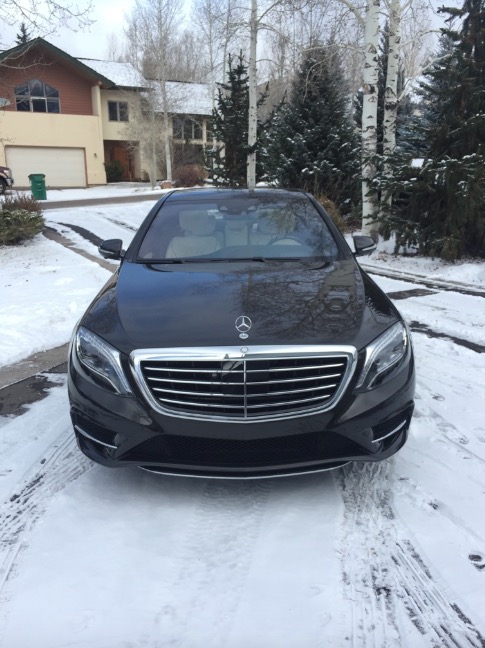 I’ll be honest – when I got behind the wheel of the S550 for the first time, I had no idea what I was doing. I received no instructions on how to use the car, and it took me a few days to figure out that the owner’s manual is an electronic version stored on the car’s infotainment screen. I drive a Honda Accord. I’m used to having a car with a transmission in between the driver and passenger seats. Not so with the Mercedes-Benz S550.

I pressed the keyless ignition to start the car – that part wasn’t too hard to grasp – and then sat perplexed in my parking space as I tried to figure out how to put the beautiful thing in reverse. Finally, after accidentally turning on every contraption from the windshield wipers to the turn signals and everything in between, I got the hang of it. The S550’s transmission is controlled on the steering wheel. While this was kinda disconcerting at first, as I drove throughout the week, this feature became more and more convenient. The S550 is all about simplicity; all about making your drive as distraction-free and pleasant as possible. More on that in a second.

As soon as I put the car in reverse, I was impressed. A 360-degree camera view appeared on the onboard display, giving me an unprecedented view of my surroundings as I backed out of my space. If you ding anything in this car, you must REALLY not be paying attention; with this camera and native crash-detection sensors, you know for certain if you’re getting close to any moving or stationary obstacle.

I backed out unscathed, and switched the steering wheel transmission toggle into drive. That’s when the real fun began. The Mercedes-Benz S550 has an incredible onboard infotainment system that can do damn near anything you could ever dream of, but again, the S550 is all about ease and convenience. Instead of having to navigate by this screen, the S550 takes navigation one step further. As soon as I was moving forward, a hologram appeared, subtly, on the bottom of the windshield. 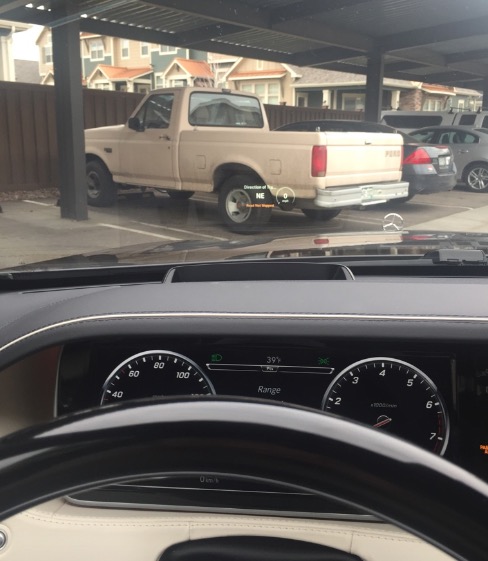 This doesn’t really do it justice.

This handy graphic told me my speed, direction, route, and location at all times – no need to take my eyes off the windshield for any reason. This was one of my favorite features; thanks to this hologram, I was able to drive in a more safe and focused manner than I’ve ever been able to. Side-view mirror sensors also were clutch, alerting me when it was safe to change lanes, sensing the traffic around me perpetually. After I got the hang of driving the car, with my route programmed, it was time to play with the Mercedes-Benz S550’s incredibly amazing features.

There is very little that the S550 can’t do. Name any feature you’d ever want in a car – other than affordability, perhaps – and this ride has it. From the center console and onboard screen, I was able to make my drive the epitome of luxury. The seats give you a massage. Really. The seat-heaters and climate control self-regulate, according to the temperature. The S550’s heat and air-conditioning work as a thermostat of sorts, sensing how hot or cold the interior of the car is, and adjusting automatically. In driving this car, I never once touched the heat or air conditioning toggles – the temperature was always amazingly perfect.

In addition to the massage, I was amazed by the driver’s seat in general. If I took a sharp turn, the seat would literally hug my side on the side I was leaning towards, ensuring I stayed perfectly centered. It was incredible; the responsive seat made certain that a game of single-player “jello” was impossible. Furthermore, in addition to seat heating, the S550 has seat-cooling; tiny AC ducts in the leather seats would cool off my butt and back before I could even sweat. It was the most comfortable drive I’ve ever had in my life.

The interior of the Mercedes-Benz S550 was beyond impressive – classy, luxury leather and wood finishes adorned every surface. Interior lighting could be customized in terms of color, brightness, and so forth. I particularly liked the purple lighting at night, it looked downright sexy.

And then, there were the features you’d expect, although it doesn’t make them any less convenient and impressive. The navigation was spot-on. Bluetooth allowed me to make calls and play music without having to touch my phone. And boy, the audio system was impressive – I heard subtleties in my favorite songs that I didn’t know existed. Driving this car was a blast, and I’ll get to its actual driving performance in a moment, but the cabin of the Mercedes-Benz S550 was arguably the most impressive part of the car. I was blown away. 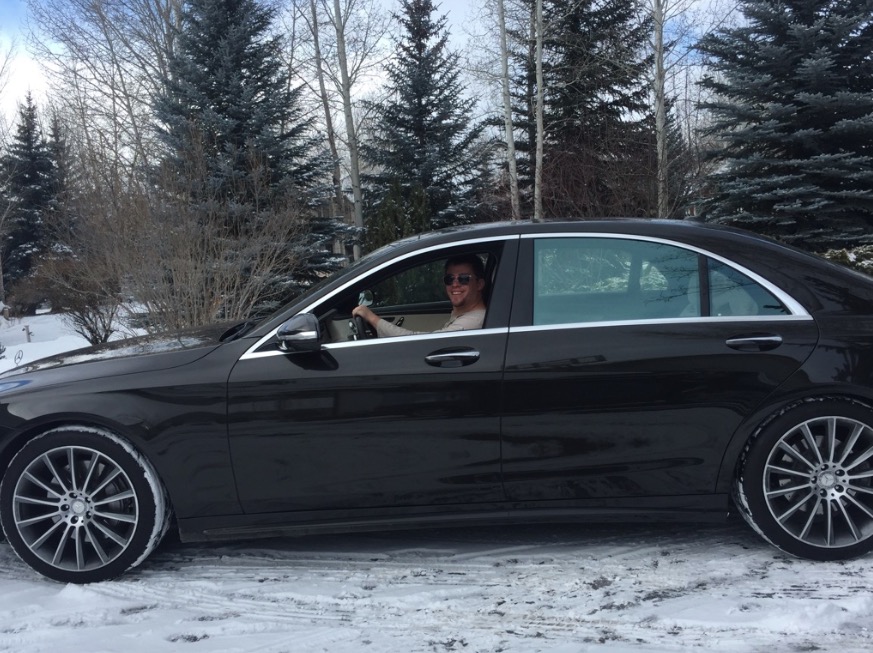 So yeah, now for the actual driving, which is probably an important thing to discuss. As I mentioned, my usual ride is a Honda Accord. I won’t get into specifics of how fast this thing can go – some details are better kept private from your sponsors 😉 – but let’s just say the acceleration was incredibly impressive. Mercedes says the S550 can do zero to sixty in just over four seconds, and, having never driven a car with that kind of performance before, I was amazed by the power. With 500 horsepower and a 7-speed automatic transmission, this car can go F-A-S-T. If you want a little more control over the transmission, paddle shifters give you the ability to quickly change gears.

For a fast car, the fuel economy was pretty impressive as well. With an estimated 17 city/26 highway miles per gallon, the S550 didn’t burn through fuel too quickly. The dash makes sure you know how much fuel you’re burning, though, as graphics constantly alert you to how many miles you’re getting to the gallon, and the range you have before hitting empty.

All in all, the best way that I can describe the Mercedes-Benz S550 is this: it was like driving a limousine with the power of a race car. This was the smoothest, most comfortable ride I’ve ever had, even when cruising on the freeway. You could be going 150 miles per hour in this car and I’m pretty sure you’d hardly notice.

I’m thankful for Mercedes-Benz for giving me this opportunity this holiday season, and if I ever have $100,000 to throw around, I know what my first purchase will be. Until then, this love story will have to be one of the unrequited variety. 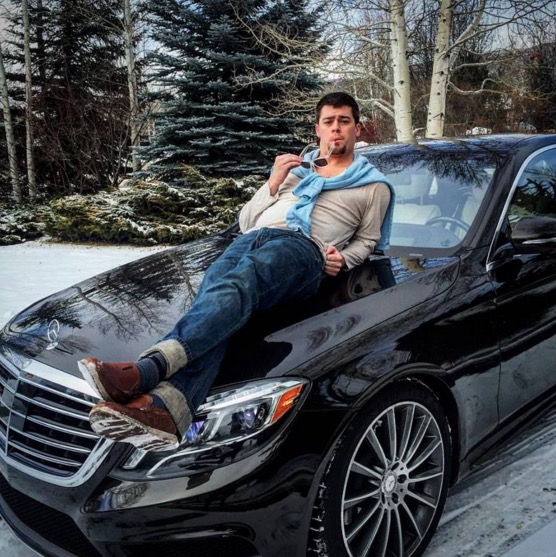