5 Badass Things You Can Teach Yourself

It’s kind of normal for most people to, at some point in their life, want to be more badass…and have no idea where to start.  This point probably comes between playing Call of Duty and surfing Pinterest, but have no fear, this is your beginner’s guide to backyard badassery.

How to throw a tomahawk 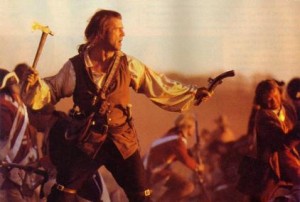 First off, the difference between a tomahawk and a hatchet is pretty big because they have different uses.  A tomahawk is lighter, has a smaller blade, and usually has a spike or some other shape on the side opposite the blade.  A hatchet looks more like a small ax.  You can throw either, but the tomahawk is better-balanced and flies better.  You start by having a satisfying target to sink it into.  A tree or a redcoat works best, however hay or the wall in your bedroom will suffice.  Stand some distance away from your target – no closer than 15 feet but optimally a little farther.  The idea for beginners is to throw it and have the handle do a full rotation before it hits the target.  If you can see or have a friend watch what part of the tomahawk is hitting your target, you can figure out if you need to change your distance or adjust how much you “flip” the handle when it leaves your hand.  You are going to grip the handle near the bottom and bring your arm back so that the blade is just behind your head.  Throw the blade in a straight line while flicking your wrist downward.  It’s similar to throwing a frisbee, in that the action in the wrist matters more than really pitching the tool into your target.  It’s pretty easy and most people can get it to stick within the first ten tries.  The most common mistake is throwing it really hard.

How to make safe drinking water

There are tons of ways to do this but in the recent wave of REI yuppies and “manliness” being the new black, the simple ways are often overlooked in consumerist America. 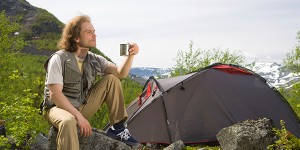 I can promise you this guy didn’t boil his water.

The cheapest, simplest, and oldest way to completely purify water is to just boil it.  I know that’s not as fun as a life straw or having special little tablets, but in the words of Patagonia founder Yvonne Chouinard “something is perfect not when you can add no more but when you can take nothing else away.”  The only other way I know of to completely purify water (you don’t always need to “completely” purify water because only certain geographic locations require full purification) is the SteriPen which is faster and much more expensive.

How to do a donut

We’ve all seen The Fast and the Furious and it should not be a surprise if I told you that in order to be a badass you must never do any of those things.  Ever. 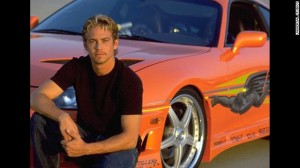 This includes posing in front of a bestickered car.

…Unless one of those things is getting it on with Jordana Brewster.  I don’t know if that act alone would make you a badass but I would advise against passing up the opportunity.  However, doing a donut is one of those things that can be found in the first chapter of the book of badassery and it’s pretty simple.  Part of it is what you are driving.  Some cars just suck.  If your vehicle has traction control, make sure it is turned off.  For rear wheel drive vehicles, you just hold the brakes and the gas and smoke the tires up real nice then let off the brakes and turn the wheel as you start to take off.    For you front wheel drive owners, there’s nothing to fear.  You can do donuts too!  There’s a neat trick you can accomplish with two restaurant trays that doesn’t look as cool but it’s a lot more fun and doesn’t cost tire rubber to accomplish.  You put a tray under each back tire by driving over and stopping on them.  Set the emergency brake and then just drive around and turn.  The car will slide though so don’t do it around people.  Or other cars.  Don’t even do it if people are watching.  It’s pretty lame in comparison to a rear wheel drive donut.

How to tie knots that work

I know tying knots doesn’t sound badass, but there’s a reason the knot everyone knows how to tie is called a granny knot and the rest are all called something else.  Time after time I see people tie multiple granny knots when they only need one.  There are many different knots and some are more versatile than others.  I will share two.  One would suffice for really any need but the other is very easy.  The first one is the American death knot (it even sounds badass) and it used to join two ends together and you literally just grab both ends so that they face the same direction and make a loop with them before passing both ends through the loop (granny knot).  The second is called a taughtline hitch and can be used in a situation where you need to adjust the tension or length of the line.  This is literally the most useful knot and it is quick as well.

There you go. All the things you learned from adults and teachers when you were little and they never taught you this.

To be able to make it a stronger knot so that it can hold more weight, just add more loops to the right side and it will create more friction.  To adjust tension or length, just grab the knot and slide it down the line.

How to make a Molotov cocktail 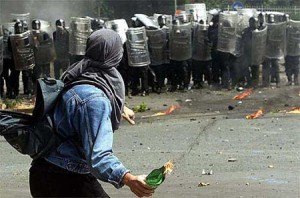 Finally you get to learn how to do something constructive.

You have probably seen this used worldwide as an instrument of protest and violence but there’s nothing about it that makes it particularly better than any other weapon other than the fact that its components are plentiful.  All you need is a glass bottle, flammable liquid, a rag, and a flame.  I first did this when I was about 10 with nobody telling me how to.  Just mix everything together in about the only way possible.  Liquid in the bottle, rag halfway in the bottle, get the bottom of the rag wet, ignite the externally hanging part, and throw at Ukrainian police or whatever opposition you deem appropriate.  3rd world revolution in a just a few easy steps.