Celebrating 21 Years of Dance Music: A Review of Skylab 2015

Colorado’s Skylab celebrated its 21st birthday in style with a two-night party that featured names like Martin Garrix, Krewella, Laidback Luke and Borgore. The event, held for the first time at the 1stBank Center in Broomfield, was a space-themed wonderland – think giant inflatable planets and satellites. Despite being held in a new venue and with the unfortunate news that much anticipated up and coming DJ Ruby Rose had to cancel last minute, Skylab still went off with a bang. 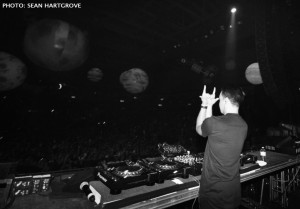 Laidback Luke – I spoke to Lucas Cornelis van Scheppingen aka Laidback Luke shortly before his performance at Skylab last Friday (watch out for the interview soon). When asked what could be expected from his set, he basically told me that he hadn’t planned it out yet, that he was going to go out there, read the crowd and hope for the best… And that’s exactly what he did.

The energy of Luke’s performance was high from start to finish. Though the set was trap heavy, Laidback Luke played everything from progressive house to rap, flowing seamlessly from one genre to the next. Luke interacted often with the crowd, but not so much so that it felt obnoxious or contrived. Overall, the set was professional and polished while still being raw and fun. Hats off to veteran Laidback Luke for giving the best performance of the weekend.

Andrew Rayel – Before last weekend, I knew very little about Andrew Rayel. What I did know was that he is signed under Armin van Buuren’s “Armada Music” label and often makes guest appearances on the legend’s radio show “A State of Trance.” So, going into Andrew Rayel’s Skylab set, I was prepared for slightly sleepy trance. I was so wrong.

The 23-year-old jumped into his set with the fervor of a veteran DJ, excited about every track he played. Sticking mostly to progressive house favorites (Swedish House Mafia, Calvin Harris, etc.), Rayel mixed songs effortlessly while hyping the crowd up. Maybe Skylab was just lucky enough to catch one of his more upbeat sets, but either way, I was surprised in all the best ways possible.

Borgore– Borgore’s reputation proceeds him, and not in a good way. With the hashtag “Booty for Borgore” littering his social media pages and a plethora of questionable song lyrics that many would call “misogynistic,” Borgore has come to be known more for his antics than his music. However, though I kind of hate to admit it, I loved his Skylab set. I was ready for the Israeli DJ to come out, yell “put your f-ing hands up” a million-plus times and play whompy dupstep with some trap and rap thrown in. While I wasn’t totally off on the genre choices, Borgore kept his set varied and didn’t yell on the mic too often. The performance was fresh and kept the bass-loving crowd moving the whole time. I’d have to say, if given the chance, I’d see Borgore again.

Skylab may be over, but Denver’s fall EDM lineup is just getting started. In the next three months, our beautiful state will be graced with the presence of dance music greats like, Benny Benassi, Kaskade, Mako, Cash Cash, Tritonal, 3lau and The Chainsmokers before culminating in the biggest New Years Eve party in the country, Decadence. The Decadence lineup this year is out of this world, so buy your tickets quick! You will certainly not want to miss ringing in the new year with Hardwell, Galantis, Jack U, Deadmau5, Bassnectar, Excision, Odesza, What So Not.., And the list goes on and on.