Posted On August 28, 2014 By Kristine Navas In Advice For Women, The Scene, Up For Debate

Why Beyonce is the Worst Role Model

With the highly anticipated VMA performance now over and all the gushing aside, the question lingering in my mind is why are we praising the self acclaimed “Queen B.” Is it her voice? Is it her dancing?

Honestly, I doubt people even know why they praise her. Yeah, her voice is good and she can do some mad choreography, but you never really hear anything about that. If it’s about her performance it’s more about how amazing her butt looked, OMG she’s pregnant, or she’s totally putting those divorce rumors to rest. Aside from the fact that it’s admirable that she came from nothing, there’s nothing of Beyonce I would aspire to be and here’s why…

Her claim to fame began with Destiny’s Child, which I will totally admit to loving. I’m all about women empowerment and not needing anyone but yourself. So hearing songs like Independent Women and Survivor were totally up my alley. Scroll forward to 2009 when you began to see a change in her tone, with songs like “Why Don’t You Love Me?” and most recently “Jealous.” Independent women don’t beg. They don’t worry about losing their man or woman. No independent woman would need another person. A significant other is only the sprinkles on top, not the whole damn ice cream.

She Supports the Degrading of Women

Despite what the screen on the back of her performance said this past Sunday, Beyonce is no feminist. Does “Yonce” even know the definition of a feminist? Sorry, but screaming “Bow down bitches” doesn’t make you a feminist. Neither does writing it on a screen. Beyonce is anything but a feminist. A true feminist is all about the betterment of the female gender. Equal pay, equal power…those are feminist movements. Singing songs about “bowing” and kneeling down in the back of the limo isn’t exactly something to aspire to. Sexualizing is all good as long as it doesn’t come a the cost of your integrity and the image you portray to your toddler daughter.

She Owes Everything to J

I’ll just put it plain and simple: Beyonce would have never made it as a solo artist without Jay-Z. Need proof? It’s simple. Who rapped on her first single “Crazy In Love?” Who did she feature in her hit “Bonnie and Clyde?” Who is basically in every music video she puts out there nowadays? It’s not that cute Calvin Klein model. If J ain’t there, then either is B. I’m all for ride or die, but when you can’t do a music video without a cameo from someone else, there might be a problem. 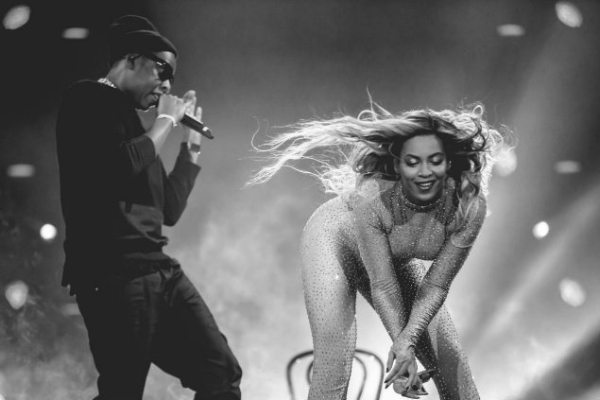 Everyone is entitled to idolize whomever they choose, but in the end we should be aspiring to better our gender. We should be working our asses off to get those CEO positions, not working our ass in those positions to land the CEO.

Kristine is a warrior in the advertising world by day and dreamer by night. Her love for words has lead her to her outlet of writing and book hoarding. A cup of tea, good books, awesome tunes and beautiful travels sew her together. You'll find her in a constant coma of wanderlust so be sure to follow her adventure on Twitter and Instagram at @thisiskrissyy.