Posted On July 9, 2014 By Rachel Harrison In Buzzworthy, The Scene

It’s already been established that the best time to be a kid ever in the history of the universe was the 90’s. Many awesome factors contributed to this, but none quite as sugary as some of the epic treats. Let’s take a moment to remember the deliciousness and be grateful that nobody really cared about whether or not anything was organic back then. 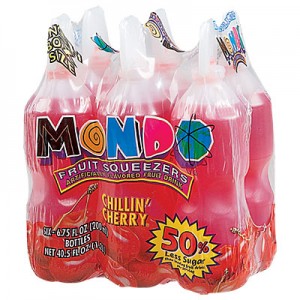 It’s hard to say what was more awesome about the Mondo/Squeezeit drinking experience. The cool plastic bottles with the twist-off caps or the fact that you were getting away with drinking 100% pure sugar water. With cool colors and flavors like Legendary Berry and Primo Punch, these things were basically kid crack. Looking back as an adult, the “50% less sugar” label on Mondo is laughable. 50% less sugar than what? Something that’s 150% sugar? 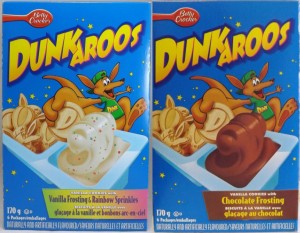 There were many different ways to eat Dunk-a-roos, but the correct way was to eat all of the cookies, which were like whatever okay, and then scoop up all of the frosting with your thumb and shove your frosting covered finger in your mouth. Dunk-a-roos are no longer widely available due to the fact they caused children to experience the greatest joy in life too young. Studies showed 99.9% of children who consumed Dunk-a-roos in their youth went on to never experience anything close to that level of ecstasy again, resulting in problems such as drug use, depression, and attempts to replicate Dunk-a-roo icing using Greek yogurt. Greek. Yogurt. I mean, come on. 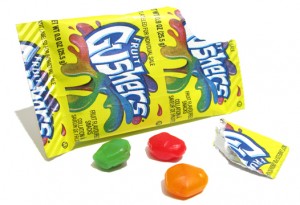 Gushers are tiny sweet and sour gummy pouches filled with a sugary liquid substance made primarily of fairy dreams. By some sort of divine miracle, Gushers are still available in grocery stores today. Though it’s a slippery slope to buy Gushers. Once you realize that you’re an adult and can purchase and consume as many Gushers as you want, you will likely never stop eating Gushers. Dangerous side effects of an exclusive Gushers diet include erratic behavior, hallucinations, night sweats, and permanent tongue discoloration.

Fruit Roll-Ups/ Fruit by the Foot 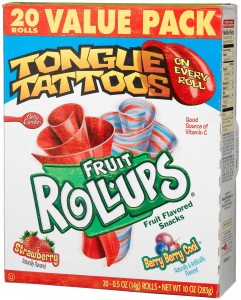 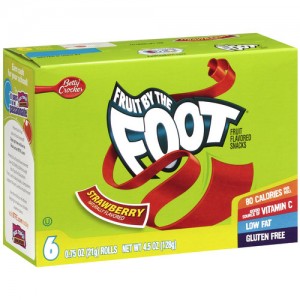 I don’t know who the food companies think they’re fooling by adding “fruit” in the name of products that are really just vaguely inspired by fruit flavors. Regardless, these treats were the epitome of chemically goodness. Delightfully sticky, the fantastic part about Fruit Roll-Ups and Fruit by the Foot was that they’d stay in between your teeth for months, adding a hint of fake fruity flavor to your saliva. Thanks for cavities, Betty Crocker! 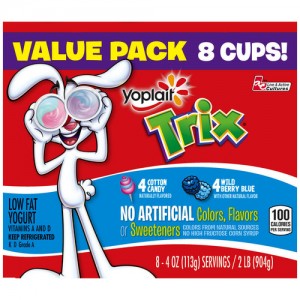 The best yogurt ever will forever be Trix Yogurt. Flavors included Wild Berry Blue, Very Berry Watermelon, Strawberry Banana Bash, Raspberry Rainbow, Triple Cherry, and Cotton Candy. COTTON CANDY! The yogurt was not only colorful, but also freaking delicious. There was nothing quite like the wave of excitement upon finding a pack of Trix Yogurt in the fridge. Yoplait still manufactures Trix Yogurt but according to their website it’s now “without high fructose corn syrup, artificial flavors, or sweeteners. It’s still the same bright, fun, colorful snack, only better.” Somehow I find that hard to believe. I think a taste test might be in order.