Posted On August 23, 2014 By Renée Rapin In Buzzworthy, The Scene

Oh China. They are taking sun protection to the next level. Why bother putting sunblock on your face when you can just cover it entirely? The newly invented “face-kini” is here and taking the world by storm. 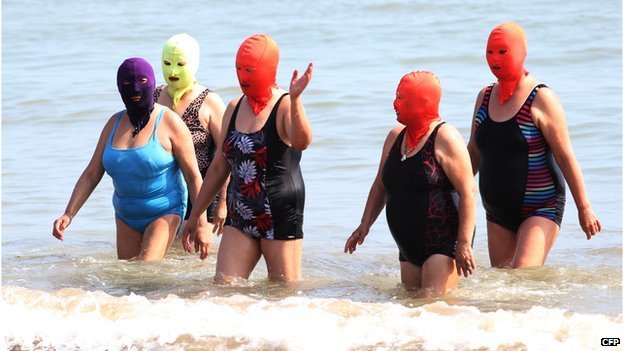 What originally started as an “old woman style” is now a huge fashion trend on Vogue. Yeah, I don’t get it either. You can see more here.  Kinda kinky no?

So basically there’s a bunch of robbers or spidermen running around on the beaches of China. The country believes white skin is a sign of prosperity and classic beauty. In addition to the face-kini, they have created all sorts of  gadgets to hold sun blocking umbrellas, sun sleeves, capes, etc. Can’t wait to see what happens next…

Man Fakes his Own Death to Escape Marriage

Alex Lancaster and Tucker Blandford had a typical love story. The met, went on a few dates, quickly fell for each other and Tucker proposed. Alex was close with Tucker’s mom, they all seemed happy. The wedding planning was in full swing when something changed. Someone called Alex claiming to be Tucker’s father. He said Tucker was incredibly depressed and threw himself in front of a car. Whoa. Alex is hysterical, calls his mom and guess what? The mom knows nothing of his death nor their planned wedding. She says Tucker is alive and doing fine. Poor thing. Tucker tried apologizing but Alex won’t take it. Good for her. My favorite part of this whole thing is Tucker’s excuse, “I know I’m a terrible, awful person. I know I shouldn’t have told her I was dead, but I didn’t know what else to do.”

REALLY? You couldn’t have, oh I don’t know, told her you didn’t really love her and did not want to get married? “I thought if I could just postpone everything it would be better.” Um, minor flaw there sir, you can’t really postpone a situation if you’re fake dead. You eventually need to come back. And even if you don’t, that’s not a postponement, that’s just an end. Oh people. But you know what, maybe we’re missing some details here. Maybe, she was actually crazy and the only way out for him was to fake his own death. Guess we’ll never know…