After Kentucky’s loss to UCONN, the question remains – how many of their players will be back for next year?

Among the list of colleges that have produced current and active NBA players, the University of Kentucky is #1 with a total of 22 players sent off to the pros. In the championship game vs. UCONN, they started 5 freshman. Their roster carries with it the potential for another great season next year…if their 5 to 7 best players return.

SBNation and DraftExpress, however, have at least 3 of Kentucky’s starters going in the 1st round of the 2014 NBA Draft. 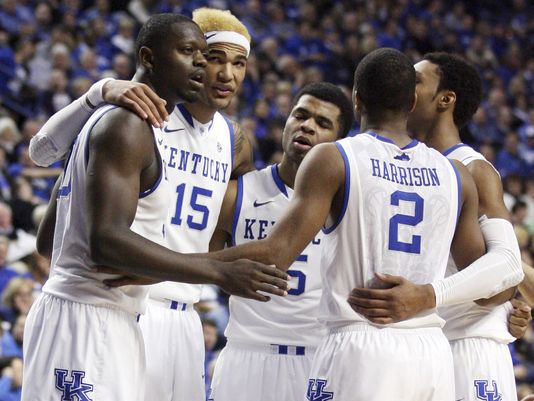 Freshman Julius Randle, a 6’9 PF, could go as high as no. 4 in the draft. Kentucky’s 7 foot sophomore, Willie Cauley-Stein, might go around no. 12 and freshman James Young is looking at no. 25. That’s 3 key players good enough to be drafted in the 1st round. Other Kentucky players to keep an eye on are both Aaron and Andrew Harrison, Dakari Johnson, and Alex Poythress. Those four, however, look like they may stick around for at least one more year of schooling before entering the draft.

None of this means that Kentucky is the only team producing NBA talent, though. UCONN also ranks among the top schools with current and active NBA players. Look for star PG Shabazz Napier to go sometime in the 2nd round of this year’s draft too.