Posted On January 21, 2015 By Ryan Daugherty In Sports, Sports Takes

Midway Through The Season, The Dallas Mavericks Are Fringe Contenders

This season, the Western Conference has been as competitive as ever. Every single night a win or a loss could raise or drop you 2 or 3 spots in the standings. The West is hell, and there are eight or nine teams who have a legitimate case to come to represent it in June.

The Dallas Mavericks currently sit in 5th place in the West, but are only 2 games out of 2nd and 4 1/2 out of 8th place. 42 games in the season they are 29-13, but they still have some areas to greatly improve. Their offense is elite, arguably the best in the league, but defense and rebounding is where they are hurting. The Mavs are 2nd in the league scoring 108.4 ppg, but they are 23rd in the league giving up 102.3 ppg.

The Mavericks have one of the best starting fives in the NBA, especially with their trade for Rajon Rondo in December. The Rondo trade was a fantastic one, and it did improve the team, noticeably on the defensive side of the ball. He has been inconsistent as of late, and his jump shot is still as bad as advertised, but that isn’t why the Mavericks traded for him. The Mavs perimeter defense before the trade was horrendous. The amount of wide open 3-pointers they gave up was laughable. Upgrading from Jameer Nelson to Rajon Rondo defensively was primarily the reason the trade was done. 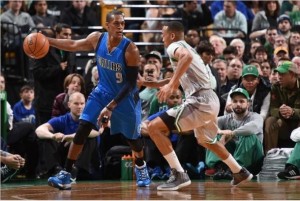 Here is an interesting stat on Rondo’s defensive impact. When Rondo is on the floor, the Mavericks allow 95.2 ppg per 100 possessions, which is 2 points better than Golden State’s league leading 97.2 ppg per 100. Rondo makes a difference. He does hurt the offense slightly, but that’s perfectly fine when his presence on the floor flips the Mavericks defense from horrendous to elite.

Alongside Rondo, Monta Ellis has been outstanding this season, averaging 20.3 ppg on 45% shooting. Monta’s defense leaves a lot to be desired, but he has carried this Mavericks team offensively for the first half of the season. Statistically, he has been one of the two best “crunch time” players in the NBA (with Mike Conley), and there have been a number of games where he has taken over, notably back to back games in Chicago and Milwaukee in December.

Chandler Parsons has not lived up to his 3 year $45 million contract, but no one with a rational brain expected him to. Signing Parsons was a great move, and a better way to look at it is he and Dirk Nowitzki combine for $23 million this season. Parsons is averaging around 15 ppg and 6 rpg on 44% (35% 3PT), but it is his defense which has greatly improved. He is still not a great defender by any means, but his on-ball defense has looked better and better as the year has gone by.

Parsons main problem is his inconsistency. One night he can give you 25 points on tremendous shooting, but the next night he can shoot 3-11. If the Mavs want to go far in the playoffs, Parsons needs to be far more consistent on both sides of the floor.

Of course there is this guy still named Dirk who still can take over a game when he wants to. This isn’t the same Dirk of 3 or 4 years ago, but opponents still fear him as much as any player in the league. He has had stretches of weeks at a time where he looks like he doesn’t belong on the court, which is expected at nearly 37 years old. On the other hand, he has had games where he still looks like a superstar. Dirk doesn’t care about stats of any kind, he only wants to win. To put it this way, Dirk is averaging 18.7 ppg on 46% shooting, and this is his “worst” season since his his second year in the league.

The most important part of Dirk’s game is limiting his minutes for the playoffs, and Rick Carlisle has done a fantastic job in doing so, playing Dirk just under 30 minutes a game. You may not see Dirk dropping 30 points on the regular anymore, but once the 4th quarter hits, a rested Dirk means trouble for opposing teams. 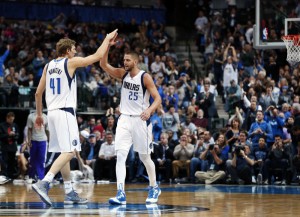 The Mavericks MVP this season has been none other than Tyson Chandler. Ellis has taken over as the “Batman” of the team, but Chandler impacts the game in ways no one else on the team does. Chandler is averaging 10.8 ppg and a career high 12.3 rpg on 67%. He has had 18 double doubles this season, and his defensive presence around the rim makes the Mavs contenders.

Chandler’s energy and leadership are things that elevate the team as well. Just like in 2011, he is not the best player on the Mavs, but he is undoubtedly their most important player. If Tyson Chandler is not named an All Star this season it will be a travesty. Outside of Marc Gasol and maybe DeMarcus Cousins, no center in the league has had more impact towards their team than Chandler. If Chandler goes down with an injury, then the Mavs title hopes and possibly playoff hopes are over. 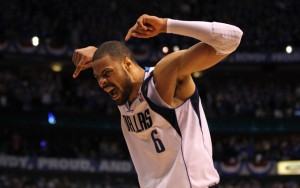 One of the biggest question marks of the Dallas Mavericks is their thin bench. There was a price to pay for Rondo, by losing bench depth in Brandan Wright, Jae Crowder, and Jameer Nelson (let’s be honest, he is a bench player at best at this stage of his career). Their bench consists of Devin Harris, J.J. Barea, Richard Jefferson, Greg Smith, Charlie Villanueva, Al-Farouq Aminu, and newly acquired Dwight Powell.

At times the bench is firing on all cylinders, and Carlisle can get away with it with the ability to put any of five All-Star caliber players in any lineup, but they can’t rely on the bench to be a consistent contributor in the playoffs. What the Mavs greatly lack is a backup center. Greg Smith has potential, but he is far away from being a nightly contributor. New addition Dwight Powell has played pretty well in his limited minutes, but he is a tweener like Brandan Wright.

The most popular name thrown out for the Mavericks is free agent center Jermaine ‘O’ Neal who hasn’t played in over a year. ‘O’ Neal would be a great addition with his defense and rebounding, but it is unclear whether or not he will play basketball this season.

At this current moment, to say the Mavericks are a top contender for the championship or even a trip to the Western Conference Finals would be a head-scratcher. Their bench is too thin and their inability to rebound the ball against top teams is a bit frightening. They do have an outside shot however at contention. Any team in the Western playoff contention can beat anyone in a playoff series. If the Mavericks make it to the Western Conference Finals, it will be because they acquired a solid backup center and their defense GREATLY improved.

I wouldn’t bet any money on it, but a second round appearance and a hard fought series would make a great season for this Mavericks team. After their most recent victory at Memphis, the Mavericks defense has shown they can get stops when they need to. Doing that on a consistent basis is still yet to be seen, but if they can then they have a real shot of coming out of the West.